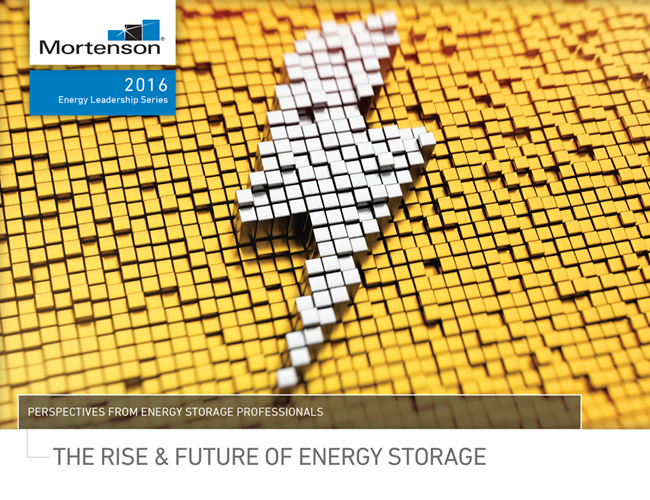 Mortenson has maintained it's top renewable energy construction firm status despite some chaos around how storage fits into the world’s energy mix and how to introduce it into the grid. One thing is certain: reliable, affordable storage is already transforming energy distribution and will be a primary driver going forward.

A new study indicates that a majority of storage professionals see potential for the industry when storage is paired with renewable energy generation, and while interest remains in alternative technologies, a large majority see lithium ion technology dominating the battery sector of storage.

All of these factors played a role in Mortenson’s entry into the market. “When you look at our history in energy – wind and solar specifically – we’ve always been on the forefront of emerging technologies,” according to Brent Bergland, who as General Manager of Mortenson’s High Voltage Transmission group is tasked with building the new Energy Storage division. “In the case of energy storage, it is certainly a logical extension of our existing capabilities as a company.”

As the top solar EPC firm and the top wind energy builder in North America* Mortenson has been an early entrant into renewables markets, building a reputation for innovations that have driven costs down and contributing to the viability of those technologies as a significant part of the electrical grid. Storage has been a challenge in the renewables matrix, but the new report indicates that while the regulatory environment is still chaotic, industry professionals understand that as it becomes a part of the grid, governance will begin to take shape.