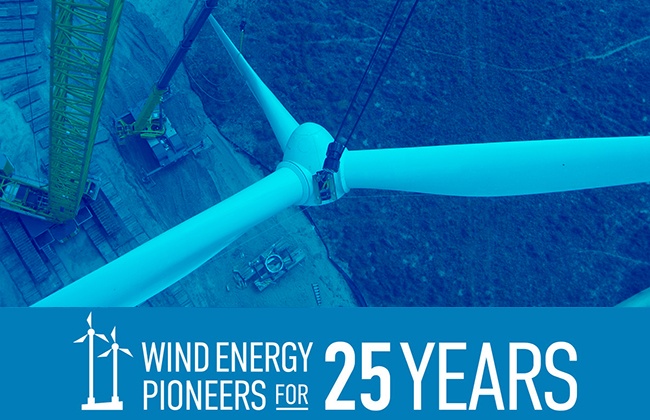 Mortenson entered the wind industry in 1995 with a single wind turbine project in Iowa. Twenty-five years later with projects that have spanned North America, the company stands today at the forefront of wind power ranked as the top engineering, procurement, and construction (EPC) firm in the industry. Mortenson has expanded further into other power and renewables industries over the years, which now collectively represent over a third of its business and includes work in wind, solar, transmission, high voltage electrical and energy storage.

“Reaching this milestone is really a recognition of all the customers who we’ve been fortunate to partner with and deliver exciting, meaningful projects across the U.S. over the years,” said Tim Maag, vice president and general manager at Mortenson. “More than the number of projects completed or turbines erected, we are most grateful for the relationships we’ve built, the projects we’ve delivered and the communities we’re connected to through our work.”

The wind industry has continued to flourish across the U.S. as a viable source of clean energy and is a favorite of power utilities due to its low cost of production and cleaner footprint. With momentum at its back, wind is a proven and invaluable renewable energy source from coast-to-coast. Looking ahead, Mortenson sees several key trends that will shape the wind industry and U.S. power market over the next five years as the electricity generation mix continues to experience rapid change.

Large Platform Turbines
The wind industry is seeing a strong movement toward larger turbines with manufacturers now offering up to 5MW and 6MW platforms. These larger, taller turbines can help power producers make wind economical in more locations. However, due to the overall size there are significant impacts to design, installation methods, and construction schedule and costs that need to be considered to determine widescale viability.

Preparing a site for larger turbines is adding time and costs to projects and developers need to carefully plan for those needs when permitting projects sites for construction, including corridors and erection areas. Cost increases can be controlled by engaging an EPC early to minimize turbine locations with significant cut/fill needs, optimize delivery routes, understand geotechnical considerations to reduce cost uncertainty and develop mitigation strategies.

Energy Storage
The nation’s energy infrastructure will continue to undergo a significant transformation over the next 5 years due in large measure to the emergence of larger, less costly and more efficient battery energy storage. Battery storage is a disruptive technology that is helping transform how electrical power is generated, distributed, and consumed in the U.S. With regulatory and permitting changes underway, battery storage will benefit the electrical grid by supporting dynamic generation and demand, which in turn supports increased levels of wind and solar power production.

Energy storage technology continues to advance rapidly and will make the overall U.S. energy system operate more effectively. Growing in complexity, Mortenson is seeing a trend with customers who want to place energy storage solutions in locations closer to renewable energy projects or to load centers. In doing so, there are increased land development issues and greater financial impacts, which require more detailed development planning up front.

Policy
The role of government policy in the growth of wind energy has been vital. The national Production Tax Credit (PTC) is by far the most influential policy the industry has seen, which helped launch it and sustain the industry as it matured through several economic cycles. The PTC was scheduled to phase out in 2019 but was extended to 2024 at 60 percent of its value, and it continues to spur investment and growth in U.S. wind power. Growth in wind is expected to remain strong when the PTC sunsets in four years, signaling the policy has been effective in its purpose.

State-level renewable portfolio standards (RPS) are further encouraging growth of renewable sources. According to the American Wind Energy Association, 30 states plus the District of Columbia and Puerto Rico have renewable energy targets. Increasing renewable energy use, and the cost savings associated with it, will continue to put downward pressure on consumer energy prices. It will also benefit the economy by creating more employment opportunities in the industry.

Transmission
One of the greatest limiters on the expansion of wind and renewable energy expansion is the availability of transmission and power delivery systems. It’s an ongoing need for utilities to continually build capacity to keep up with the volume of renewable energy projects coming online in varied and remote locations. Concurrently, the U.S. energy grid is experiencing greater constraints as energy production and demand has become more dynamic.

Mortenson sees ways to expedite projects with different delivery methods and the utilization of virtual design and construction tools. The company is also working with the industry to figure out the most effective ways to build and implement HVDC converter stations and transmission lines and implement Smart Grid technologies that support remote generation.

Repowering
According to the U.S. Energy Information Administration, wind energy was the source of about 7 percent of total U.S. electricity generation and about 42 percent of electricity generation from renewables in 2019. As wind production continues to grow, operations and maintenance strategies are vital to ensure high availability and to capture the largest return on investment for owners. Many existing turbines throughout the United States designed to last 20 to 25 years are reaching the end of their life expectancy or have obsolete technology that is no longer supported by the original equipment manufacturer.

Repowering has emerged as a way for turbines to be replaced or modified with modern technology, prolonging the life expectancy, increasing the capacity factor and minimizing maintenance costs. While repowering often doesn't result in significant increases in output due to limitations in interconnection agreements and electrical infrastructure capacity constraints, it does create opportunities for efficiency and reducing overall maintenance costs.


About Mortenson
Mortenson is a U.S.-based, top-20 builder, developer, and engineering services provider serving the commercial, institutional, and energy sectors. Mortenson’s expanding portfolio of integrated services helps its customers move their strategies forward, ensuring their investments result in high-performing assets. The result is a turnkey partner, fully invested in the business success of its customers.