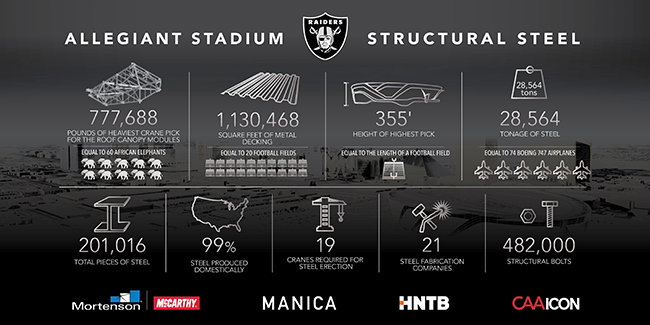 The Mortenson-McCarthy Joint Venture team joined the NFL Raiders to celebrate the “topping out” of the Las Vegas Stadium at a special ceremony held on the construction site. A major building milestone, topping out symbolizes and celebrates the lifting and placing of the last major roof module for the structure.The Design-Build project is approximately 58 percent complete and will be finished prior to the 2020 NFL season.

With more than 2,000 guests and workers in attendance, this milestone comes on schedule and nearly 21 months after groundbreaking. To date, the construction team has put in place more than 28,000 tons of steel, including 26 pre-assembled roof modules. With 99 percent of the steel being produced domestically, the scope of work has necessitated the participation of 21 fabrication companies. Nineteen onsite cranes, including three super cranes, were required to erect the highest beam more than 355 feet in the air – that’s approximately triple the height of the Statue of Liberty. With the completion of this milestone, construction continues on the interior of the building, as well as the roof and exterior enclosure.

Future home of the NFL Raiders franchise and UNLV Football, the Las Vegas Stadium will also host a variety of other sporting and non-sporting events and will feature 65,000, a retractable natural turf field, large operable walls that open to spectacular views of the neighboring Las Vegas Strip, and a variety of premium spaces throughout all levels. To get to this milestone, work on the project has included the removal of 895,000 cubic yards of dirt and the installation of 105,000 cubic yards of concrete, 12 miles of concrete drilled shafts, 28,564 tons of structural steel, and miles of piping among other materials. Workers will have contributed four million craft-hours to construction upon completion. Design partners include design architect, Manica Architecture and architect of record, HNTB.