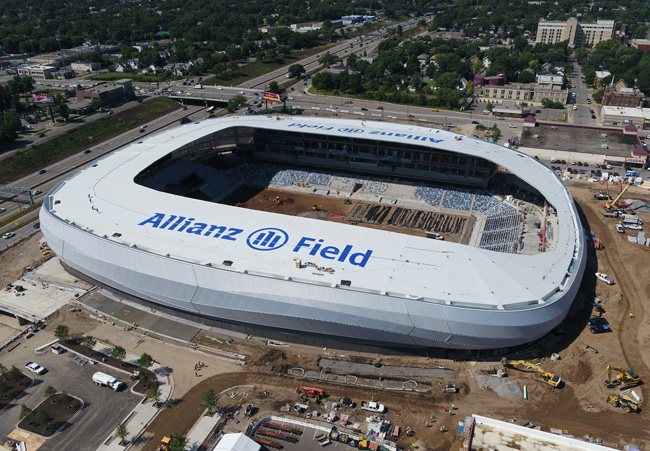 It has been more than eight months since Mortenson broke ground on Allianz Field, and last week the Minneapolis-based construction and real estate development company gave an update on its progress: construction is around 75 percent finished.

“To do that, there’s a lot of planning and a lot of people have to be on their A-game to pull that off,” Huber said.

Huber estimated more than 225,000 worker-hours have already been put into the project, and his team still needs to complete the stadium’s exterior, lay the grass playing surface, finish the seating bowl and handle seven to eight acres of site work around the stadium by the end of autumn.

As of the Aug. 28 news conference update, 8,800 seats — around 55 percent of Allianz Field’s fixed seating — had been installed. Seven of the 10 exterior panels of PTFE (polytetrafluoroethylene)-coated translucent mesh were up, with the remaining three to be added in September.

Construction of a roof deck above Allianz Field’s planned “Brew Hall” was recently started, and the area, which will be leased to groups and individuals, is targeted for a capacity of about 250 to 300 people.

Bruce Miller, Populous Architecture’s project principal for Allianz Field, highlighted the roof deck as one of several sections inside the stadium that will provide fans with different gameday experiences.

“The roof deck is going to be a great environment, sort of a SRO (standing-room only)-type atmosphere,” Miller said. “Great place to watch the game.”

The Brew Hall under the the roof deck will have full operable windows. “We call them airplane doors,” Miller said. “So the Brew Hall will be completely open to the field of play. So, we think this north end is really going to have a lot of activity and a lot of interest, kind of balancing out the supporters creating energy in the bowl on the south end.”

The south end referenced by Miller has already been dubbed the Wonderwall. The name references both the tradition of MNUFC supporters singing the Oasis song of the same name after wins, and the south end’s design as a single-tier, safe standing section with a capacity for 2,800 of the Loons’ loudest fans.

The east stand is comprised entirely of fixed seats, and, per Miller, deserves attention of its own. The architect revealed that his favorite view of the field is found in the east stand’s upper deck.

“In theory, that could be your worst seat in the house,” Miller said. “I think it’s a tremendous view. It’s really a special view.”

With Huber speaking to the stadium’s progress and Miller to practical matters, both made sure to give details about Allianz Field’s PTFE exterior skin.

He said the translucent, silver-colored mesh is intended to reflect the sky and provide flowing contours to pay homage to the lakes and rivers that help define Minnesota’s environment. According to Huber, it will be responsible for keeping the wind out to make cold-weather games a better experience for fans, and to help trap sound in to heighten the atmosphere during games.

McGuire was nothing but pleased with the progress of the club’s new home. He also said the project was on-budget, but that budget has increased over the past eight months.

“Soccer is played on real grass, everywhere in the world,” he said. “If we want to say we’re playing the world’s game, we want to be on pier with the rest of the world. We should play in facilities that are designed for the sport and the athletes and the fans. That means grass.

Referencing a number Allianz Field’s features designed specifically with soccer in mind, McGuire said the stadium will stand on its own as “the finest soccer-specific stadium in North America.”

“It won’t be as big as some, but I think it will be architecturally and aesthetically as fine as any stadium in the world,” he said. “The flowing nature of the design, the ability to have LED lighting that impacts the whole thing rather than just focal areas, those will be big elements of it. And, obviously, the intimacy of this — the fact that the farthest distance [from any seat] is 125 feet from the playing field itself.”

Fans in Minnesota will have to wait until 2019 for the Loons’ first game at Allianz Field, and it probably won’t occur early in March.

Minnesota United’s senior public relations director, Eric Durkee, noted the club expects to begin its 2019 campaign on the road. While undoubtedly a pragmatic move to try and avoid any messy Minnesotan spring weather, it will prolong the anticipation a bit longer. With 14,500 season tickets sold and a growing waiting list, that anticipation already is high.