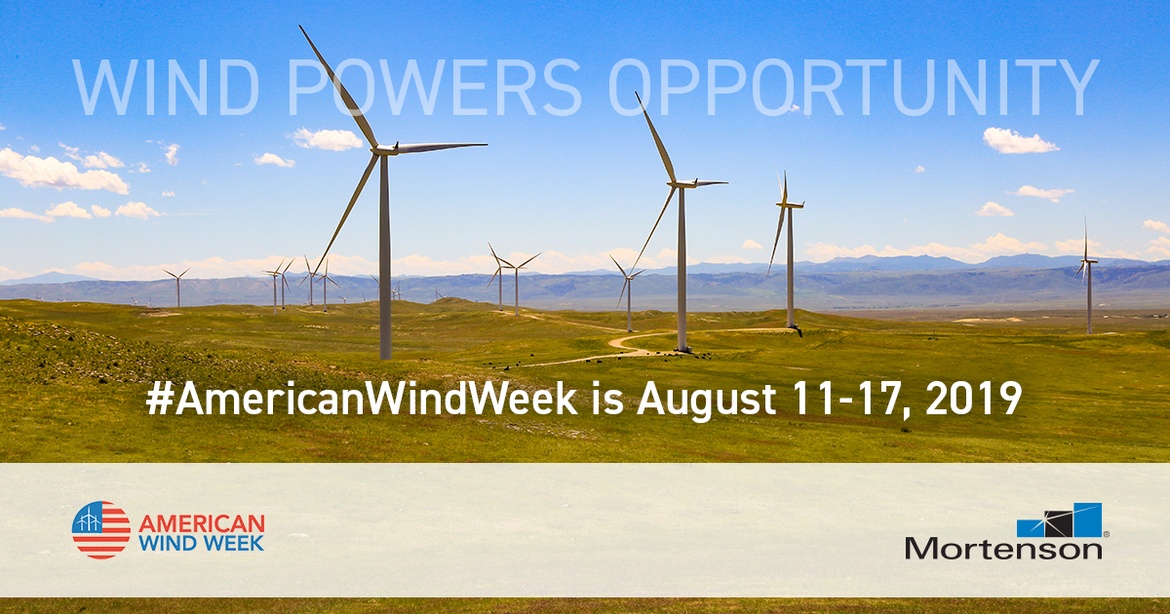 August 11 - 17 is American Wind Week and from farm to factory there’s a lot to celebrate—there are so many ways wind powers opportunity.

U.S. wind power has become a major economic development driver and is powering career opportunities for tens of thousands of American in all 50 states. If you were to name the fastest growing jobs in the U.S., you might be surprised to find that “wind technician” is second on the list, according to the U.S. Bureau of Labor Statistics.  Over 114,000 Americans across every state work in wind, many in the more than 500 U.S. factories that build wind turbine parts, making everything from blades, towers, and turbine nacelles to raw components such as fiberglass and steel.  Work for Mortenson's Wind Energy team - find opportunities here. Hear from Mortenson's Wind Energy team members about working for Mortenson in these short videos.

Wind also powers opportunities for the men and women who serve our country because many of these jobs are a particularly good fit for veterans. They require working at heights, familiarity with heavy equipment, technical skills, and ability to work independently and as part of a team – all skills fostered among those who serve our country. So it’s no surprise the wind industry hires veterans at a rate 67 higher than the average U.S. industry.

Wind powers opportunity across rural American as well. On top of job creation and billions of dollars in project investment, American wind energy brings substantial new revenue to rural communities in the form of property, state, and local taxes. Wind pays over $1 billion in state and local taxes and landowner lease payments every year. That helps fund school investments, road repairs, and upgrades to emergency services.

Wind is powering opportunity for family farmers and ranchers too. Every year landowners are paid over a quarter of a billion in lease payments for hosting wind turbines on their property. That’s steady income that can be counted on and is especially important during drought years or rising commodity prices. Wind is helping keep the family farm in the family.

Wind power will only continue to grow because it is renewable, emission-free and increasingly cost-competitive. Technological advances that allow turbines to reach stronger, steadier winds, and decades of experience in sitting wind turbines to maximize output, have helped drive down costs. As a result, wind’s costs have fallen by 69 percent since 2009, making it the cheapest source of new electricity in many parts of the country.

Big companies like General Mills, GM, Walmart and Google have recognized these cost declines and are choosing to power their factories, stores and data centers with wind because it’s affordable and protects them against future electricity price spikes.  And if you’re grabbing coffee at Starbucks, picking up supplies at Home Depot or enjoying a cold Budweiser, there’s an increasingly likely chance that product or store is powered by wind. Wind is powering opportunities in the products you use each and every day.

Wind powers more than our homes and businesses – it powers opportunity.