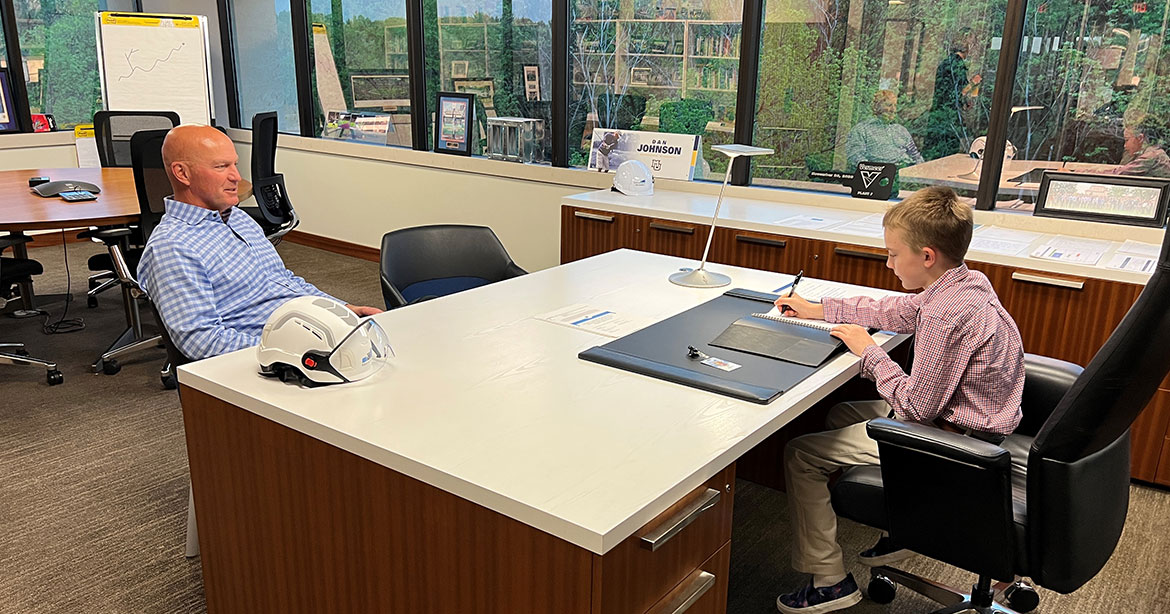 Many of you may know of and have a partnership with a Junior Achievement (JA) in your local community. You may be familiar with BizTown specifically, an experiential learning lab where students become adults for a day, running a business, managing money, and working as a team in a simulated economy. When the local Twin Cities JA outgrew their space, they purchased a 100-year-old building for redesign and refurbishing, to meet their specific needs and better serve the community. Our Minneapolis office did the work, though we’ve been a proud sponsor of Junior Achievement before then, with our commitment going back to Mort.  Our sponsorship provided us the opportunity to program a Mortenson shop space at BizTown (one of 18 shop spaces) and recently, the Minneapolis office signed a new 5-year commitment to continue our sponsorship of JA through 2026. 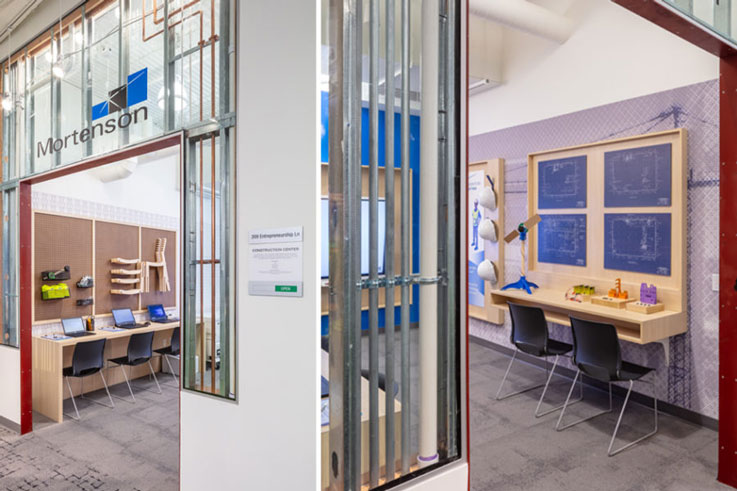 Earlier this year, we received correspondence from the mother of 5th grader, Will Bock.  Will had recently participated in BizTown at Junior Achievement North in the Twin Cities.  His job for the day was CEO of Mortenson!! After the event, he was very interested in meeting Dan Johnson…who, in turn, was interested in meeting Will.   Dan hosted a meeting of the minds at Mortenson Headquarters.  We caught up with Will and his mom to hear about the experience and got Dan’s thoughts on the meeting as well!

Q: How was your BizTown experience?

Will: BizTown was very fun, I got to do a lot of different things that I would not do on a normal day at school. BizTown helped me learn about many things like writing checks, depositing checks, and working in general. I also got to learn specific things about Mortenson that I did not know before. 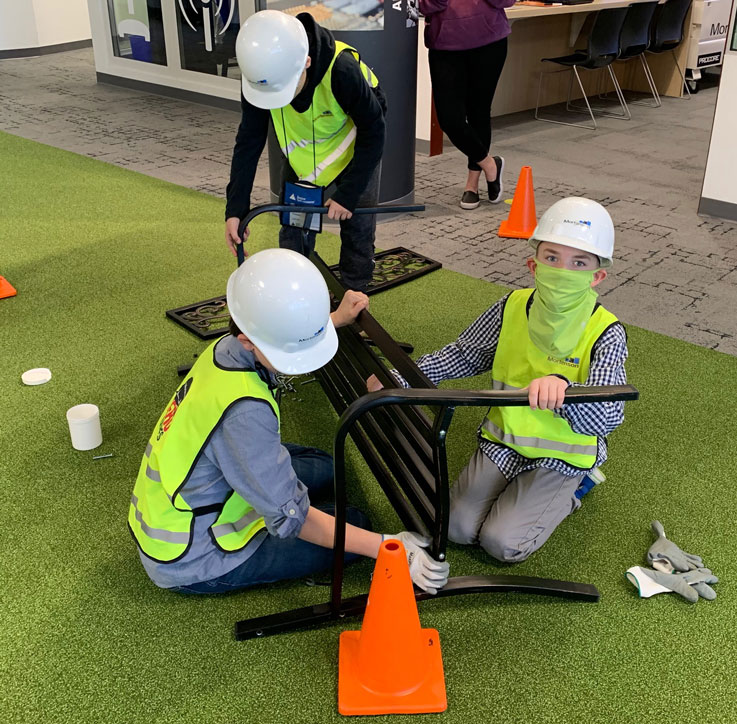 Q: Did you get to choose the CEO role at Mortenson or was it assigned to you?

Will: I had to write a resume and do an interview before we went to BizTown, the people that interviewed me decided I would make a good CEO at Mortenson.

Q: Why did you want to meet Dan after you took on his role at BizTown?

Will: When I got home, I asked my mom if there really was a CEO at Mortenson. She helped me research and find Dan, once I found out that there was a CEO and the office was not far from my house, I thought it would be fun to see what a real CEO did. I didn't actually think I would really get to meet him though.

Q: What questions did you ask Dan when you met him?

Will: I prepared 5 questions to ask Dan. 1) What education or training did you need for this job? 2) What jobs did you have before becoming the CEO? 3) How did you get involved with BizTown? 4) What are some of the other jobs at Mortenson?  5) What advice would you give me about a career in construction?

Q: What can you share about your meeting with Dan?  Did you tour the building or specific areas, or hang out in his office?

Will: When we arrived, there was a fancy name tag waiting for me and my mom. We waited in the lobby until Val came to get us. We took a little tour of the cafeteria, and we saw the hammer wall. The cafeteria is WAY better than the one at my school. Dan showed me the screens with the History and projects Mortenson has built. After that I got to try out the crane! I was actually pretty good at it. I was able to get a load of materials on the truck. After the crane, I got to hang out in Dan's office. He let me try on the new style of hard hat and I got to sit in his chair! 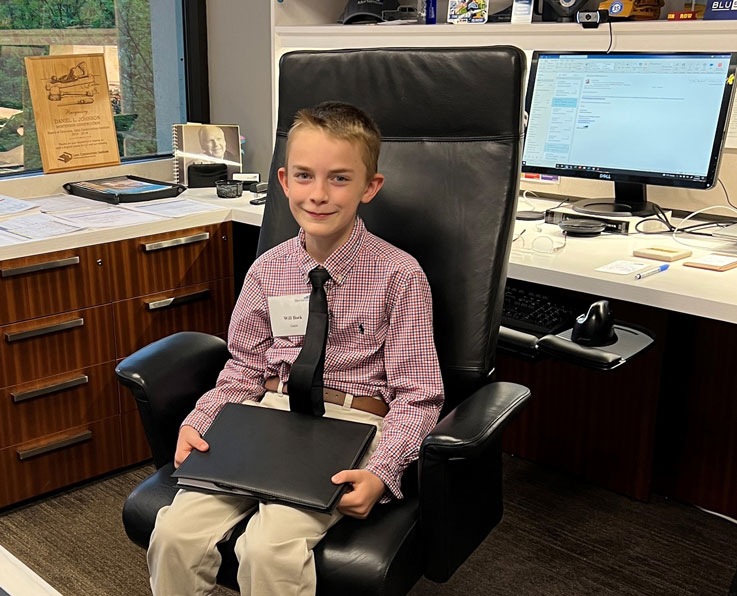 Will: I really liked the crane the best and the hammer wall. Dan's office was really big, and his chair was comfy ;)

Q: Did your time as CEO get you thinking about your future and/or career?  If so, how?

Will: Yes. Dan told me he went to college at North Dakota State University. So, when I got home, I looked up that college and the program he studied. I think that is something I would want to do in the future OR I would like to learn how to be a crane person. 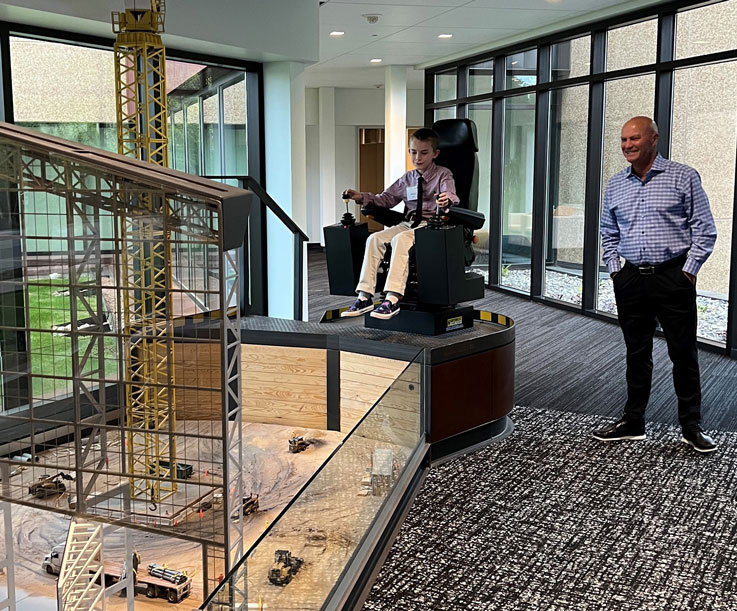 Q: What does the BizTown experience mean for you as a parent?

Shauna: I was a chaperone for the BizTown experience. While I did not work with the Mortenson student group, my group of kids learned so many good life skills and lessons. I appreciate the opportunity so many kids get to have because of BizTown. I feel like a lot of really authentic learning was happening that day. 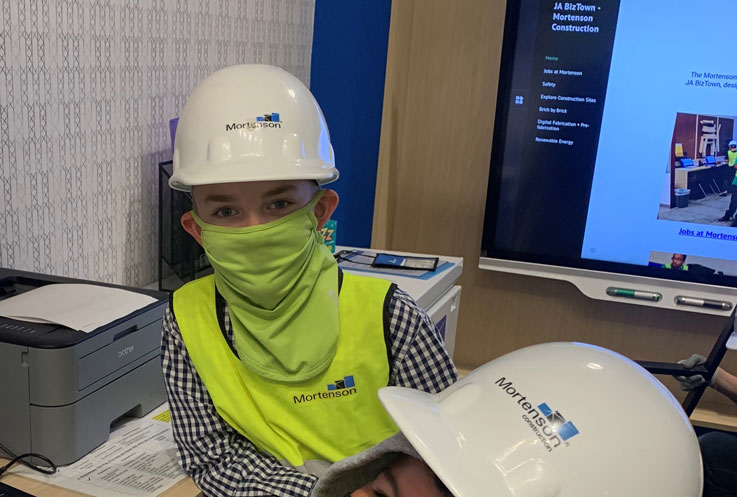 Q: Why is it important for local businesses to engage with such organizations and invest in our youth?

Shauna: I guarantee that Will would not have known about Mortenson if it were not for this experience. It is important for local businesses to engage and invest in our youth because they are your future employees. College and career readiness are so important, and it seems like we are even talking about it in elementary school now. I love the fact that Will is excited about a possible future career.

Q: What did Will talk about after his BizTown experience?

Shauna: Since Will and I got to experience BizTown together we were able to compare our experiences. He talked about how much he got paid as CEO, and some of the responsibilities he had as CEO, such as overseeing other people. He was very proud of the work he did that day.

Q: Why did he want to meet Dan Johnson?

Shauna: Will is a very curious kid by nature and always has a lot of questions. He first wanted to know what a CEO did in real life. Then he wanted to know if there was a CEO at Mortenson, if so, who is that person. He then said do you think I can meet him!? When I said I did not know if that would be possible, he wanted to at least send an email to share that he was CEO at BizTown. He was thrilled when Dan agreed to meet with him. I think Will was curious to compare his BizTown experience with the real-life CEO experience.

Q: What did he share about his meeting with Dan, CEO to CEO?

Shauna: Will could not stop talking about his time with Dan. I think we called everyone he knows on our way home. His first impression is that Dan is a very nice person and probably a really good boss. He was surprised that Dan was not wearing a suit (LOL). Will was very inspired to have an office at Mortenson one day and wanted to be sure to get into NDSU, I assured him we had a few years before we needed to worry about this. Will felt so proud that he was able to have this experience. He wore his Mortenson shirt and hardhat to school the next day and showed all his friends his other swag. This was definitely a memorable experience for this child, which we are both eternally grateful for. 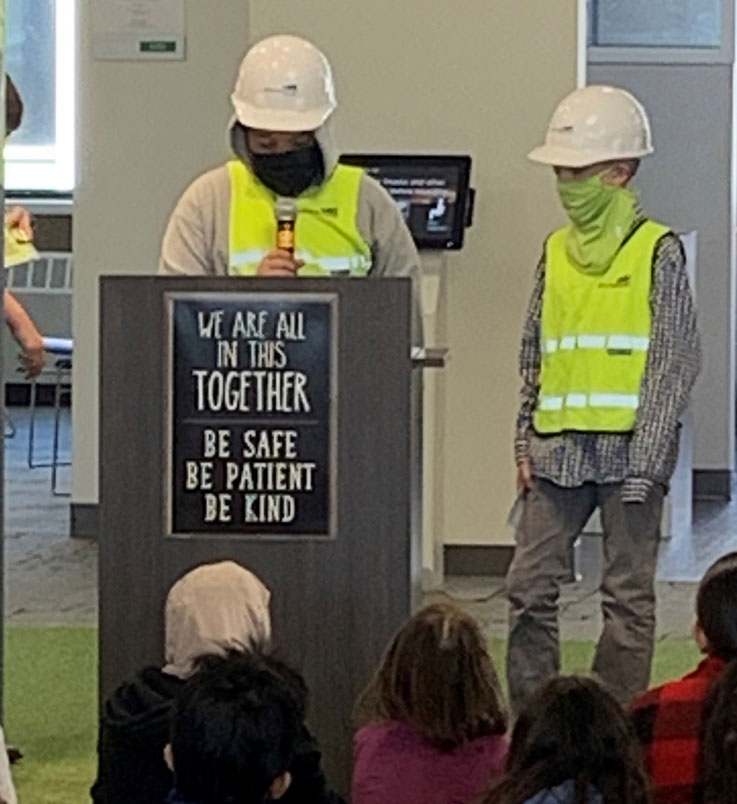 Dan shared his thoughts with us on the meeting with Will and our role in the community:

Will is a curious and engaging young person.  He was genuinely interested in Mortenson, the construction industry, and how he can be our CEO one day.

As we continue to try and attract young folks to our industry, Junior Achievement’s BizTown is a great way to expose our company and our industry to the next generation.  We need them!  Mortenson has always been a leader in participating and leading organizations like Junior Achievement, Big Brothers Big Sisters, Boys and Girls Club of America, etc.  These organizations are critical to our communities and our youth.

Will was inspired by his visit to BizTown, and he is genuinely interested in Mortenson.  He is a smart kid and quickly figured out that post-secondary education is an important aspect of his journey.  Especially if it is from NDSU!

It was very inspiring for me to see Will and his mom’s reaction to their visit to Mortenson.  We have something so special at Mortenson that even a 5th grader can see it! 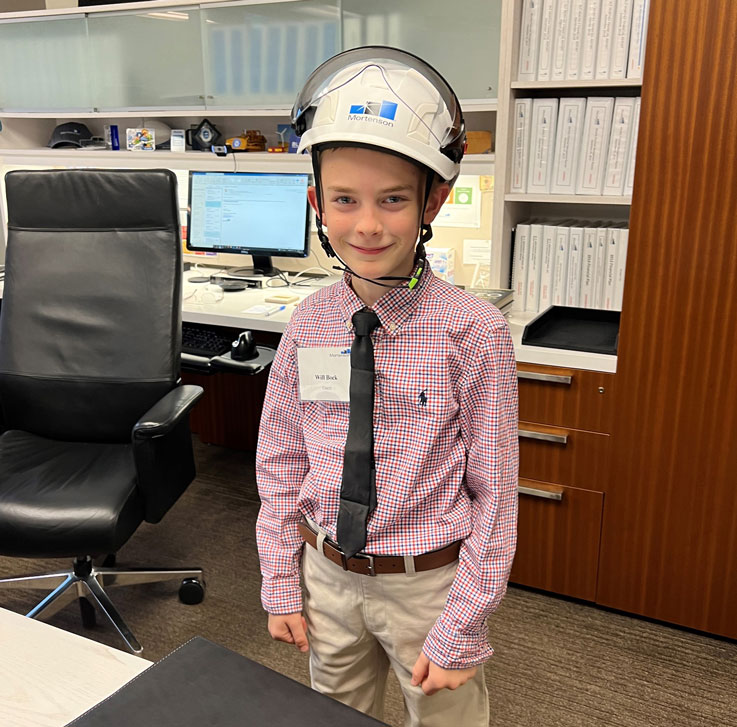 In a letter to Mortenson after the meeting between Will and Dan, Shauna wrote:

I really want to say a heartfelt thank you to Dan and the entire Mortenson crew. I have not seen Will so excited about something for a long time. He was definitely inspired, and I would not doubt that he will have an office over there one day. He actually asked if he could stay in touch with Mortenson so they don't forget about him. ❤ And I am not kidding when we got right home and looked at the admission requirements for NDSU, he actually asked me what middle school he would need to attend to go there.   Thank you again for this opportunity to meet with Dan. It is not something either of us will soon forget.

Sincerely, Shauna and Will Bock (Future CEO of Mortenson) :) 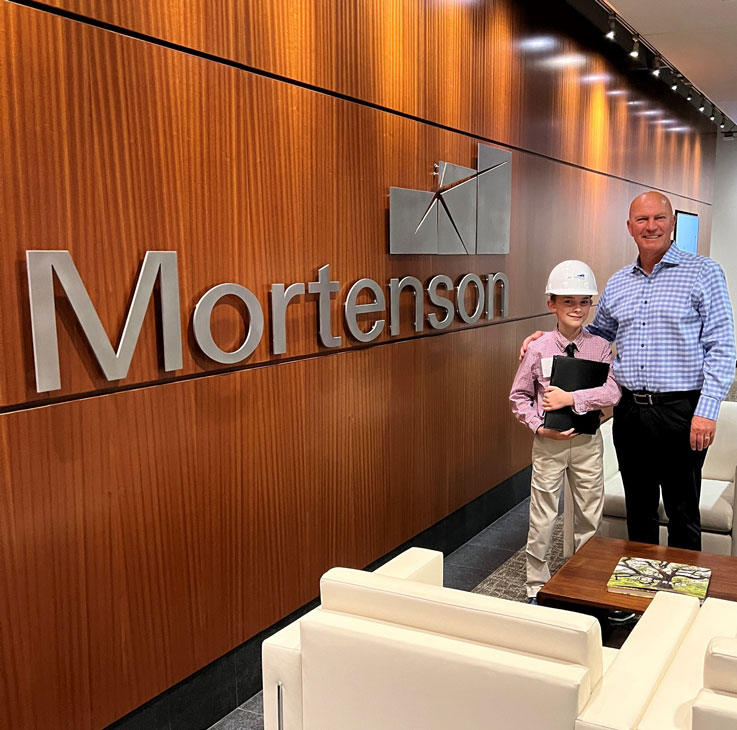 We shared this experience with our community partner Junior Achievement North who commented:

“We feel proud that Will’s day at BizTown was such an impactful one, and that he was excited to continue his learning to discover what other skills and experiences were gained along Dan’s journey to becoming CEO at Mortenson.

Thank you to everyone at Mortenson who made this unique opportunity for our student a reality! As we work to connect students to real-life skills and careers, we are thrilled to have partners like Mortenson that have a deep commitment to supporting young people’s learning.”  -Sara Dziuk President & CEO, Junior Achievement North

Learn more about our Community Impact Program at:
www.Mortenson.com/DoSomethingGood