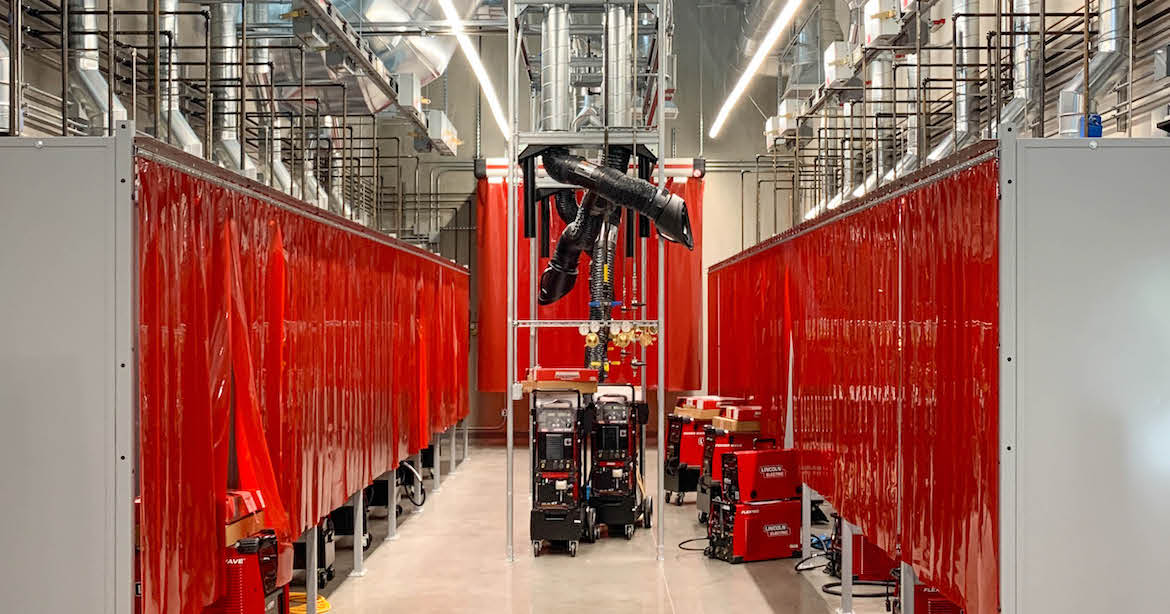 Last September, a 32,245-sf training center, owned and operated by Portland Community College, opened on 17.5 acres in Columbia County, Ore. The training center, which cost $21.37 million to build, houses the community college’s ﬁrst-ever apprentice-based manufacturing training program. It is also the ﬁrst building that the college constructed under a progressive design-build delivery method, working with a building team led by Mortenson Construction.

The training center is part of the Oregon Manufacturing Innovation Center (OMIC), a public-private initiative whose ﬁrst building—a 33,800-sf research and development facility operated by the Oregon Institute of Technology, in collaboration with Oregon State University and Portland State University—opened in 2017 across the street from where the training center is today. And last August, OMIC broke ground on another R&D center that, when completed, will focus on additive manufacturing.

The Columbia County OMIC campus is one of the latest examples in the U.S. of higher education teaming with government and industry to combine classroom learning, applied research and development, and workforce training. In the speciﬁc case of the OMIC campus, the stated goal is to serve the region’s advanced manufacturing, and to close the skills gap by creating opportunities for economic mobility in the metals manufacturing industry.

WORKER SHORTAGES ARE A MAJOR CONCERN

Andrew Lattanner, the PCC training center’s director, explains that the OMIC concept stemmed, in part, from a trip that several local business and civic leaders took to England, where they marveled at the University of Sheﬃeld’s Advanced Manufacturing Research Centre, founded in 2001, a network of R&D innovation centers whose 500-plus researchers and engineers work with more than 125 large and small industrial partners from around the globe. The Centre is part of the AMRC Group, a cluster of facilities for industry-focused R&D of technologies used in high-value manufacturing sectors. In 2011, AMRC became part of the government-backed Technology Innovation Centers, branded as the Catapults, which have nearly 5,900 industrial partners.

Increasing interest in these kinds of academic- government-private sector interactions is now ampliﬁed by trepidation that manufacturing is not attracting enough qualiﬁed workers to meet projected construction demand. A recent report from Deloitte and The Manufacturing Institute predicted that, left unabated, the manufacturing skills gap will leave 2.1 million jobs unﬁlled by 2030, and could cost the U.S. economy as much as $1 trillion.

The training center, says Gary Sutton, PCC’s project manager, focuses on heavy industry that includes machine welding, mechatronics (a combination of fabrication, electrical, and robotics), and computer-aided design. The single-story building divides evenly into two sections: one half is for 3D printers, fabrication labs, welding benches; the other half is for what Sutton calls “didactic spaces” such as oﬃces and classrooms as well as computer and programmable logic controller (PLC) labs.

Lattanner acknowledged, when interviewed in December, that PCC was “still getting to know” the building; for example, the mechatronics space had been readjusted twice. “The building is designed for programming ﬂexibility and transparency,” he noted.

Sutton says the community college’s decision to go with a design-build delivery method for the training center was a “natural progression” from previous delivery methods it had tried in the past. He says he liked that the project’s GC was on board right from the start because “they’re schedule oriented, and they kept the project on track.” (The training center was completed in just 364 days.)

Mortenson and Hennebery Eddy Architects, which jointly submitted a proposal for the training center, helped guide PCC with its site selection and design phase strategy for the Columbia County project. In the middle of its construction, Mortenson was able to accommodate PCC’s request to install a two-ton bridge crane into the building by revising an exterior welding canopy to handle the added load.

Sutton says that PCC hired Mortenson, in part, because of the ﬁrm’s previous involvement as GC on the $33 million, 63,000-sf John W. Walstrum Center for Advanced Manufacturing Technology, which was the ﬁrst major design-build project for the Washington State Board of Community and Technical Colleges. Walstrum Center, which is owned by the State of Washington Department of Enterprise Services, creates a new main entrance to Clover Park Technical College, near Seattle. Its program focuses on training students for the aeronautics, aviation, and manufacturing industries.

Walstrum Center, completed in 2019, emulates real-life industry environments that bring research and application together to promote Lean principles and a continuous improvement cycle. Spaces are organized around a top-lit central atrium, called the 5th Lab, which provides for interdisciplinary collaboration, demonstrations, displays, and industry events. A two-story research wing with oﬃces, classrooms, and the mechatronics lab forms one side of the atrium. High-bay spaces for CNC, manual non-destructive testing, and composites wrap around the other three sides.

TARGETING A RANGE OF POTENTIAL TRAINEES

Clover Park Community College wanted to create a center for interdisciplinary collaboration between its advanced manufacturing programs that had been located within different buildings on two separate campuses. Bringing these programs together on the main campus provides an opportunity to implement a model for student competency that promotes personal eﬀectiveness, along with workplace, academic, technical, and management skills.

Other community colleges are considering this strategy as well. Washington State’s Department of Enterprise Services is currently in the pre-design phase, with RGU Architecture, to replace three outdated facilities on the campus of Wenatchee Valley College with a 69,980-sf Center for Technical Education and Innovation that will house an advising station, networking areas, an industry training room, specialized labs with relevant equipment, necessary infrastructure, state-of-the-art classrooms, and collaboration areas.

The Wenatchee Valley College building will oﬀer modular adaptable labs and learning spaces that allow for hands-on, interdisciplinary, and project-based learning. Eric Lester, the project’s manager, says construction should begin in the spring of 2023.

In December, Mortenson was selected for a 70,000-sf advanced manufacturing facility at Clark College in Ridgeﬁeld, Wash., that will focus on clean energy, applied science, and advanced technology, and will oﬀer group infrastructure/ manufacturing training for student collaborations.

In Oregon, Lattanner thinks the PCC training center’s potential trainees are likely to include high school grads, incumbent workers, and people looking to switch careers. “We’re not just looking for one type of student,” he says.

Lattanner and Sutton add that the training center is the ﬁrst of what could be several buildings on this campus, whose purposes, says Sutton, will be determined by the community and businesses they would serve.