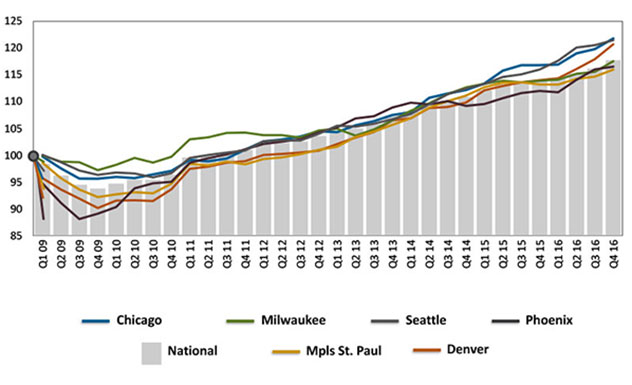 After strong growth of 4.3% in 2016, Chicago non-residential construction costs are poised to climb another 4% in 2017, according to the Mortenson Construction Cost Index. This expected jump puts Chicago near the top of the six major markets that Mortenson measures, with only Seattle likely to edge the Windy City with a 4% to 4.5% estimated increase this year.

‘We’re expecting a strong construction year in Chicago in 2017, although price increases may moderate a bit from 2016,” said Dennis McGreal, chief estimator for Mortenson in Chicago.

Rising material costs and overall market activity are spurring the price increases. In the fourth quarter of 2016, costs escalated by 2.3% or more for six building component categories included plumbing systems, electrical systems and aluminum entrances, compared to the third quarter. Another six categories, including steel doors and frames and deck formwork, rose more than 1% in the same period. Manufacturers also are struggling to keep up with demand for curtainwall and glazing materials as well as some specialty equipment, such as large emergency generators and elevators, McGreal noted.

In contrast, construction employment growth in Chicago has been slowing after reaching a peak in late 2014. Recently, it has been been relatively flat, a trend that should continue through the balance of the year.

In 2016, some notable construction projects included:

Major Chicago projects this year include:

At the same time, some construction sectors, notably hospitality and multi-family residential, are slowing down as the market reaches saturation.