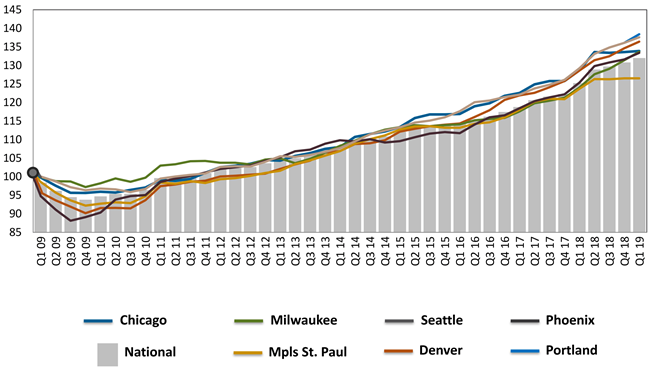 Mortenson Construction has released its quarterly Construction Cost Index report for Seattle along with six other metropolitan areas in the U.S.  According to the report, which details non-residential construction market trends in the first quarter of 2019, Seattle construction employment remains vibrant, while the cost of building components and materials has continued to rise moderately.

Year-over-year construction employment growth has remained consistently strong, hovering between 5-6% each quarter over the past 24 months. Construction employment and wage growth are key indicators of future activity trends, and also reflect market demands as well as the shortage of skilled craft workers.

Once again, Seattle’s cost index steadily outpaced the national average – a trend the city has sustained for some time. Construction costs for non-residential construction labor, material and equipment in Seattle grew 1.1 percent in the first quarter of 2019, as compared to the previous quarter.

As a result, Mortenson recommends building owners plan on a cost growth of 4.5 - 5.5 percent over the next 12 months.

“It’s important to keep in mind that year-over-year data can sometimes exaggerate the significance of a slight decline or increase, particularly because the strength of the prior year can impact the current year’s figures,” said Mark Wagner, chief estimator at Mortenson Construction in Seattle. “While these numbers have ebbed and flowed, the one constant is strong employment growth each quarter. With a nation-leading number of tower cranes dotting the Seattle skyline, and a bevy of major projects in the development pipeline, it’s no surprise that materials costs and construction employment are on the rise.”

Building materials and components in Seattle experiencing the highest cost increases in the first quarter of 2019 (as compared to Q4 2018) included installation of reinforcing steel, structural steel/metal decking, roofing systems, suspended acoustical ceilings, deck formwork, and site concrete. Categories that experienced moderate growth were plumbing systems, cast-in-place concrete, earthwork, asphalt paving, site utilities, and electrical systems. All other categories remained flat, with the exception of the decline in reinforcing steel material, likely due to the anticipated impact of trade tariffs not being as costly as expected.

Our Seattle market continues to be driven by the tech sectors and companies like Microsoft, Google and Amazon, as well as being heavily influenced by some mega projects that have recently – or are soon to be – underway, including the Seattle Center Arena, Washington State Convention Center, two large projects at SeaTac International Airport, Sound Transit infrastructure, and a significant amount of private development in the Seattle area. Although currently flat, the higher education and healthcare markets in the Puget Sound area are poised for major recovery in the next year.

Mortenson tracks and reports on seven metropolitan areas in the U.S. including Minneapolis, Milwaukee, Chicago, Denver, Phoenix, Portland and Seattle. The Mortenson Construction Cost Index is calculated quarterly by pricing representative non-residential construction projects in various metropolitan areas. It is part of a portfolio of industry insights and market studies provided by Mortenson. The Construction Cost Index is available for download at http://www.mortenson.com/cost-index.