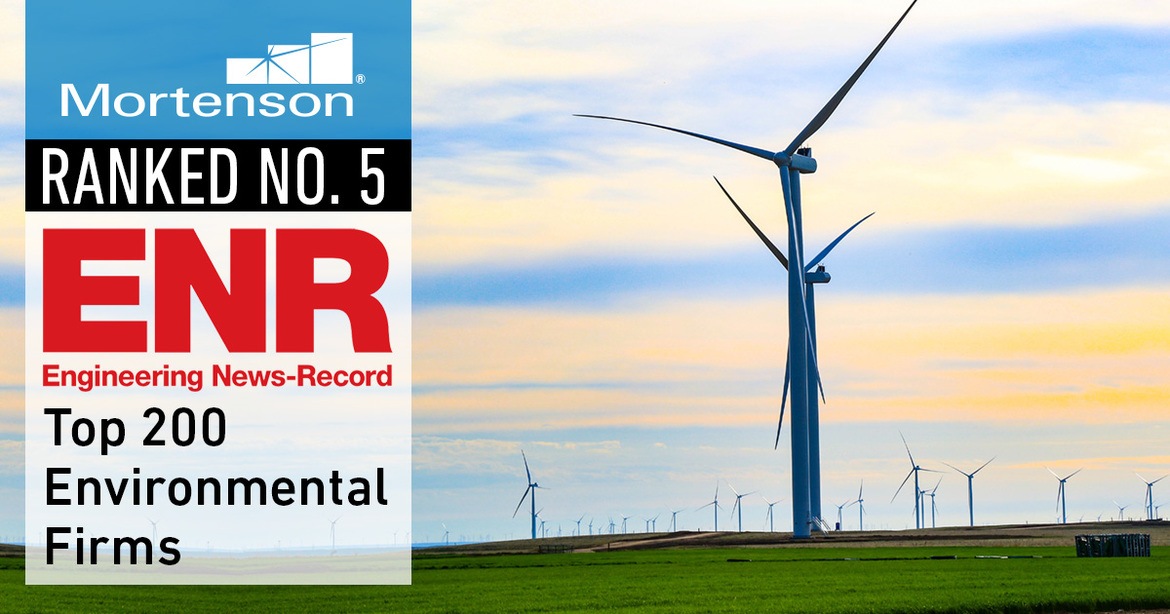 With a strong 2019 in its signature renewable energy construction niche that continues despite the pandemic, Mortenson (No. 5) joins the 2020 Top 200 as 17 new onshore wind power farms and six repowering projects are underway, says Tim Maag, vice president and general manager of the contractor’s wind energy group.

Since its first order 25 years ago to erect a single turbine in Iowa, the firm has built about 192 wind projects totaling more than 27,000 MW. “It grew into an incredible business for us,” he says. “We see a strong future.”

Among its numerous U.S. projects, Mortenson is building Xcel Energy’s $740-million Cheyenne Ridge windfarm in Colorado, a 500-MW project on about 100,000 acres that is one of its largest in renewable energy. Also in that state, the 600-MW Rush Creek wind farm went online last year, the largest completed project for Xcel and for the contractor.

Mortenson also will incorporate renewable energy supply into its just-won project to build an $800-million, 907,000-sq-ft data center for Facebook in DeKalb, Ill.

“In 2018 we were erecting 2-MW turbines, now we are building 4-MW, 5-MW and larger platforms,” he says. Looming expiration in 2020 of the credit also is fueling the construction push. Congressional Democrats in June introduced legislation that would extend the credit by five years.

Larger turbines are driving down the cost of power and making it a good alternative to fossil fuel, Maag says: “Wind is very affordable.” Large turbines also make it possible to generate affordable power in less windy areas, and he anticipates new business in the Southeast where wind is low.

Maag also credits the search for alternative energy sources by utilities in the South such as Duke Energy, Southern Co. and NextEra as driving future business. “The public is asking for alternative fuel sources that are carbon free,” he says. While transmitting power from remote high wind areas to areas of high demand for electricity is a concern, utilities will continue to commit capital to expand the transmission grid, says Maag.

Energy storage will solve the intermittence problem on transmission lines and will allow wind to replace fossil generation, he says.

Mortenson has not yet moved into the budding U.S. offshore wind business but continues to keep a close eye on its development in seeking to expand the renewable energy construction niche that also includes solar power projects, Maag says.

For now, the focus remains on the changing onshore business as turbines grow in size. “We work with all Tier 1 turbine suppliers to figure out the logistics of erecting large turbines. We are pushing the limit of what can be done with cranes,” he says. The industry will figure it out, Magg adds. “Now young engineers want to work with wind and solar to get involved with carbon free energy.”