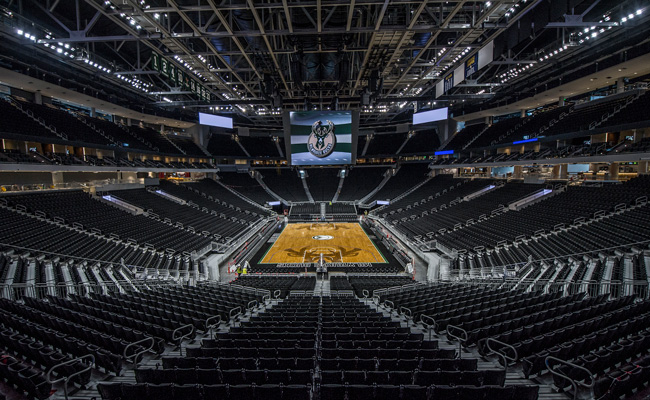 Fiserv Forum, Milwaukee’s much anticipated sports and entertainment venue, officially opened its doors to the public following a ribbon-cutting ceremony held today on the plaza outside of the downtown arena.

Former Bucks owner Senator Herb Kohl also attended the ribbon-cutting ceremony and was honored by the Bucks for his 29-year stewardship of the team with the naming of Herb Kohl Way for the block in front of Fiserv Forum. The ribbon-cutting was held next to a world record-breaking welcome mat greeting fans with the event’s “Welcome Home” theme. The 92-feet long by 24-feet wide mat was verified by a Guinness World Records judge as the largest vinyl floor mat.

After the ceremony, more than 50,000 people were expected to tour Fiserv Forum during the Open House, giving the community its first look inside the arena.

The world-class Fiserv Forum is the new home of the Milwaukee Bucks and Marquette men’s basketball team. It will also host a variety of programming – 24 events have already been announced for the venue’s first year – including major concerts, family shows and other sports and entertainment events. Global superstar rock band The Killers will perform the Grand Opening concert at Fiserv Forum with Milwaukee natives Violent Femmes on Sept. 4.

Fiserv Forum will seat 17,500 for basketball and up to 18,000 for concerts with incomparable sightlines from all vantage points. The arena has three clubs including the BMO Club, Mezzanine Club and Panorama Club, which is on the highest level of the building and features an outdoor terrace with sweeping views of Milwaukee’s skyline. Premium seating in Fiserv Forum includes 34 private suites, West Bend Lofts and more than 800 club seats.

Fiserv Forum offers state-of-the-art technology, with more than 300 distributed antenna systems and 16 wireless access zones to allow for high-speed connectivity throughout the arena. Daktronics outfitted the arena with over 12,000 square feet of video displays, including the centerhung scoreboard, which is more than 3,900 square-feet, making it the largest equilateral centerhung display in the NBA. Fiserv Forum also contains more than 800 high-definition flat screen televisions.

As a cultural center for the city, Fiserv Forum houses the Milwaukee Bucks Art Collection, which includes 79 original pieces and 43 photographs, created by 32 artists, 22 of whom have Wisconsin ties. The Bucks collaborated with Sports & The Arts to secure an eclectic mix of artists and mediums.

A groundbreaking ceremony for the new arena was held on June 18, 2016, with substantial completion of the building having occurred on July 31, 2018. Over 3,800 craft workers spent two million total work hours building Fiserv Forum, with 76 percent of the contracts to build the venue completed with Wisconsin companies.

Fiserv Forum was designed by world-renowned Populous, and Wisconsin-based Eppstein Uhen Architects and HNTB. The owner’s representative for the project was CAA ICON, and the construction manager was Mortenson. M-E Engineers was the mechanical engineer and the structural engineers were HNTB and Walter P. Moore.