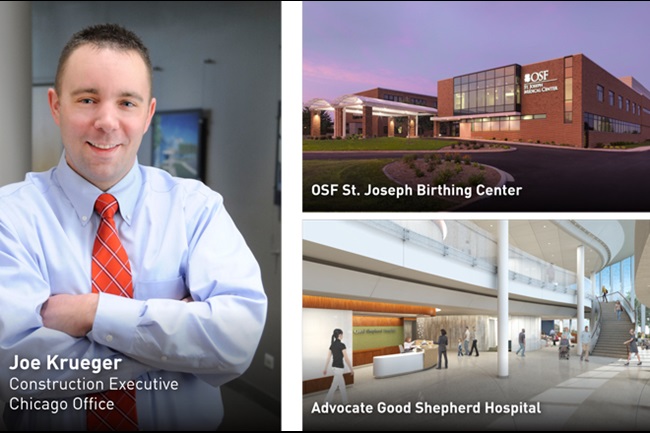 Mortenson Construction, a leading builder of healthcare, higher education, and cultural facilities in the U.S., is pleased to announce the promotion of Joe Krueger, construction executive in Mortenson’s Chicago office. Throughout his career with Mortenson, Joe has been a member of and led some of our largest and most complex projects.

Joe started his career with Mortenson in 2005. He was the leader of the highly successful Saint Joseph’s Regional Medical Center project in Mishawaka, IN. Following the completion of the project, Joe relocated to Bloomington, IL and successfully completed the OSF Saint Joseph’s Birthing Center project.  Joe formed and fostered a successful relationship with OSF and due to his team’s success, Mortenson was awarded the next project at OSF.

In 2011, Joe once again relocated for the company and took on a challenging confidential data center project in West Des Moines, IA.  Upon completion, Joe returned to Chicago where he currently leads Mortenson’s team on the complex $160 million Advocate Good Shepherd Hospital Modernization project.

Joe’s collaborative and resilient leadership style have led to his success and that of several of Mortenson's projects.  Most recently, Joe was a key member of the team that led to Mortenson’s selection for the new $280 million dollar MercyRockford Hospital project in Rockford, IL.  Joe will be the on-site leader of this exciting new project.