Take a peek at a recent drone flight over the new stadium. Throughout the project, drone technology helped build excitement for Loon fans and simplified many tasks in the field resulting in time savings.

Minnesota United FC used the footage at every home game at TCF Bank Stadium. Fans were treated to a short clip of the current construction progress to build excitement and momentum for the new stadium. It was also featured in Minnesota United FC promotional videos. Check out “Behind the Loon Extras: Allianz Field Opener” posted a few weeks ago.

"The drone footage that we receive from Mortenson has been invaluable throughout the construction of Allianz Field,” said Daniel Claxton, Director of Production & Match Day Presentation for the MNUFC. “Having access to a "bird's eye view" of our site coming together from week to week helps keep our fans engaged and excited throughout the construction process. Watching the continual progress from these different perspectives gives you the sense of being on-site, which is the ultimate goal as we produce our videos."

Drone images were used on site logistics plans, highlighting gate locations, material drop-off routes, and equipment locations. This information was shared through a cloud-based project management system which could be accessed anywhere from any computer or mobile device. It kept the entire team informed in real-time and assisted with many simple tasks. For example, trade partners didn’t need to call the superintendent to ask where trucks should enter the site or where material needed to be dropped off.

Superintendent Taylor Gunkel commented, “The true power of drones was the capability to utilize up-to-date aerial photos to communicate with 50+ foreman at one time. The ability to relay upcoming work and highlight its impact on the current site was invaluable."

"Drones added huge value in managing the 5 cranes and 15 lifts on site, as well as in the management of the schedule,” said Project Executive Greg Huber. “Images were also used to communicate with neighbors and adjacent businesses, helping minimizing interruptions to their business operations.

Logistically, the team benefitted from current aerial views to pull accurate dimensions, calculate material volumes, manage on-site equipment and determine material laydown areas. When the power company needed to add a power box and run lines for the permanent power feed, the team was able to quickly verify locations to ensure they had a clear path. "Without drone images this task would have taken over two hours, as team members would need to physically walk the site", said Andrew Gibson, Senior Integrated Construction Coordinator. "With drone aerials, the task was reduced to just 5 to 10 minutes." Similar time savings due to drone images were applied to hundreds of other tasks at Allianz Field.

Drone images eliminated safety risks associated with quality inspections. On the roof canopy and high beam connections, the team conducted inspections from the convenience of a computer screen (versus climbing-up the steeply slanted roof). Design files were also overlaid onto drone images to help verify site work (as shown below). "I could quickly and easily confirm what site work was completed and plan the remaining work," said Gibson. "For instance, with a current drone scan I was able to plan the site sidewalk concrete pour, as the images illustrated equipment that needed to be relocated and what preceding tasks needed to be completed prior to the pour." 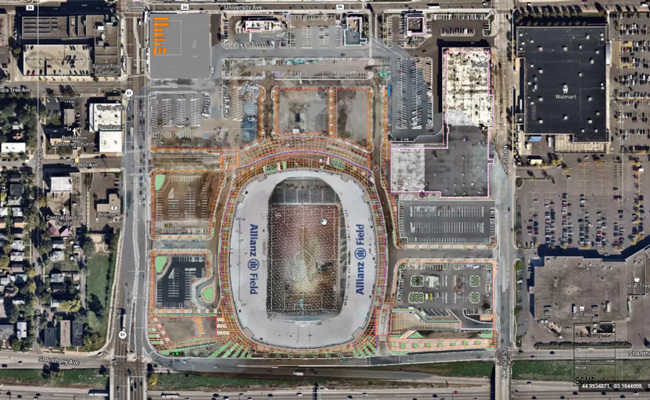 Want to learn more about the benefits of drone use at Allianz Field?

Andrew Gibson, Senior Integrated Construction Coordinator at Mortenson and licensed drone pilot and Applications Engineer, John McMannon of ATG recently presented at the Autodesk University national conference in Las Vegas on the use of drones at Allianz Field. Click here to watch their presentation and learn more about the process. 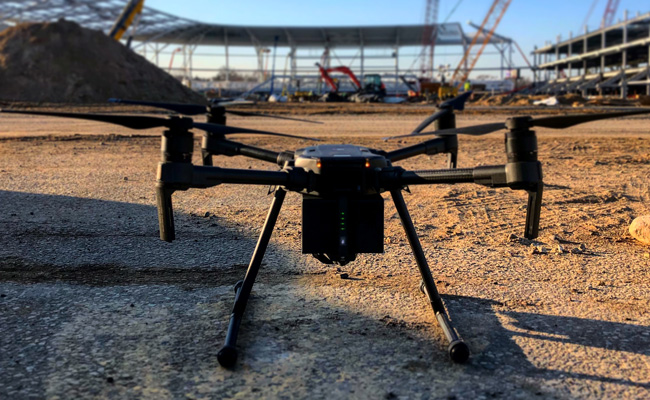