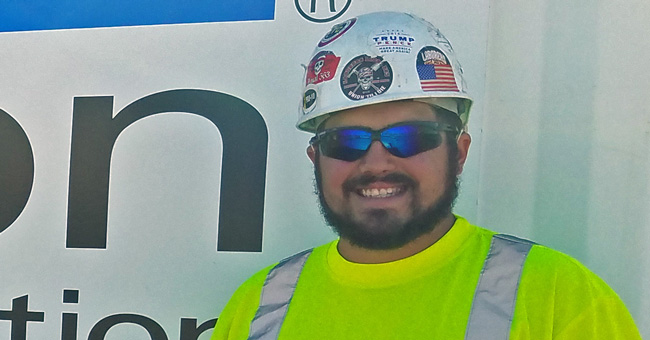 In February 2015, Tanner Anderson was working the drive-thru window at Bell State Bank, near the new Sanford Medical Center project in Fargo. He could see the construction process unfold from his window and his interest in the project was peaked. As Mortenson craft workers came through his window to cash their paychecks Tanner would start-up conversations with them about their work. He made connections and soon became engaged in the Mortenson hiring process.

Tanner joined the union as an Apprentice Laborer in March of 2015. The path to become a Journeyman Laborer is approximately 2-1/2 years. Tanner will achieve this level on July 21, 2017. His grandfather, Ron Anderson was a career 49’er union equipment operator, so you could say that Tanner’s interest in construction began many years ago.

“I appreciate the pace of the project change. I have had the opportunity to work on a variety of project types with many different team members,” said Tanner. “Every superintendent has treated me with the utmost respect and taken the time to work with me and answer my questions.”

Currently, Tanner’s focus is on formwork and concrete, disbursement of materials and equipment, Infection Control Risk Assessment (ICRA), and demolition. “Every day brings a new task and new challenge which helps me build-up my expertise,” said Tanner. In his free time, he enjoys deer and pheasant hunting and spending time with his wife Moriah and daughter Rylee.