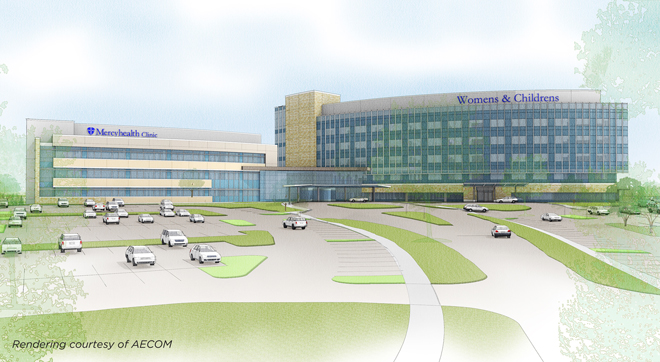 Chicago – (June 9, 2016) – Mortenson Construction has been chosen as the builder for Mercyhealth’s new specialty women’s and children’s hospital and multispecialty clinic building. The $485 million project broke ground on June 6, with both facilities scheduled for substantial completion in January, 2019.

Mortenson’s Chicago office, which recently built the new 296-bed Silver Cross Hospital in New Lenox, Ill. and led the joint venture partnership to build the Ann and Robert H. Lurie Children’s Hospital of Chicago, will be the construction manager, working closely with architect and engineer AECOM. Nationally, Mortenson has completed $4.9 billion in healthcare work, representing nearly 400 facilities and 17.5 million square feet, in the past 10 years.

"Mortenson Construction’s extensive experience in building state-of-the-art healthcare facilities made it the clear choice for Mercyhealth,” says Joanna Benning, Vice President of Facilities and Construction. ”Time and again, this team has delivered the highest quality, safely, on time and on budget.”

Mortenson simultaneously will build the seven-story, 451,000 square foot hospital and the five-story, 81,500 square foot clinic near the intersection of Illinois Interstate 90 and East Riverside Boulevard in Rockford, which is Illinois’ third-largest city. The new hospital will focus on specialty women’s and children’s medical services, intensive care for all ages, cardiac center and the area’s only Level 1 Trauma Center. The multispecialty clinic will house labs, physical therapy and other outpatient services as well as administrative offices.

“Mercyhealth is making a major investment to expand important health services for its community, so people can receive more world-class care close to home instead of having to travel to Madison or Chicago,” says Larry Arndt, Mortenson’s healthcare general manager who is leading the project. “To make these services available as soon as possible, Mercyhealth has set an ambitious building schedule, so we will be employing a range of innovative and LEAN construction technologies and techniques, including prefabrication and modular construction.”