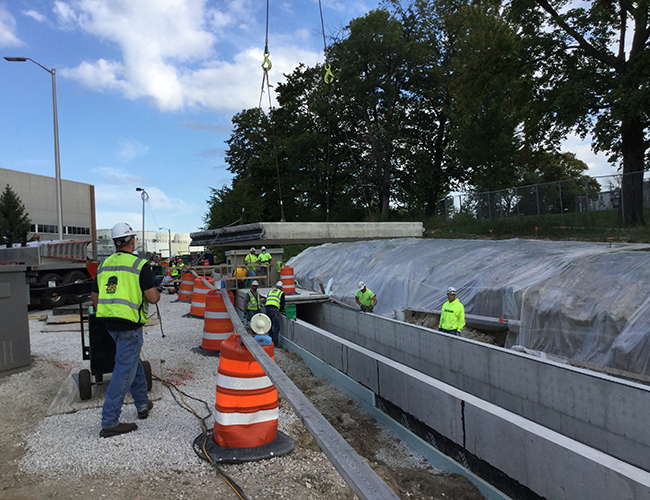 Mortenson successfully finished the construction of the Milwaukee Regional Medical Center (MRMC) tunnel. The tunnel brings high- and low-pressure steam to Froedtert Hospital, Children’s Hospital of Wisconsin, Medical College of Wisconsin, Versiti, Curative Care, and the Milwaukee County DHHS Behavioral Health Division. Mortenson replaced the existing tunnel with one that is 230’ long and 6’ wide by 6’-6” tall, with 9” thick walls and a lid. The tunnel is completely walkable and waterproof, was built in just over four months, and is designed to last 50 years.

On the project, Mortenson self-performed the precast concrete panels for the first time on a Wisconsin project. The tunnel’s concrete includes a xypex additive, stainless and epoxy reinforcement, and exterior waterproofing for a water-resistant tunnel. The team used new Peri formwork for cast in place wall sections. In total, the team installed 21 precast lids that were 10’ x 7’-6” x 9”. The Mortenson team cast each of the panels on site in groups of four at a time. All 20 panels were then set in eight hours utilizing a 75-ton crane and our self-perform concrete team.

Mortenson worked with trade partners Veit and Martin Petersen to demo the existing tunnel and steam pipe by working around existing underground and exposed power/telecom utilities on the site. This was accomplished with zero service disruptions. The team was able to get the new steam tunnel operational 10 days early.