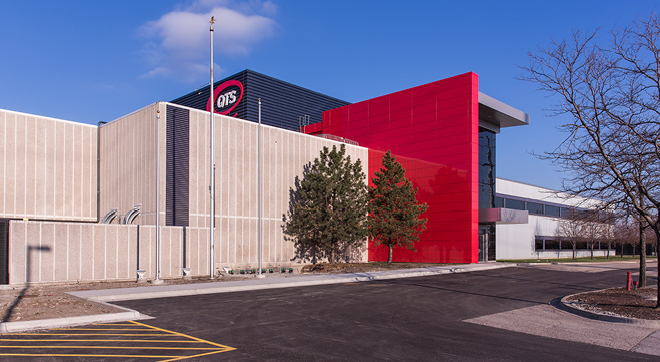 “QTS’ world-class facility is just what the Chicago market needs. There is pent-up demand for data center capacity, especially so close to downtown, as every company from startups to global leaders are increasingly moving to digital businesses built on collecting, crunching and analyzing enormous amounts of data to create products and services,” says Andy Stapleton, the Mortenson construction executive who led the renovation.

Along with consulting engineer ESD Global and lead architect Corgan Associates, Mortenson and QTS creatively repurposed parts of the building when possible while constructing a highly efficient and convenient layout for data center clients. Mortenson reconfigured the loading area by adding bigger doors to some of the old loading docks where newspapers were placed into delivery trucks, making them the entry point for the secured receiving area with 10-foot clearances for servers and other data center gear. The massive reinforced floors that run down the center of the building and supported printing presses are being reused to hold heavy electrical equipment that will power clients’ servers.

In addition, Mortenson constructed new office space and shared “touchdown” rooms near the data hall so clients can work close to their computer operations when necessary instead of going back to their offices. Other amenities include first- and second-floor breakrooms, with plans for an onsite gym.

“Mortenson’s expertise in data center construction, the Chicago market and adaptive reuse is second to none, and these strengths came together beautifully in our Chicago data center,” says Nabon Marsico, QTS Chicago site director. “Just like QTS, Mortenson’s commitment to quality, safety, collaboration and client service has made this project a true team effort that has produced an exceptional facility.”

QTS is hosting an open house on July 15 from 2 to 6 pm at the Chicago data center, 2800 S. Ashland Ave. QTS and Mortenson executives will be available to meet with reporters and other guests.