In today’s competitive job market, internships are a great way for young professionals to develop the skills necessary to be successful in an industry that is exciting, rewarding, and full of opportunity.

Recognized as one of Arizona’s Most Admired Companies by AZ Business Magazine and BestCompaniesAZ in 2018, these accolades bolster Mortenson’s commitment to valuing and supporting its team members. However, we are never settled. The foundation to our success is our people. Our growing team of more than 5,000 nationally, and nearly 200 in Phoenix, firmly believes in developing the next generation by educating and mentoring the future leaders of this industry. We seek out the very best candidates for a variety of internships based on their professional interests.

This past summer, we welcomed more than 10 interns to our team, including students from Colorado State University, the University of Central Missouri and Arizona State University. In an effort to improve and provide the best possible experience, we asked our interns to share their experiences with us at the end of the summer. Some of the interesting and humbling feedback included:

Why did you choose Mortenson for your internship?

“My first impression of Mortenson was their culture,” said Kindell Davis, who returned to Mortenson for his second internship on the Salt River Project (SRP), Project Administration Building. “There’s definitely a difference. Mortenson doesn’t really have a corporate feel to it. It’s more of a family environment.”

Other interns seemed to agree, including Bryan Neville, a graduate from Arizona State University, who interned in Phoenix on the Facebook Eagle Mountain Data Center, which is located in Utah. Bryan said one of the best things about his internship with Mortenson was the people. “I didn’t feel afraid to talk to anyone in the office,” he explained. “Everyone was open and willing to talk to me.” Bryan has since moved to Utah to join our team as a field engineer.

Uniquely, another intern, Estrella Saldana, recently graduated from a local high school. She connected with Mortenson through her involvement in the ACE Mentorship program. Estrella compared her past experiences working at another company to interning at Mortenson: “At Mortenson, I don’t feel like an intern. I feel like I’m actually part of the team.”

Nelly Corona was another repeat intern this summer, spending her second Mortenson internship at the University of Arizona’s Indoor Sports Center in Tucson, Arizona. Nelly explained, “Mortenson’s team bond is very strong. Everyone treats each other with respect, and it’s such a friendly environment to be a part of.” 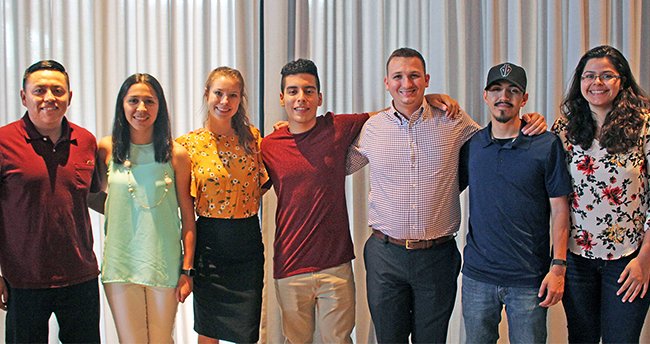 Mortenson interns pose for a photo at their end-of-summer event.

What sets Mortenson apart from other companies in the industry?

Alex Solis-Reyes says that for him, the difference was clear. 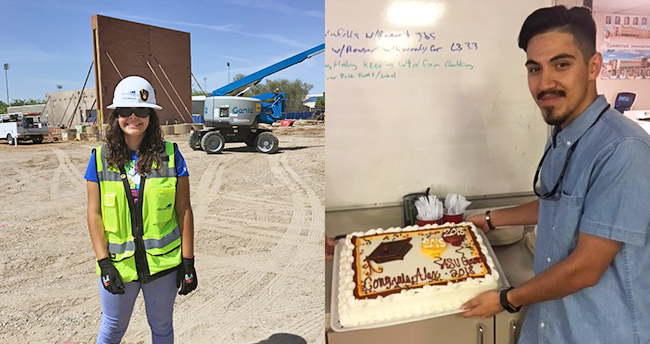 Since his internship on the SRP Project Administration Building project, Alex has been hired on as a full-time employee at Mortenson and is currently working as a field engineer.

Do you have any advice for future interns?

Chris Ayala, who also interned at the SRP project, says his advice to interns is to “Be honest with your mentors. Be honest with your co-workers. Sometimes interns may keep their opinions to themselves because they’re afraid of saying the wrong thing. What I learned is when you have something to say, Mortenson really does want you to speak up. It’s all a product of who ‘you are,’ and how you grow within the company.” 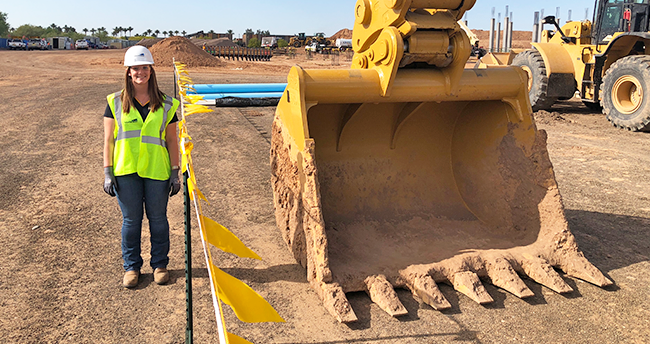 Mortenson’s robust college recruitment program seeks out the very best candidates, and provides a variety of internships based on their professional interests. We look for talented individuals with the drive for innovation, who understand the value of teamwork and have a passion for the construction industry. Each of our interns are paired with a mentor who provides real-world experiences in construction, engineering or corporate roles.

To learn more about internships visit the Mortenson Careers page.