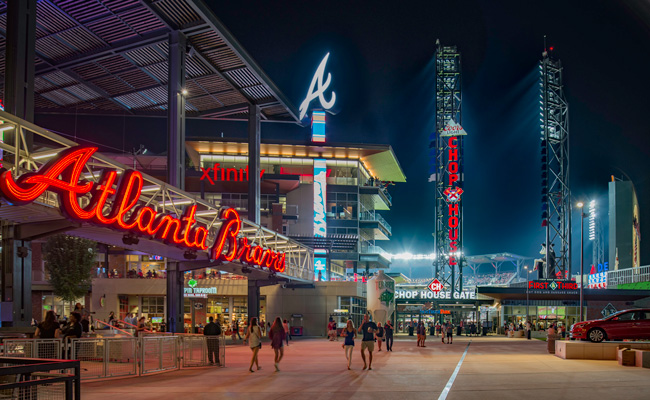 The Atlanta Braves opened the new $500-million SunTrust Park on March 31, defeating the New York Yankees in an exhibition game. The event was not only a win for the team and its fans, it was a victory for the design, construction and development partners who delivered the construction project under one of the fastest schedules in the history of major league sports.

“To be there on the opening day and experience the joy of people having fun in a facility that you poured your heart into, you forget all of the difficult things that happened,” says Chris Britton, project director with American Builders 2017. “All of those challenges and sacrifices go away with that opening pitch.”

American Builders 2017—a joint venture between Brasfield & Gorrie, Mortenson Construction, Barton Malow Co. and New South Construction Co.— completed the ballpark in 29 months, just in time for the start of the 2017 season. The construction team and its subcontractors logged more than 5.6 million work hours on the project.

Keeping the project on track proved to be a daunting task right from the start as the team encountered site conditions that jeopardized the schedule. The team began with limited information about the 57-acre greenfield site, located at the crossing of Interstates 75 and 285 in Cobb County. Three natural gas pipelines running through the main portion of the ballpark site had to be relocated. Deep rock near home plate required blasting approximately 50 ft into the rocky areas.

Crews also encountered soft soils in the outfield, which required up to 60 days of surcharging before work could continue.

The project was initially sequenced to start at home plate and progress into the outfield. To overcome site issues, the project was resequenced to start in the outfield while the pipeline relocation and blasting continued near home plate. Teams worked in both directions around the ballpark, meeting at home plate. Ultimately, teams worked in several areas simultaneously to make up time on the schedule. At peak, 14 cranes were active on the site.

“There were many site logistics and site challenges that had to be addressed along the way,” says Mike Plant, president of development for the Atlanta Braves. “Despite encountering these challenges during construction, American Builders 2017 managed to keep the project on schedule, meeting or beating every turnover milestone date for occupancy.”

Due to the fast-track schedule, construction began while some designs were still in the schematic phase. Key subcontractors were brought on in a design-assist role to work with the design team, led by Populous, to maintain quality while protecting the budget. One of the most innovative parts of the project, the sports lighting system, resulted from the project team’s collaboration with GE in the development of its first full LED system in a major league ballpark.

The JV didn’t reach a final GMP until nine months after groundbreaking.

Working with the design team, American Builders 2017 recommended a hybrid structure of concrete and steel for the 41,500-seat stadium, featuring concrete concourses with structural steel for the raker beams and canopy structure. A main goal of the structure’s design was speed of delivery. The 37 steel raker trusses for  the terrace level were prefabricated in Texas. More than 78 ft long, the rakers were shipped to the site in single pieces and picked from trucks for placement.

The ballpark’s design incorporates brick and stone, crowned by a steel structure that supports the largest shade canopy in Major League Baseball.

The ballpark acts as the anchor of The Battery Atlanta, a 60-acre mixed-use community. The ballpark was designed concurrently with the Battery to help seamlessly meld it into a unified development. The ballpark is conceived as “the living room for the entire community,” according to Populous. Surrounding retail, residential and office spaces have views into the ballpark.

Bradd Crowley, project manager at Populous, says the strategy offered a unique opportunity to integrate with other designers. “If you’re sitting in the ballpark and looking out toward left field, it’s hard to tell where our project stopped and the other development begins,” he says. “The styles blend very well. It all came together at one time.”