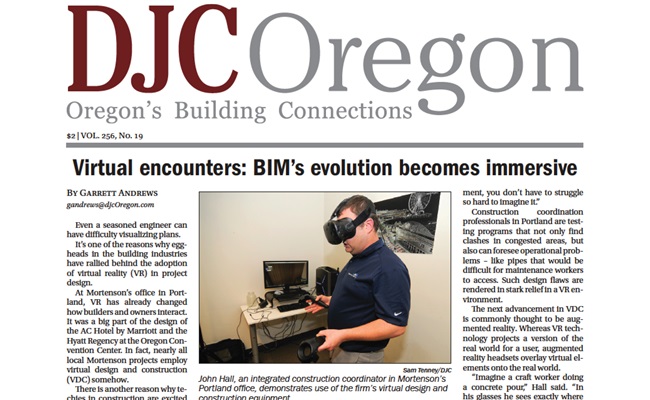 Our Mortenson Portland office Virtual Design team met with the DJC's Garret Andrews to discuss the future of Virtual Reality in the construction industry.

Even a seasoned engineer can have difficulty visualizing plans. It’s one of the reasons why eggheads in the building industries have rallied behind the adoption of virtual reality (VR) in project design. At Mortenson’s office in Portland, VR has already changed how builders and owners interact. It was a big part of the design of the AC Hotel by Marriott and the Hyatt Regency at the Oregon Convention Center. In fact, nearly all local Mortenson projects employ virtual design and construction (VDC) somehow. There is another reason why techies in construction are excited for VR.

“There’s the cool factor for sure,” said John Hall, an integrated construction coordinator for Mortenson. The firm’s Portland office (which began as an offshoot of the Seattle office) recently purchased several HTC Vive headsets and navigational tools to improve visualization.

“People around the office are always peeking on what we’re doing,” said Dan Mehls, vice president and general manager of Mortenson’s Portland office. Clients now get a better spatial sense of their buildings, according to Mortenson staffers. This has helped them make more decisions earlier on, which saves them money. One confidential Mortenson client reportedly spent nearly two hours with the VR goggles on, in his virtual building, calling out changes to gathered staffers.

For Mortenson, the technology has made it less reliant on physical mock-ups, which can run them around $60,000 to $80,000. Staying ahead of the curve regarding construction tech is big business for Minneapolis-based Mortenson. One of the country’s largest builders, it helped pioneer building information modeling (BIM) in the late 1990s, during construction of the Frank Gehry-designed Walt Disney Concert Hall in Los Angeles.

The major insight to emerge from that collaboration, according to Mortenson’s integrated construction staff, is how the team was able to tie 3-D renderings to a fourth dimension: time, or scheduling.

These days, all large builders utilize BIM somehow. Firms like Mortenson offer clients a full range of options, from minimal to fully immersive. New with this technology is the ability to “ambulate” – or walk around – the 3-D environment, according to Hall.

“It’s not just a scale model; you actually get to experience the space,” he said.

Construction companies today have an array of off-the-shelf virtual reality programs at their disposal. Mortenson says its edge is in the details. It can provide a customer a bespoke virtual environment in as little as two weeks, and with customizable elements down to the wallpaper.

“You can really present to your customer what you’re going to build,” said Anartis McKerral, an integrated construction coordinator at Mortenson. “Especially with 2-D plans, you spend a lot of time in your head trying to figure out what something is going to look like – you try to picture how far away is that ceiling, or that reception desk or hospital bed? But when you get in a VR environment, you don’t have to struggle so hard to imagine it.”

Construction coordination professionals in Portland are testing programs that not only find clashes in congested areas, but also can foresee operational problems – like pipes that would be difficult for maintenance workers to access. Such design flaws are rendered in stark relief in a VR environment.

“Imagine a craft worker doing a concrete pour,” Hall said. “In his glasses he sees exactly where the rebar is supposed to go, in the hole in the dirt.”

Hall and McKerral say Occupational Safety and Health Administration-approved safety helmets equipped with augmented reality are in development. For now, the major advantage of virtual reality is its empowerment of the developer in the design phase. Though there’s occasional pushback from older, veteran builders, buy-in on this new technology is high, according to Mehls. One corporate job, in Pennsylvania, we saved $500,000 in changes detected early through use of virtual reality, according to the company. For younger people, the move toward fuller integration is a more natural one. This is hugely helpful for an industry struggling to attract the next generation of builders, Mehls said.