to main content
Newsroom
NewsInsightsPodcastsVideosMedia Contact
Article
What’s Below the Ice? An In-depth Look at Building a Competition Ice Rink 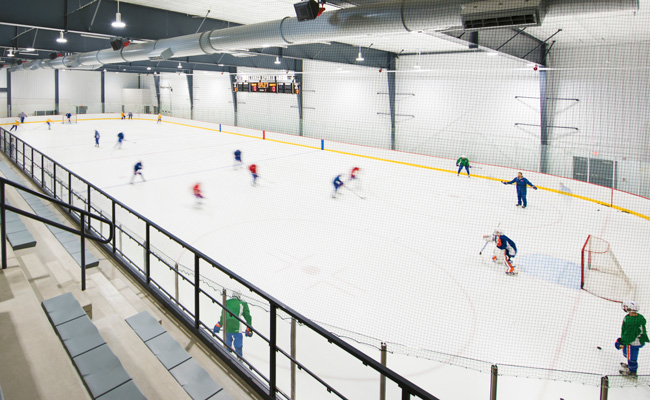 The West Fargo Sports Arena opened for competitive games with great fan fair in November. Getting to this exciting moment took 11 months of construction and included many complex steps, from assembling the mechanical pieces that regulate the temperature, pouring concrete slabs, and finally adding the ice.

To start, the team spent 25 days constructing each ice rink slab. The first layer is made-up of 2 miles of heating piping, which controls potential frost permeating below the building foundation. Next came 500 tons of sand making up the rink base. On top of the sand is 1,060 sheets of insulation and 14 tons of rebar for reinforcement. Finally, cooling coils were installed to regulate the temperature of the ice rink and constituted roughly ten miles of refrigeration piping.

After the mechanical pieces were assembled the team began the process of pouring 300 cubic yards of concrete. The final floor flatness of the rink is critical to the functionality of the ice, as even the slightest discrepancy can negatively impact the ability to create a uniform ice sheet. Each rink concrete pour required a crew of 25 craft workers, took 15 hours to pour, and 21 days to cure.

The final step in the process was to add water on top of the concrete to form the ice. This was done by misting layers of water, utilizing a specially designed supply hose. After the first layer was applied the ice surface was painted with official rink lines prior to the final ice layer being installed. It takes roughly 10,000 gallons of water per inch of ice. With a final ice thickness of 1-1/4 inches, each rink at the West Fargo Hockey Arena required roughly 12,500 gallons of water.