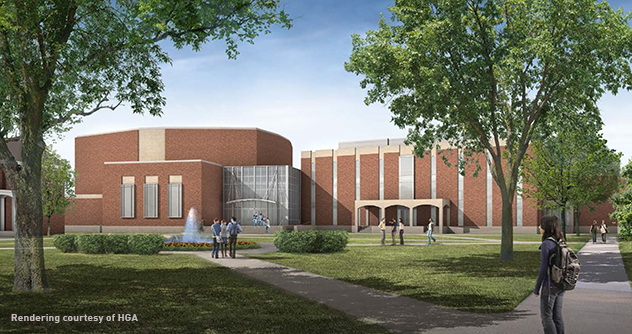 Mortenson Construction is launching a major building project on the Wheaton College campus to create a state-of-the art performing arts center. In the $18 million first phase of the project, Mortenson is rebuilding the three stories and basement of a gutted 50,000 square foot former science building into the new home for the school’s Conservatory of Music.

The new Armerding Center for Music and the Arts, set to open in the fall of 2017, will include recording studios; a two-story,110-seat Recital Hall with green room; digital keyboard lab; chamber rehearsal and performance spaces; classrooms; practice rooms; and faculty and administrative offices. The second phase calls for demolishing an adjacent building and constructing a Concert Hall, which will include performances for the public and is part of Wheaton College’s long-standing commitment to its music program, as well as to serving local, regional, and national audiences.

“Mortenson is a premier builder of acoustically sensitive spaces as well as a leader in higher education construction, and we are benefiting from the team’s clear expertise,” says Randy Norbeck, Wheaton College’s director of facility services and construction. “Mortenson has closely collaborated with FGM Architects, HGA, KJWW, Webster, McGrath & Ahlberg, Theatre Projects and acoustician Threshold Acoustics to ensure we optimize the design and budget to build a world-class facility for learning, instruction, research and performance.”

Acoustics and sound control are paramount in a conservatory of music, leading to special design and construction considerations and choices. To manage sound isolation from room to room, Mortenson will be installing double ceilings and double stud walls. They are also installing a chilled-beam heating and cooling system that provides low-noise humidity control. The system’s shorter profile also reduces the amount of ductwork, which is important since the double ceilings limit the space. For more acoustic separation, Mortenson will be building isolated flooring systems and installing acoustical wall treatments.

Conservatories require other considerations. Armerding’s hallways and one elevator will be extra-wide to accommodate moving pianos, for instance. Additionally, rooms are sized and shaped to accommodate small group practice and study, and wood lockers are designed to accommodate instrument storage to ease student class transitions.

Mortenson is using 3D computer modeling and laser scanning to streamline the process and ensure high quality. Using these virtual models to lay out the mechanical, electrical, plumbing, and fire protection systems prior to building them in the field allows the subcontractors to fully integrate with each other to ensure an acoustically sound system while achieving the highest ceiling heights allowable given the Armerding height constraints. Because every opening has the potential to impact acoustical excellence, Mortenson also is using the virtual models to coordinate electrical pathways to reduce the number of penetrations.

“Wheaton College has long been known for its music program but it has lacked a dedicated facility designed to meet the unique needs of its students and faculty. With the new Armerding Center for Music and the Arts, the school is consolidating the majority of its musical education and performances under one roof that will offer new opportunities for learning, collaboration, inspiration and achievement,“ said Carolyn Sizemore, project manager for Mortenson.

Mortenson is a top builder of cultural and performing arts centers for education and entertainment including the University of Iowa School of Music and Hancher Auditorium, MacPhail School of Music in Minneapolis and the Walt Disney Concert Hall. The company also is a national leader in the higher education market with $5.1 billion in projects since 1963. In Chicago, Mortenson’s other current higher education projects include new construction and/or renovations for the School of the Art Institute of Chicago, College of Lake County, Harper College and the University of Chicago.