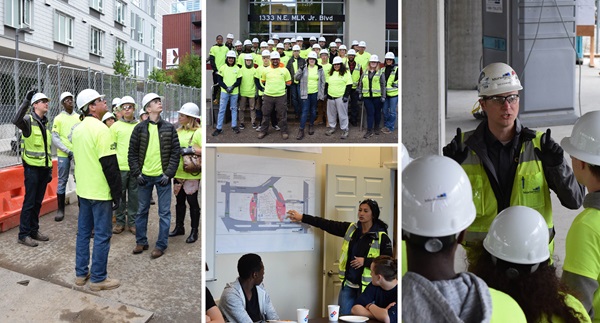 Gaming software and how it’s changing construction. Virtual design & VR. Education. Collaboration. Integration between trades. These were all topics of conversation last Thursday when students from Portland’s Benson Polytechnic High School were introduced to what it takes to make a huge construction project come to fruition.

A group of 25 Benson students with interests in construction, architecture and the trades were treated to an up-close-and-personal look inside one of Portland’s largest construction projects, the Hyatt Regency at the Oregon Convention Center. The project, slated for completion in Q4 of 2019, is a 440,000 square foot, 600 key, full-service hotel designated to provide accommodations for convention-goers from all over the world. The hotel is about 33% complete, and it’s the perfect time to introduce the students to the innerworkings of the construction process.

Mortenson’s Integrated Construction Coordinator Dom Daniels presented the students to the project virtually before allowing them to step foot on site, giving them context and appreciation for what work was to come. He ‘walked’ the students through areas of the building that were in progress and showed the scheduling process in 4D.

“Having the Benson High students visit our site was an awesome experience, not just for the students but for the construction team as well.” Dom said. “They were engaged and full of optimism. It was true pleasure to host a fun group like that, as these students will blossom into future leaders and innovators in our industry.”

On site, the students watched as the carpenter and labor foreman raised a 30 ft. x 10 ft. wall panel, and later dodged some wet concrete as the mason team erected a new wall in the hotel’s loading dock. They also peeked over the fence at the construction site of the future Oregon Convention Center Garage.

Construction Executive Mike Clifford, an advocate for community engagement on the project, said, “It was just really fun. The kids were engaged and asked so many good questions. I wish I had a similar opportunity when I was their age just to be able to get a glimpse into different career opportunities. Our industry needs bright and excited kids like the Benson students. We look forward to doing this again.” 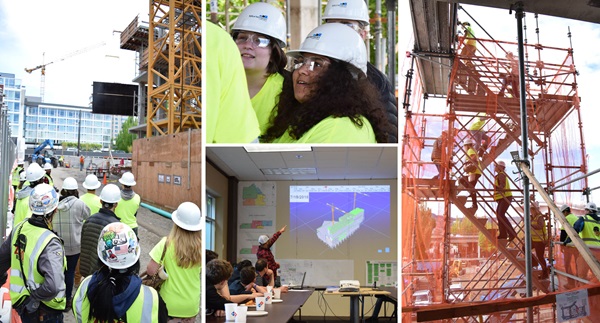