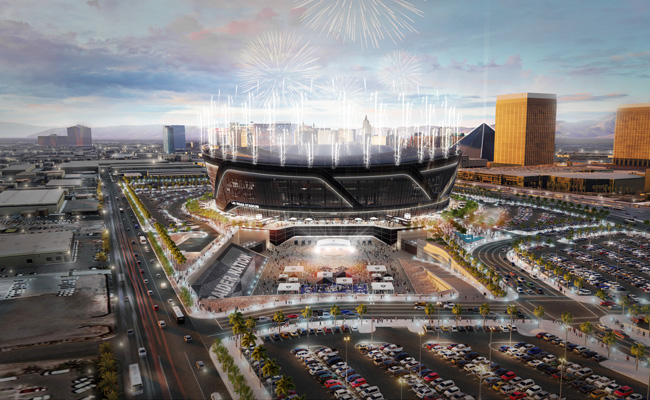 Mortenson and joint-venture partner McCarthy Building Companies, broke ground on the new $1.9 billion multi-purpose stadium near the famed Las Vegas Strip yesterday. The ceremonial groundbreaking signifies the start of construction which will be completed in time for the 2020 NFL season.

MANICA Architecture is behind the stadium’s sleek and modern design, which features a horseshoe-shaped seating arrangement with an open-air entrance highlighting spectacular views of the Las Vegas Strip. Other unique features include a ETFE cable net roof that will provide an outdoor-like experience without exposing fans to the intense heat of the desert sun; a retractable natural turf field; large operable walls; and all the amenities and premium clubs, lounges and suites you’d expect from a Las Vegas venue.

"This is an exciting day for Southern Nevada, thousands of local craftworkers and hundreds of local businesses,” said Paul Dudzinski, project director, Mortenson | McCarthy. “The economic impact of construction will benefit Clark County, the City of Las Vegas, and the State of Nevada for generations to come.”

Building the 1.7 million-square-foot facility will require an estimated 3.5 million work hours, 9,000 craftworkers from various trades, as well as hundreds of local subcontractors and suppliers. In addition, the Small Local Business Enterprise Requirement established by Senate Bill 1 (SB1) requires 15 percent of the project to be subcontracted to small local businesses. There is also a workforce goal that targets 38% of construction work hours to be performed by minority and female workers.

"It’s an honor to work with the Raiders Franchise and we are excited to bring their vision to life in the entertainment capital of the world,” said John Wood, principal-in-charge, Mortenson | McCarthy. “This venue will be an international attraction that the community will be very proud of.”