The sounds of violins and voices replaced hammers and drills on October 19 when classes began at Wheaton College’s new Armerding Center for Music and the Arts. Mortenson Construction completed the year-long, $18 million transformation of the former science building in early October, with the college moving in over fall break to the new home for the school’s Conservatory of Music.

“The requirements for constructing a performing arts space go far beyond the average building, especially the need to minimize sound transfer between rooms and throughout the heating, cooling, electrical, and plumbing systems as well as the aesthetics of the facility,” said Randy Norbeck, Wheaton College’s director of facility services and construction. “Mortenson’s expertise in acoustically-sensitive buildings and collaborative approach with FGM Architects, HGA, IMEG, Webster, McGrath & Ahlberg, Theatre Projects, and acoustician Threshold Acoustics has really paid off in a beautiful, world-class facility that came in on budget and on schedule.”

Mortenson deployed innovative equipment, materials, and techniques to achieve optimal acoustics throughout the facility. The builder executed box-in-a-box construction for each acoustically-sensitive room by building double ceilings and double walls. “Floating” floors in studios, rehearsal rooms, and practice rooms were constructed with two layers of plywood on neoprene pads and then finished flooring, creating an isolated flooring system that prevents sound transmission between rooms.

Instead of installing traditional rigid threaded rod hangers for ductwork, conduit, and pipes, Mortenson and its subcontractors used color-coded acoustic spring isolators to hang different-weight pipes for water-carrying and electrical systems. This isolation prevents sound transfer through ductwork, pipes, and conduit that passes from room to room to serve building systems such as lighting, ventilation, and power. 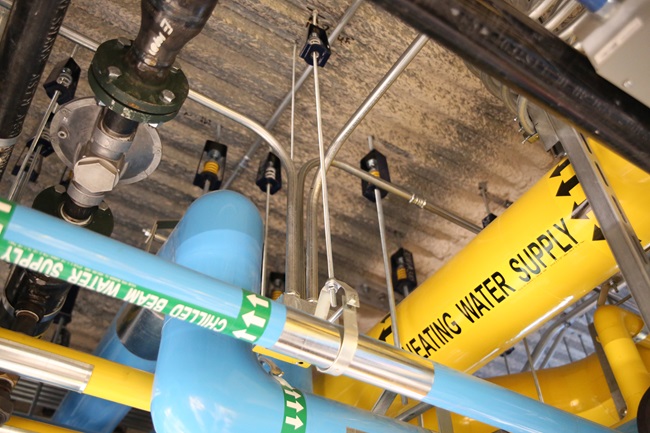 The HVAC for the recital hall is provided by a separate air handler which uses an underfloor displacement delivery system with 64 cored diffusers under the seats. This system provides excellent comfort, no air noise, and energy efficiency. The previously raked seating lecture hall concrete floor was removed and replaced with a new flat, shaped concrete floor system to achieve maximum volume for the acoustical goals of the recital hall. Mortenson achieved this challenging transformation successfully for a signature room in the new facility.

“The new Armerding Center for Music and the Arts is a testament to Wheaton College’s vision and commitment to offering the best in performing arts education and performance,” said Carolyn Sizemore, senior project manager for Mortenson. “Its renowned music program now has a dedicated, state-of-the-art home designed to help both students and faculty flourish. We are proud to have delivered such an outstanding space and look forward to another rewarding Wheaton College project with the new concert hall.”