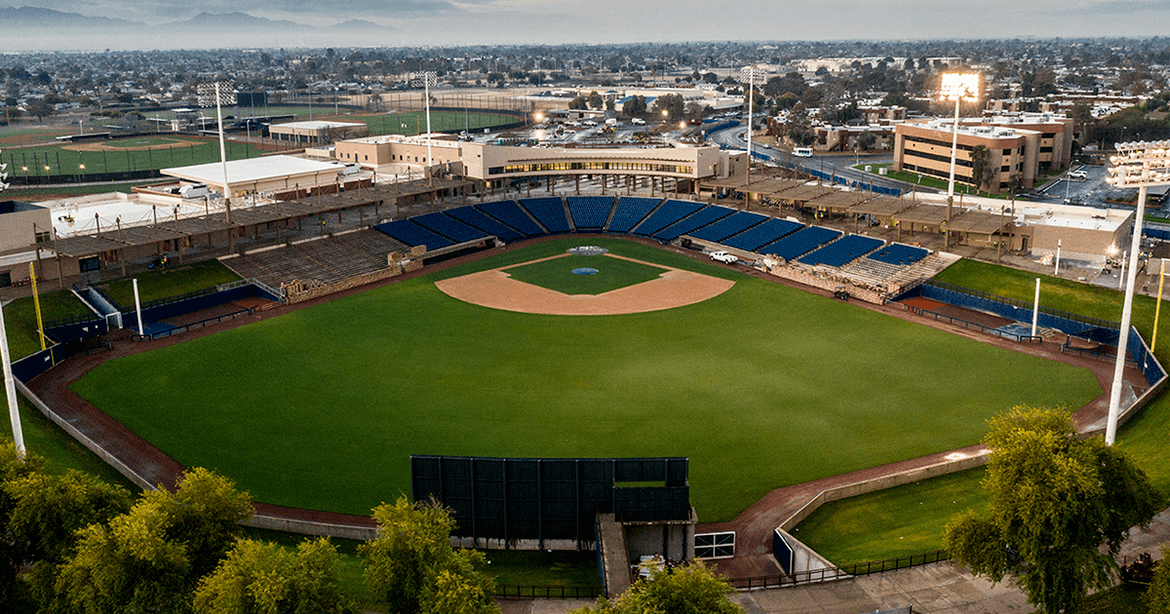 PHOENIX – The Milwaukee Brewers held a ribbon-cutting and dedication ceremony today at the team’s new Spring Training and Arizona player development complex, which also included an unveiling of the official name of the facility: American Family Fields of Phoenix. 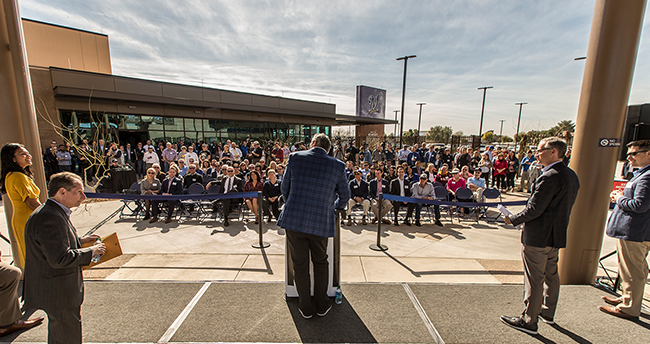 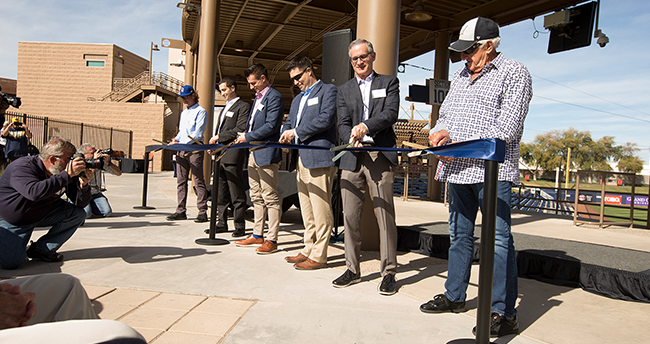 “Today we opened our new state-of-the-art Arizona facility, American Family Fields of Phoenix, and we are grateful for the commitment of the City of Phoenix, title sponsor American Family Insurance, the design and construction team and the many stakeholders who came together to make this a reality,” said Brewers Chairman and Principal Owner Mark Attanasio. “We initially developed three significant goals for the complex: to develop a world-class facility for year-round player development and Spring Training, to create a dramatically improved fan experience, and to demonstrate a commitment to investing in the community. With the complex now complete, we believe we have fulfilled this vision.”

On November 15, 2017, the Phoenix City Council voted in favor of a plan to renovate the team’s Spring Training complex, formerly known as Maryvale Baseball Park.  Four months later on March 20, 2018 – near the completion of Spring Training – the Brewers, along with the city of Phoenix and community partners, broke ground and construction was underway to completely rebuild the facility. 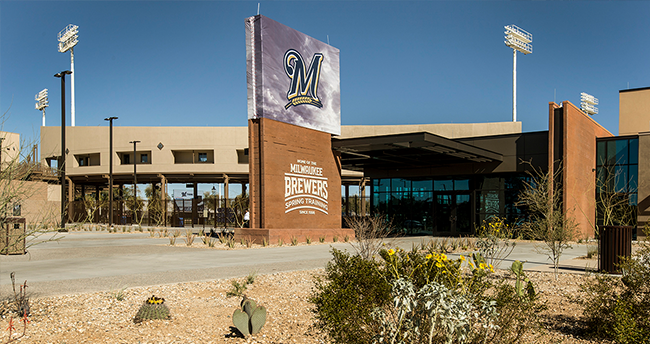 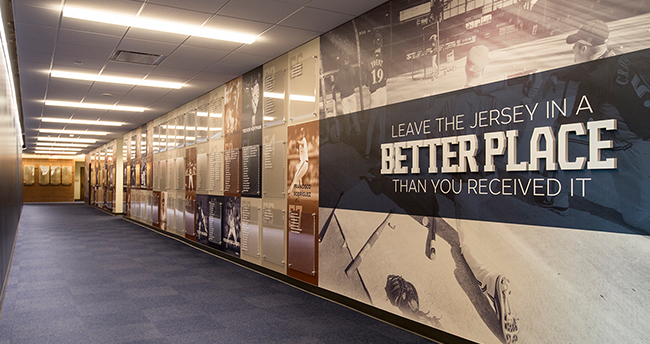 The Brewers invested $60-plus million in the construction phase of the program. The city of Phoenix is allocating $2 million each year for the next five years for renovations, and the Arizona Sports and Tourism Authority will contribute approximately $5.7 million.

“Phoenix appreciates the public-private partnerships that help strengthen the community,” Phoenix Mayor Thelda Williams said. “Along with the Brewers’ commitment to manage the city-owned facility and invest in renovations, we’re grateful the Brewers will also invest in the community by supporting year-round youth programs and tutoring.”

The project includes a new 106,000 square-foot clubhouse building with locker rooms and vastly improved facilities for all of the baseball operations functions, along with a wide array of fan enhancements from new concessions, retail stores, seating and a Daktronics video board.  The complex features a new entry plaza, renovated space for sports science and psychological services, an eight-lane batting tunnel, an agility field, new pitching and catching mounds, a high-performance practice field matching Miller Park’s dimensions, and improvements to each of the seven playing fields. 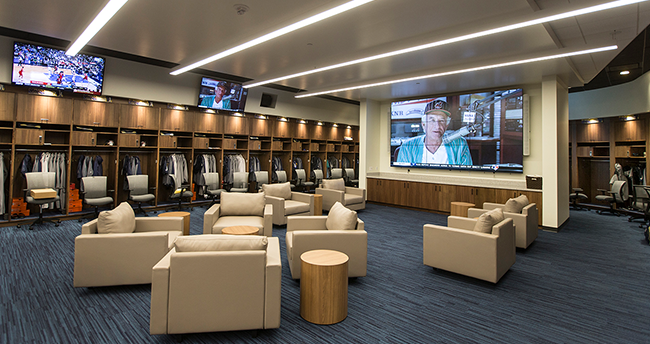 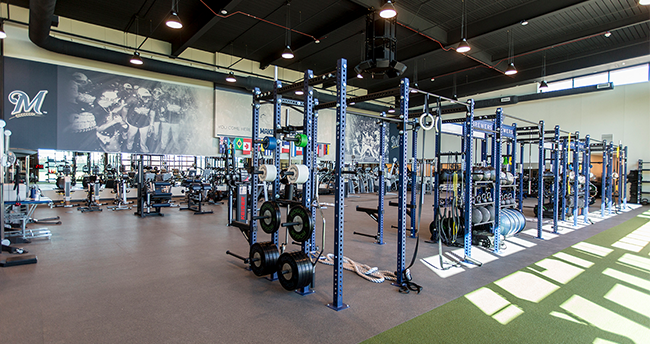 The Brewers oversee the operations and maintenance of the facility, which was designed by HKS and built by Mortenson. International Facilities Group served as the Owner’s Representative.

“Mortenson is proud to be a part of this transformative project,” said Ben Goetter, Vice President and General Manager at Mortenson in Phoenix. “It was inspiring to watch it all come together in just one offseason with nine and a half months of construction. The execution was made possible because of our successful partnerships with the Milwaukee Brewers, HKS, all of our trade partners and dedicated team members. Throughout the fast-paced, complex construction process, our commitment to safety was never compromised.”

“Congruent with the culture of excellence and community-connectivity exuded by the Milwaukee Brewers organization, the new Major League and Minor League clubhouses with associated training facilities, the new ticketing and entry plaza and new fan amenities will elevate the overall Spring Training experience,” said Mike Drye, HKS Principal. “Simple forms and materials were carefully selected, and the flow for the players, coaches, and executives allows for effective workouts while remaining connected to the outdoors and the fans. The American Family Fields of Phoenix complex will be a source of humble pride and a haven for developing athletes and inspiring fans.”

John F. Long, a longtime Valley developer, and his wife, Mary, originally donated 56 acres of land to make the team’s Spring Training complex a reality in 1998.  Today, the home plate entry plaza was dedicated in their honor as the John F. and Mary P. Long Plaza.  Without the Long family, the land used to develop this area would have never been possible (Maryvale was named after Mary Long). Jacob Long, son of John and Mary Long, was in attendance today for the dedication.

Along with the announcement of the facility’s official name, American Family today pledged $25,000 from the American Family Insurance Dreams Foundation to local non-profit organization Maryvale Revitalization Corp.  The donation was made in consultation with the John F. Long Foundation, established by the Long Family in 1959 to assist local charities, schools and education events, and meet general community needs.

“We are thrilled to have our name connected with this incredible facility as part of our Brewers partnership, while honoring the legacy of John and Mary Long,” said Jim Buchheim, American Family Insurance vice president of communications. “As a major employer in Phoenix and insurance company entrusted by Arizona customers since 1986, we love this community and believe fans will love the experience of coming to American Family Fields of Phoenix.” 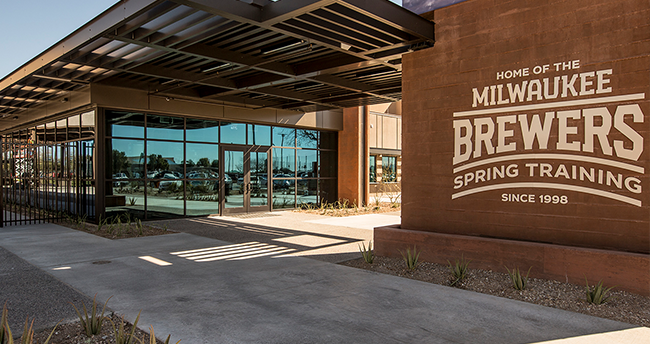 The Brewers begin Spring Training this week as pitchers and catchers report to camp tomorrow.  Position players have a report date of Monday, February 18 and the team will hold its first full workout on Tuesday, February 19.  The exhibition schedule consists of 34 games, including the first game at American Family Fields of Phoenix, on Tuesday, February 26 against the San Diego Padres. Spring Training tickets are on sale at Brewers.com, by phone at 1-800-933-7890 or by visiting the Miller Park Box Office or American Family Fields of Phoenix Box Office.