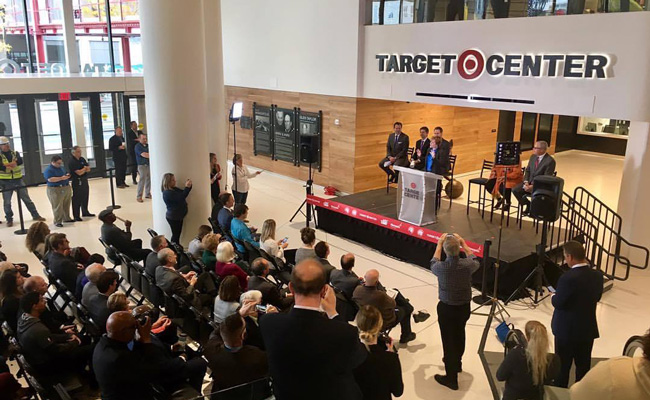 Target Center has been a fixture at 600 First Ave. N. in Minneapolis for more than a quarter of a century, but the city-owned home of the Minnesota Timberwolves and Lynx has never been more tied in with the downtown environment than it is now.

A $145 million renovation is expected to add decades to the building’s life and improve the fan experience, but it also connects the building more intimately with its surroundings, project architects said Thursday.

Speaking at a ribbon-cutting event to mark the reopening of the building, architect Tom Hysell pointed out new features such as the signature three-story glass atrium at the corner of Sixth Street and First Avenue, and an open concourse that offers views of First Avenue.

The renovated building connects with downtown “inside and outside,” said Hysell, a principal with Minneapolis-based Alliiance.

“When you are on the street and something is going on inside Target Center, it’s all lit up, it’s beautiful,” Hysell said in an interview. “And when you are inside, you can see the activity outside. And it used to be just a hermetically sealed box.”

Alliiance principal Ross Naylor said it was “really about capturing the views to downtown and allowing people to see activity that is happening in the arena. Before, if there was an event going on, you didn’t know until people exited the building.”

Thursday’s ribbon-cutting came on the heels of an 18-month renovation, which was completed just in time for the start of the 2017-18 National Basketball Association season. The event coincided with the 27th anniversary of Target Center’s original opening.

The renovation refreshed the building with everything from new suites and building systems to that shiny glass atrium, which functions as the building’s new main entrance.