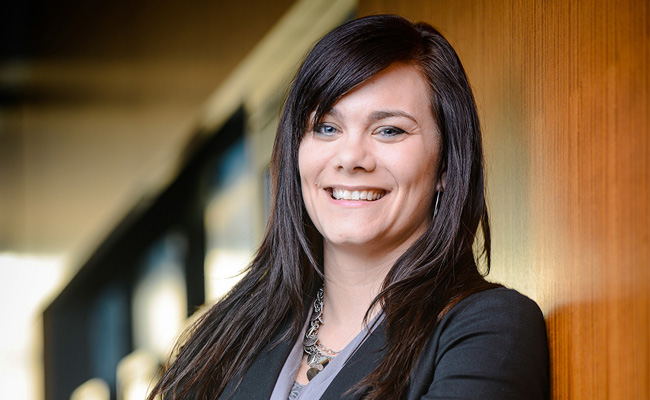 North Dakota Construction Executive Joanna Slominski was selected by Engineering News-Record (ENR) as one of their 2017 Top Young Professionals in the Mountain State region. This award recognizes individuals in the construction, architecture, and engineering industries who have built extraordinary portfolios early in their career and who dedicate significant amounts of time and expertise to serve their communities.

Joanna provides oversight for more than $500 million of work that Mortenson is currently completing across the State of North Dakota, including the $375 million Sanford Medical Center in Fargo. The Medical Center is the largest construction project in the State and one of the top 10 largest healthcare construction projects in the nation. “This was a truly innovative project,” said Joanna. “It allowed us to utilize cutting edge technology to deliver an amazing experience for the customer and provide value to the team.  It is exciting to be a part of creating the future of healthcare in the Fargo-Moorhead region and having an impact on the care of people for the next 100 years."

“Joanna is a talented, hands-on construction professional and respected throughout our company and industry,” said Darin Knapp, General Manager at Mortenson Construction. “She leads by example and delivers exceptional service and results for the customer.”

As a West Fargo resident, Joanna is very involved in the local community. She recently led a successful school supply drive for the United Way by collecting over $5,600 in supplies and monetary donations and raised over $34,000 for the March of Dimes. Joanna also led a Habitat for Humanity WomenBuild team, made up of women from Mortenson and Sanford Health. She consistently encourages team members to give of their time and talents; together they have been involved with Meals on Wheels, Ronald McDonald House, and Great Plains Food Bank.

Joanna demonstrated her commitment to future engineers by organizing on-site learning sessions and tours for construction students from local colleges and universities, as well as high school education programs through engagement at the Sanford Fargo Medical Center. Additionally, she is co-chair of the Advisory Board of Construction Management and Engineering at NDSU, mentors area University students, and is involved in outreach to local high schools with a Science, Technology, Engineering and Mathematics (STEM) focus.