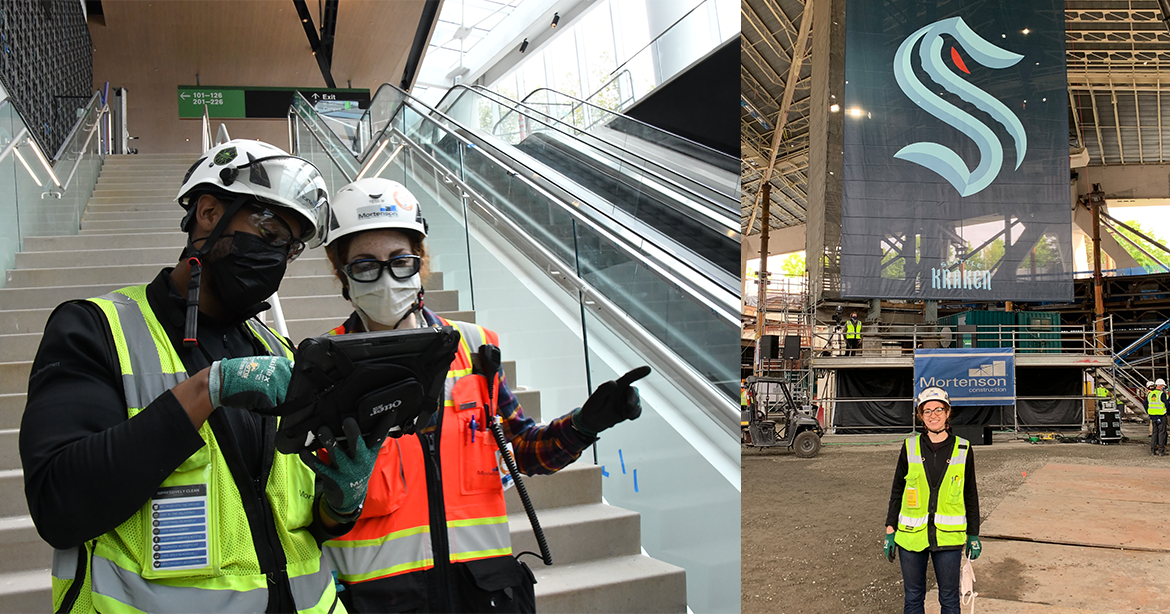 Tess became interested in construction when interning in the Marquette University architecture office while pursuing a degree in civil engineering. She found during that experience that she loved being on a project site and interacting with people. After graduating, Tess interviewed with Mortenson’s Milwaukee office and spent five years there as an engineer. She started working with our Sports office on the Milwaukee Bucks Arena project where she got her first taste of what her role as a superintendent could be. Tess then did a stint in Buffalo, New York working as an Assistant Superintendent before moving to Seattle.

Why construction? How did you get into the position you're currently in?

Tess: I actually never really thought I wanted to be in construction. I went to Marquette University in Milwaukee and had an internship working in their university architecture office, which is basically the campus planning and construction office. I found during that experience that I loved being on site and interacting with people a lot. I interviewed with Mortenson at the Milwaukee office and got a job after graduating, and here we are!

During my first job I had two carpenter foremen who took me under their wing. They would coach me through anything and didn’t make me feel like I was dumb for asking any questions. I loved working with them and being out in the field. For a long time, I saw myself in a superintendent role, but at the time there were no women to affirm that that’s a career path that I could take. Eventually there was a woman in the Milwaukee office who moved from a Project Manager role into an MEP Superintendent role. I spoke to her a few times when I was a Project Engineer to ask for advice and to learn more about her role. Shortly after, another female superintendent joined our office so suddenly there were two women to look up to. When I was working on the Buck’s stadium my Senior Superintendent on the project gave me a chance to test the waters when an enclosure superintendent was on break, and I’ve never turned back! After that trial week they handed over a small portion of the scope to run as the superintendent.

What do you find fulfilling about your job or this industry?

Tess: I feel really in my element when I’m in the field on site directing work. Coordinating with all the trades folks and being out there solving problems, building trust with people, and helping them be successful is really fun, challenging, and frustrating at some points. I love being really hands on with helping a building come together and the collaboration involved in that. At Climate Pledge Arena, I would have weekly walks with all the forepeople for all of the trades. I felt very empowered in those moments to lead, while also creating a safe space for people to bring their concerns to me. For me, that’s the pinnacle of getting a group of people together with the same goal to solve problems and see the physical results of that process months later.

What would people find surprising about your job or career path?

Tess: I still haven’t figured out the right way to deliver my job title when people ask me what I do. I think it’s still surprising for people in the construction field to hear of a female superintendent, which hopefully we can change. For people outside the construction industry, I feel they are fascinated by the innerworkings of a job site which is where I live every day.

Generally, people are surprised to see a woman in this role. That can be intimidating and empowering in different ways. It’s always fun when you prove that you’re legit, and it’s unfortunate that we have to continue to do that as women in this industry. Every project is a new job where you meet new people that you get to prove that you are good at what you do.

What's the most valuable lesson you've learned in your career?

Tess: Humility. There is such a fine line in this industry in terms of being firm and being in command, but also respecting your peers and the other people you’re working around. Knowing that people have this specialized experience and knowledge that you will only get better from is important. In this role, you really have to strike a balance because people respond to positive feedback and appreciate when you hear their opinions on how to do something. When I come across a problem in the field my gears are turning to see how we can solve the problem, but also to see how I can engage others to solve the problem as well. That builds trust and respect between groups. I think a lot of people are finding you can be effective as a superintendent without just telling people what to do.

What advice would you give to women in the industry or those interested in joining?

Tess: I feel like I’m lucky because I’ve had a chance to talk to a bunch of people in different groups throughout the years about being a superintendent. I’m really happy that more women are feeling comfortable in this industry. The first thing is overcoming that fear of “this is something I want to do, but can I do it?” My advice there is yes you can! A lot of it is knowing that you can remain true to who you are. You can be a woman in this industry, and you don’t have to change who you are to do that. There will be challenges, but it can be very empowering as well. It’s really cool to have the network of people I do at Mortenson. I had a really strong female mentor on my second job who’s still one of my close friends, and another group of women from Climate Pledge Arena that is a close group of female friends and support that I can seek career advice from. I have male mentors too, but it’s always nice to have a group of women too.

Read the other spotlights >>>