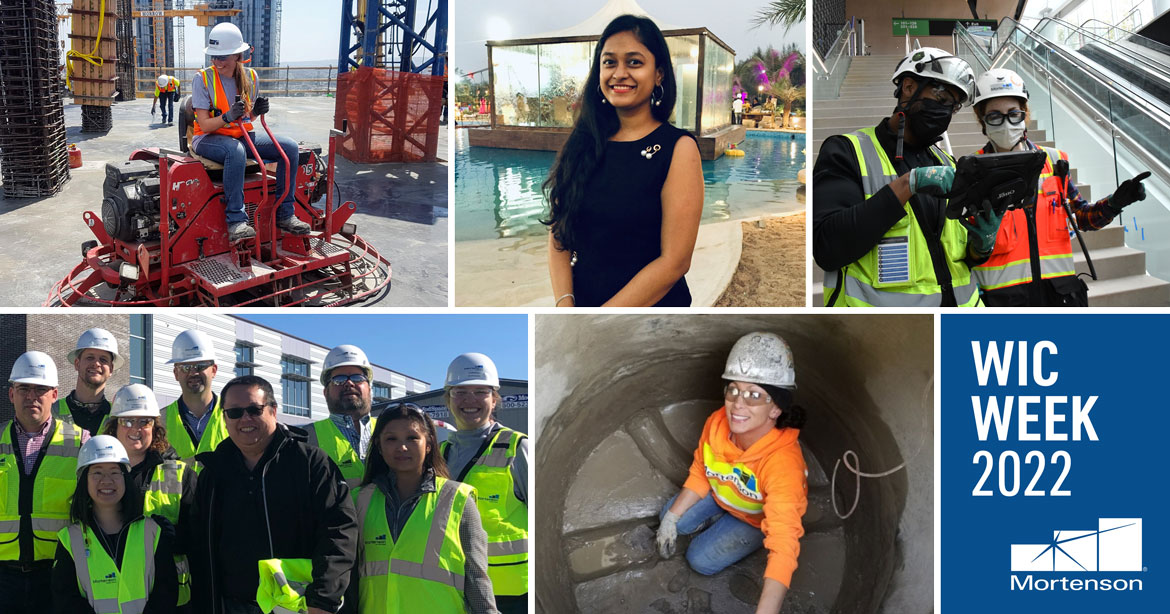 It’s National Women in Construction Week, and we asked women at Mortenson Seattle about their experience in the industry. See why they love what they do and how they're shaping the construction industry!

Construction has been a vocation for Danielle since she was a child. Her father hauled heavy demolition machinery and as a kid she loved riding in his truck while he dropped off machinery at project sites. Later in life, as a single mom tired of living paycheck to paycheck, Danielle turned to the construction industry. She had always been a hard worker, was physically able, and liked hard work. Danielle went to the Local 292 union to inquire about their apprentice program and quickly tested out. Her first job as an apprentice was with Mortenson on our Hill7 project. After a month there she transferred to the UW Medical Center Expansion project where she got a wide variety of hands-on experience. She then went on to work at AMLI Arc and Tilt49 in Seattle before moving to Climate Pledge Arena, where she was promoted to Labor Foreperson. Danielle has been with Mortenson for 8 years now.

Erin’s interest in the construction industry began when she was working for a residential homebuilder after graduating from the University of Washington. While she never would have thought she’d be working in the construction industry, her mentors guided her to a career that she has come to love. Erin joined the Mortenson team in 2008, and loves being a part of all types of projects and working with different teams. She is also passionate about serving on Mortenson’s Seattle Community Impact Team to coordinate local engagement efforts with our team members.

Kim started her career with Mortenson in 2018 after graduating from Montana State University. She moved to Seattle for her first project – the Bill and Melinda Gates Center for Computer Science and Engineering. Kim then traveled to Minnesota for scheduling training before moving to Los Angeles to work on the citizenM Hotel project. After two years, she was excited to move back to Seattle to work on the finishes at Climate Pledge Arena. While not an avid hockey fan, she loves going to Kraken games and finds it very rewarding to see everyone enjoying a space she and her team poured so much time and energy into perfecting. She is currently working on preconstruction for the Four106 office tower in Bellevue, with construction beginning in early 2022.

Prutha’s interest in building was sparked from a young age when watching her father, an architect, work. This led her to pursue a degree in architecture in India and later her master’s in Urban Design in London. She enjoyed working as an architect and urban designer in India for 5 years, but realized she wanted to have a different role in creating buildings. While pursuing a Master of Science in Construction Management at the University of Washington, Prutha interned with the Mortenson team in Seattle. She joined our team full time as a field engineer in 2021 and has enjoyed being able to influence the design and vision of a project from a new angle while utilizing her background in design.

Tess became interested in construction when interning in the Marquette University architecture office while pursuing a degree in civil engineering. She found during that experience that she loved being on a project site and interacting with people. After graduating, Tess interviewed with Mortenson’s Milwaukee office and spent five years there as an engineer. She started working with our Sports office on the Milwaukee Bucks Arena project where she got her first taste of what her role as a superintendent could be. Tess then did a stint in Buffalo, New York working as an Assistant Superintendent before moving to Seattle.