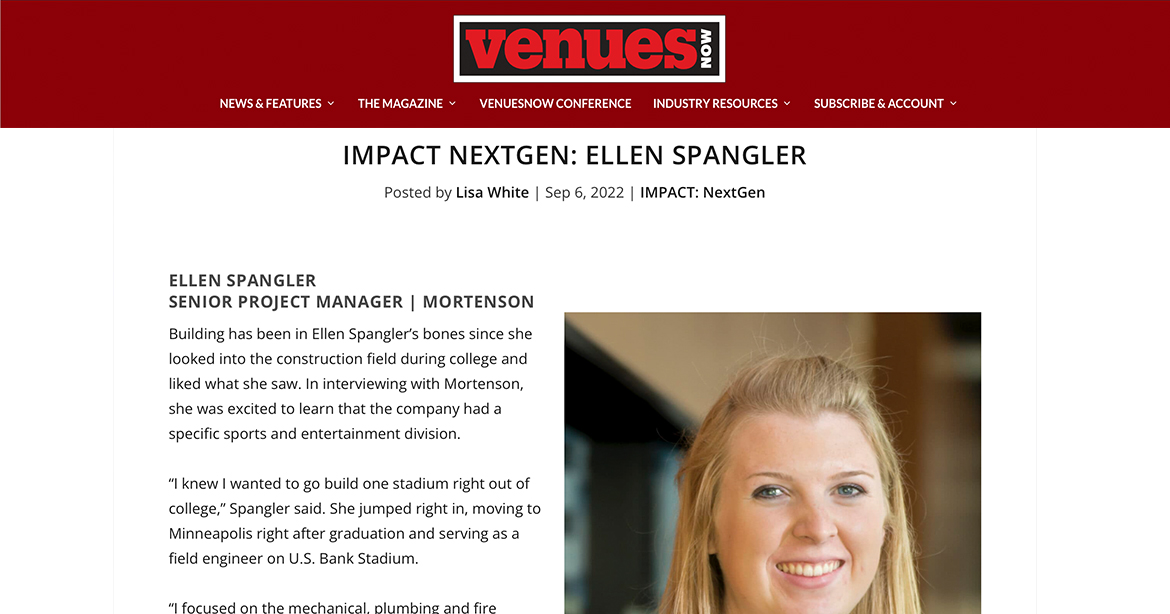 With skill, tenacity and grit, Ellen Spangler is a rising start at Mortenson. VenuesNow features Ellen in their Impact NextGen series on AEC professionals. Ellen loves construction due to its complexity and especially enjoys working on Sports projects because they are high public profile projects. She is currently finishing up her fourth sports facility. With each new assignment, she enthusiastically accepts and starts packing. Along with her and her husband Alex, another project manager at Mortenson, she travels the country with her thoroughbred horse Ty building some of the best stadiums and arenas in the country.

Building has been in Ellen Spangler’s bones since she looked into the construction field during college and liked what she saw. In interviewing with Mortenson, she was excited to learn that the company had a specific sports and entertainment division.

“I knew I wanted to go build one stadium right out of college,” Spangler said. She jumped right in, moving to Minneapolis right after graduation and serving as a field engineer on U.S. Bank Stadium.

“I focused on the mechanical, plumbing and fire protection scopes,” Spangler said. “Though I originally intended to move back home to Denver after one stadium, I was hooked.”

She has now completed four stadiums and is getting ready to start the fifth this winter.

Spangler notes “the incredible opportunity” she’s had to be on construction teams for U.S. Bank Stadium in Minneapolis and Allegiant Stadium in
Las Vegas.

“Managing the enclosure scope of work at Allegiant Stadium was very rewarding,” Spangler said. “The black façade and the ribbon lights are always shown on TV, and we’ve received a ton of positive feedback on the aesthetics and seamless look of the stadium.”

Spangler is currently leading the team in St. Louis on Centene Stadium, a Major League Soccer facility, which she says has been an honor.

Want to join our amazing team?

Check out our careers page for new openings and be the next rising star.