to main content
Newsroom
NewsInsightsPodcastsVideosMedia Contact
Insight
Building on Differences
When most of your workforce is Latino, diversity initiatives take on a new urgency. 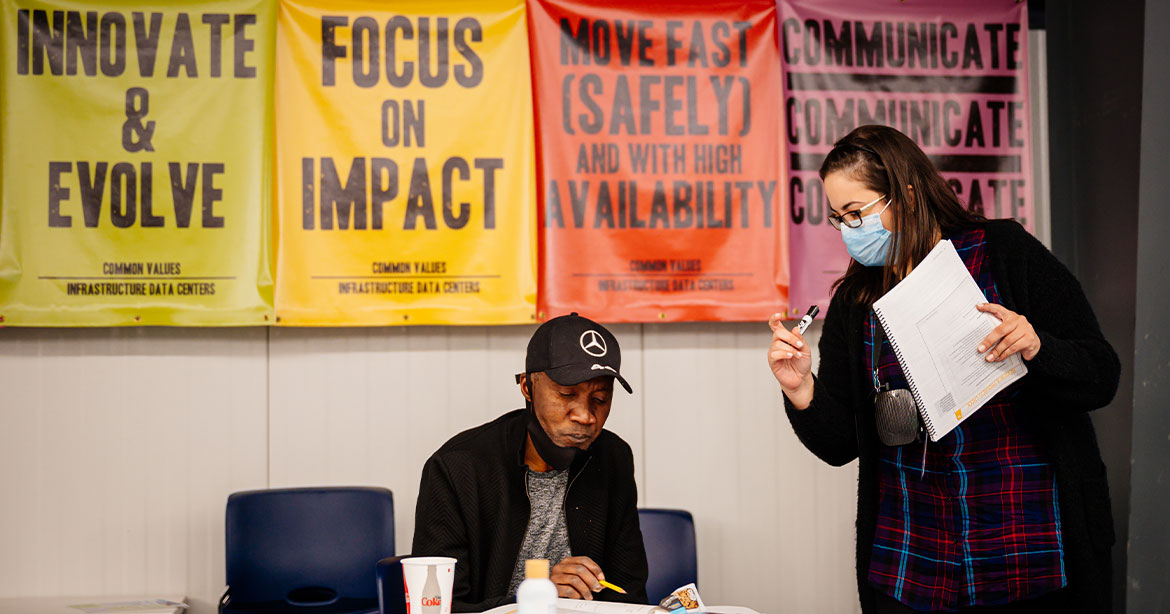 It’s a scene that happens every weekday around 6:30 a.m. in Eagle Mountain, Utah, where a new 2.4-million-square-foot data center for social media giant Meta (formerly Facebook) is being built. Inside a temporary building, about 100 employees of the construction company Mortenson loosen up, turning their heads and extending their arms, while music pulses in the background. A few minutes earlier, managers outlined safety precautions for the day ahead. 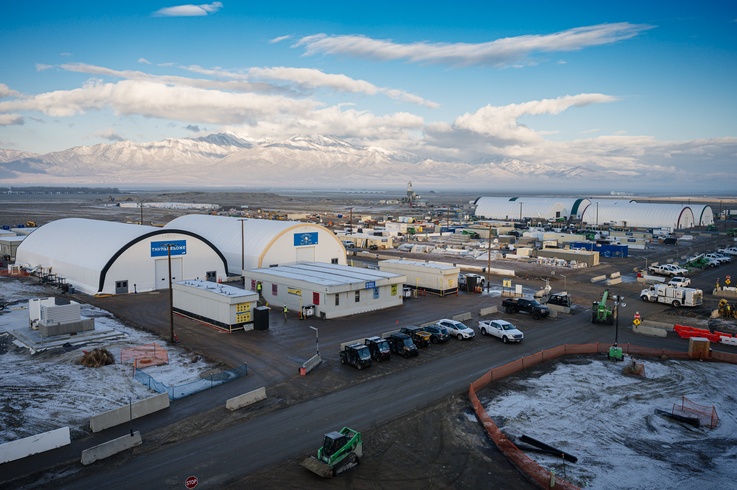 “Weee took the looong way round …,” Ed Sheeran croons today, but often the meeting soundtrack is a song that’s popular in Latin America – by artists such as Vicente Fernández, Marc Anthony or Carlos Vives. That makes sense, because more than two-thirds of this Mortenson crew hail from Latin America, chiefly Venezuela and Mexico. Many of those Latino team members wear Bluetooth headphones so they can hear instructions from an interpreter speaking Spanish every morning. 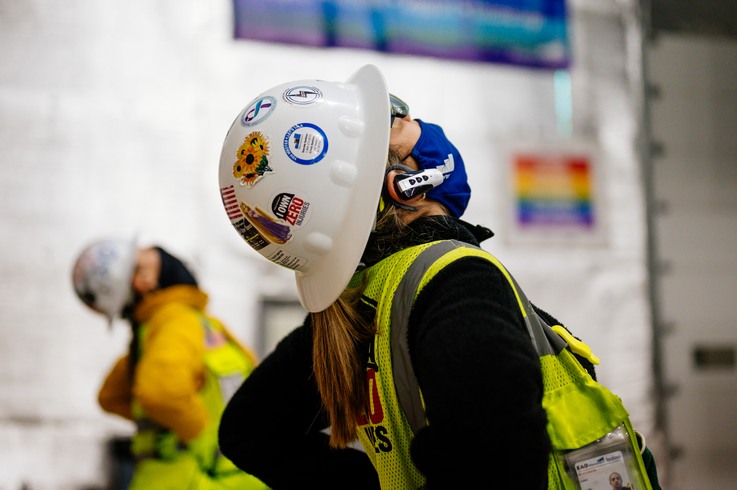 Mortenson employee Thaibe Lopez leans back during the company’s daily “bend and stretch” meeting on a chilly December morning at the Meta Data Center job site in Eagle Mountain, Utah. 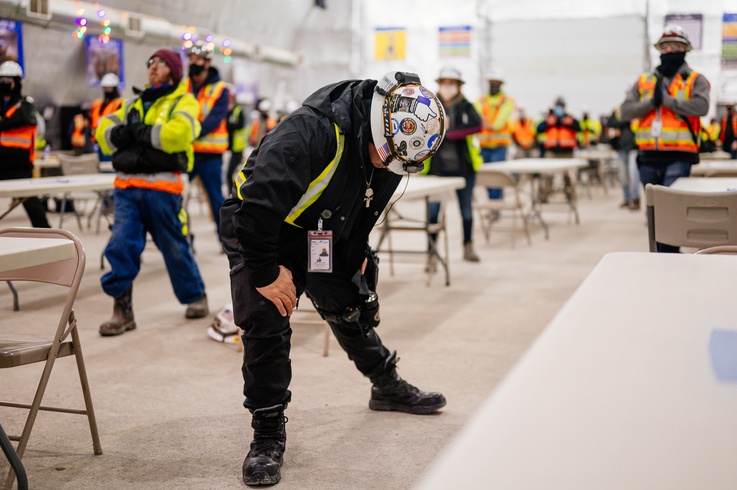 Mortenson foreman Lehi Lara stretches during a “bend and stretch” meeting. Employees participate in a pre-work stretching routine and listen to that day’s announcements, which are offered in both English and Spanish.

Increasingly, across the United States, construction crews are majority Latino, said Juan Pascua, executive director of the Utah Hispanic Chamber of Commerce. “This is not only in terms of employees of these companies, but also in terms of many subcontractors,” who provide roofing, framing, painting, electrical and other services, he said. According to the U.S. Bureau of Labor Statistics, construction has a higher percentage of Latino workers, almost 36%, than any sector except for farming and maintenance. Of course, because some Latinos are undocumented and not counted, the official numbers are likely low.

That trend presents a conundrum for construction companies in the United States: How far should they go to accommodate Spanish-speaking workers? How should they bridge the language gap in an industry where a misunderstanding can be dangerous, even fatal?

As a contractor that brings in almost $5 billion in revenue each year on projects ranging from sports arenas to wind farms to hangar complexes, Mortenson has confronted these questions head-on. The company offers bilingual signage, as well as a growing array of programs to its immigrant employees, from free English-as-a-second-language classes to a multiyear apprenticeship program for those new to construction. 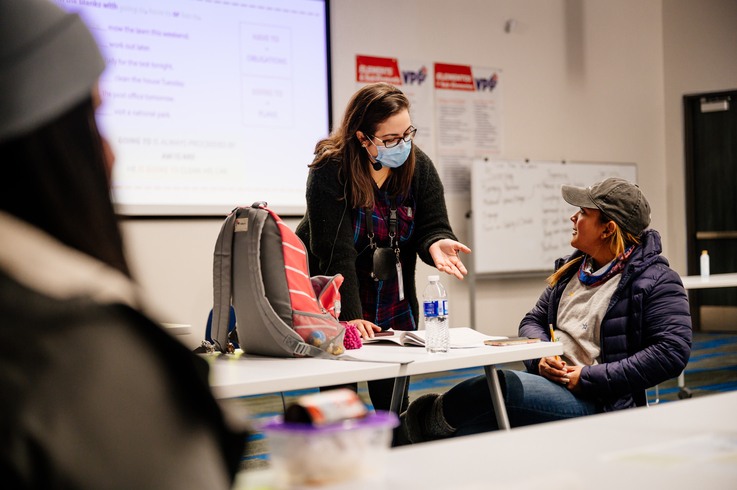 Denise Souza of Lumos Language School, left, works with Mortenson employee Milegna Martinez during a twice-weekly ESL class at the Meta Data Center job site in December. Free to all employees, the class enables nonnative English speakers to develop their language skills, which has both personal and professional benefits.

“What we do in construction is we solve problems every day,” said Steve Knighton, a Mortenson vice president who oversees the Utah data center project and another one outside Chicago. “The drawings aren’t perfect …, the material doesn’t always come out the way you need, the weather doesn’t always work the way you want it. You’re always solving problems, and to solve problems the best, you need diversity.”

That’s the sort of assertion you’d expect to hear from a corporate executive in this age of political polarization, social justice activism and workplace diversity-equity-and-inclusion programs. But Mortenson’s initiatives suggest it’s not just talk. And the company’s efforts to support immigrant workers — to provide not just steady jobs to people who really need them, but also opportunities to grow, to learn English and valuable skills — seem to be making a real difference for employees.

Making her way in a new country

Team leader Desiree Leal, 37, came to the United States almost eight years ago from Maracaibo, Venezuela. A college graduate and mother of two, Leal worked for an airline in her native country until the economy deteriorated and everyday life began to feel too dangerous. One day, a gang kidnapped her husband, and the family had to pay a ransom to free him. The experience was devastating. “That hurt us a lot emotionally and psychologically,” Leal said. “We knew we could not continue (in Venezuela).”

Fortunately, Leal had a tourist visa and a sister in Utah, and her job had provided her with cheap plane tickets to visit the state over the years. Full of uncertainty but terrified of remaining in their home country, the family made the move.

Leal’s first attempt to earn money in her new country was humbling. She found work as a janitor for a major discount store; she went from “working on an airplane to cleaning the floor and washing toilets,” she said. The manager promised to pay her in cash because her tourist visa didn’t allow her to get a job. But when she asked for her wages, he threatened to report her to immigration authorities, she recounted, crying. Around that time, her husband worked three jobs, washing dishes in a restaurant, painting houses and doing manual labor. Many weeks, he worked seven days. Life was hard.

Today, Leal is fully authorized to work in the U.S. and has many reasons to be optimistic. For most of 2021, she has led a cleaning crew for Mortenson, and the couple owns a small power-washing and painting company. Seven years after petitioning for legal residency, and paying the necessary attorney and immigration fees, Leal is hopeful that the family will be granted permanent-resident status at a proceeding slated for February 2022. 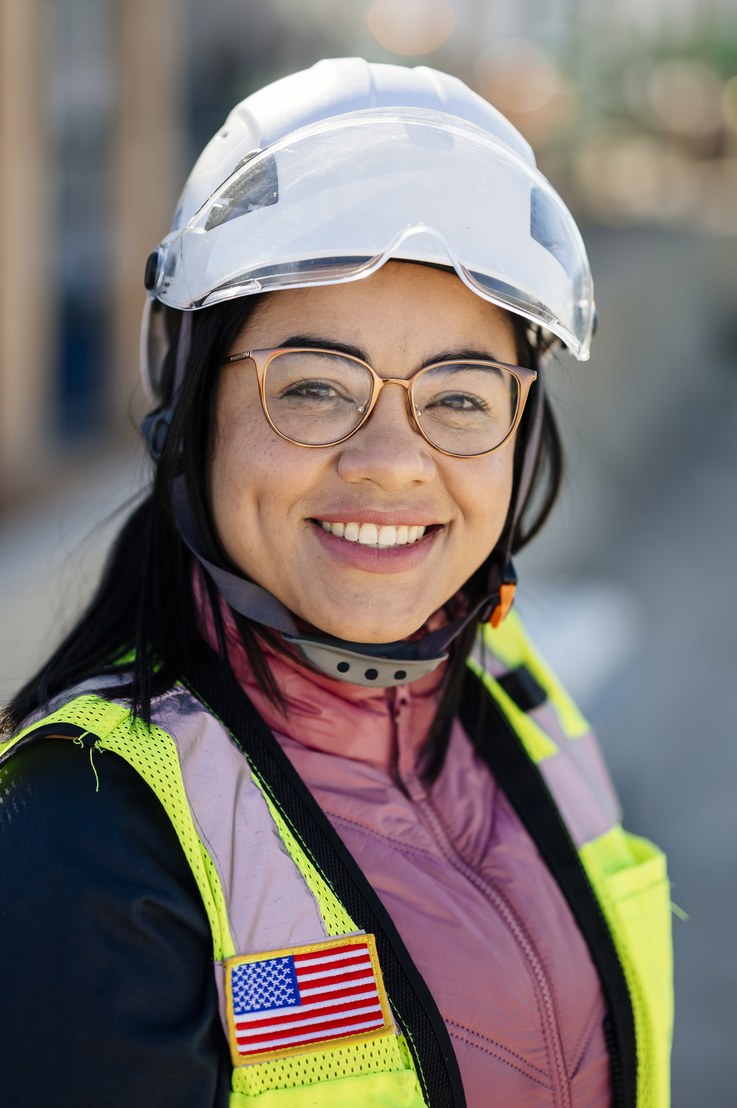 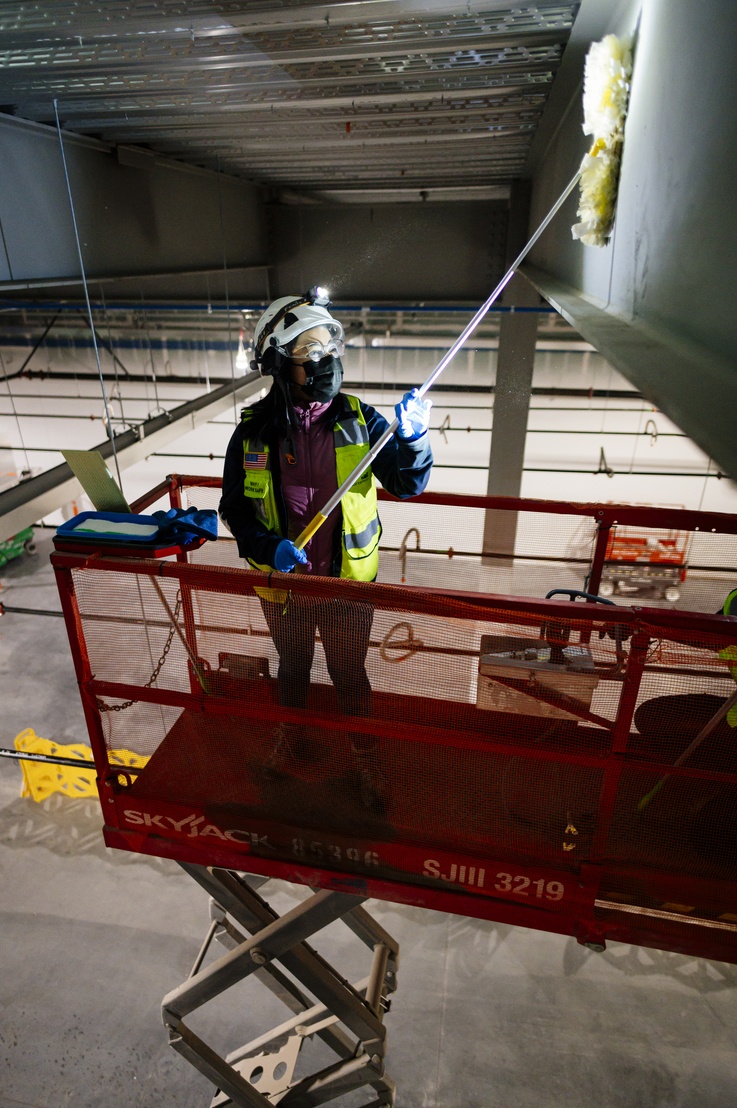 In December, she graduated from a free, two-month ESL class Mortenson offers on-site, and with her salary, she’s paying for more intensive English training at Utah Valley University in Orem, about 30 minutes away. Her limited command of the language is her main barrier to progress in the United States, she said. But her employer is helping her overcome that barrier. “I feel good (at Mortenson),” she said. “I really feel happy. … It is a company that is helping me grow.”

Omar Ramón, 24, who arrived in the United States five years ago from Matamoros, Mexico, is working on his language skills, too. “Working at Mortenson is helping me a lot,” he said. He’s discovered a gift for teaching co-workers how to find studs in drywall and drive a skid-steer, “to help others on things that they don’t know.” That sort of helpfulness and initiative is rewarded at Mortenson, he said. 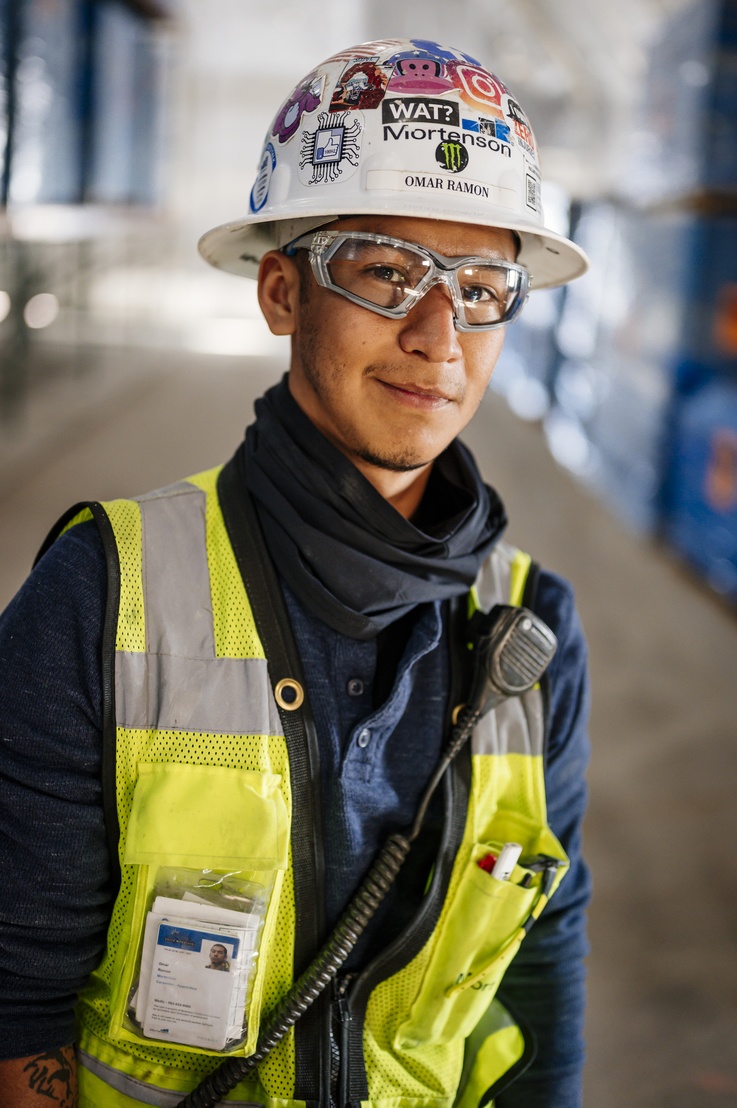 Omar Ramón emigrated from Mexico five years ago. He enjoys sharing his construction knowledge on the site.

For employees not only new to the United States but also to construction, Mortenson is launching a full-fledged paid apprenticeship program early this year. “Team members can choose between the carpentry and heavy equipment apprenticeship programs,” craft resource manager Kedmia Milam explained, “including modules covering concrete finishing, surveying, blueprint reading and many other topics.”

Apprentices can choose between instruction in English and Spanish. And the program is a significant commitment for both company and employee: Learning carpentry takes four years; heavy equipment takes three. The program can accommodate up to a dozen apprentices at a time.

Whatever their skill level, front-line construction employees can earn extra cash through a sort of bingo game that is focused on safety, engagement and informal leadership. Workers fill in squares on cards with stamps they’ve earned for taking actions beyond their specific job roles. At the end of the month, workers with stamps can take home an extra $25 to $600. 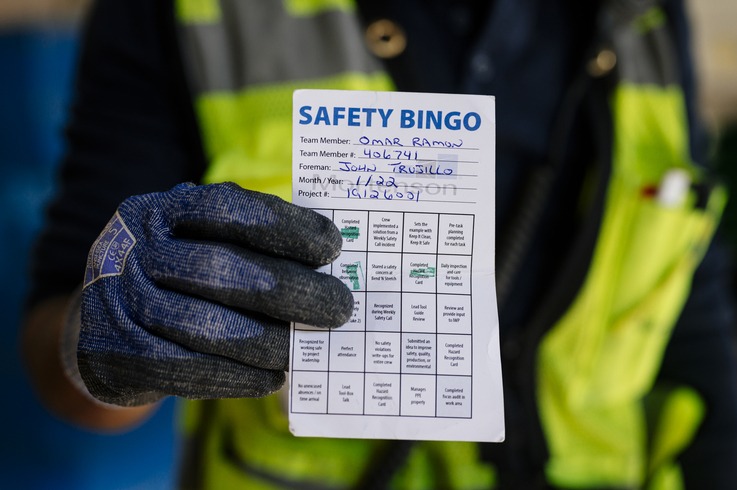 Ramón shows his bingo card. The bingo initiative, which pays cash rewards to employees for safety and initiative, is popular with employees.

Foreman Lehi Lara, who grew up in El Salvador, says the bingo game is a great way to foster initiative, not to mention safety and teamwork. “If somebody is not wearing their safety glasses,” Lara said, “a team member would come over to them and say, ‘You know what, you forgot your safety glasses; can you put them on?’ That would be a stamp right there because you’re actually helping somebody to remember they have to use their PPE.” 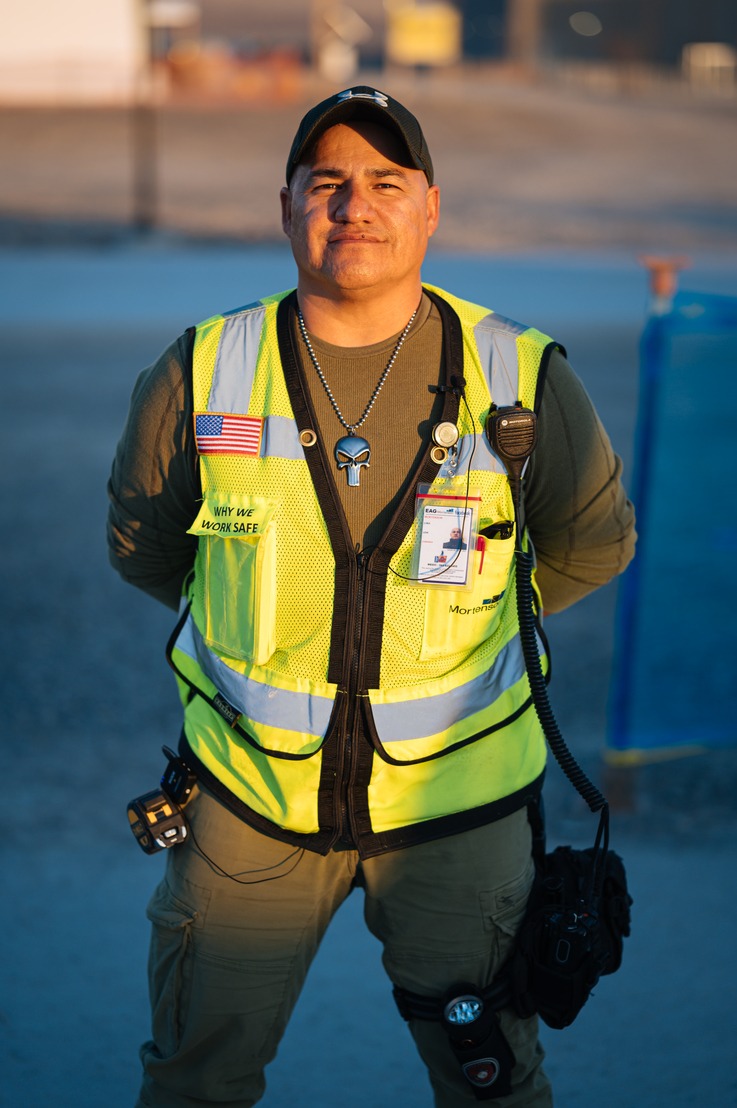 Desiree Leal uses what she earns from the bingo game to help her kids, ages 9 and 12, learn about money. “They already know that every month, mom will bring the bingo card. ‘Mommy, how much did you get?’ If I got $100, [they get] $50 and $50, and they are happy. They wait for the Mortenson bingo card with excitement.”

Juan Pascua of the Utah Hispanic Chamber of Commerce lauded Mortenson’s programs. "Initiatives like these,” he said, “are to be welcomed and praised because not all companies are doing it.”

Another Mortenson practice yields benefits that are more subtle, but still important. As Lehi Lara points out, Mortenson leaders create teams that are intentionally diverse, not just in skills but also in language and culture. That cross-pollination is just good for business, Steve Knighton said. The more diverse a work team is, the richer its problem-solving abilities are, he argued. “There’s new perspectives that we see coming to the company every day, and I think we’re just starting to tap into that talent.”

As is often true of well-intentioned initiatives, Mortenson’s efforts to embrace Latino employees are a work in progress. For instance, some signs at the Eagle Mountain construction site are only in English. The morning meeting’s simultaneous interpretation is mostly a summary of what the leader says and not the complete message in Spanish, Kedmia Milam concedes. 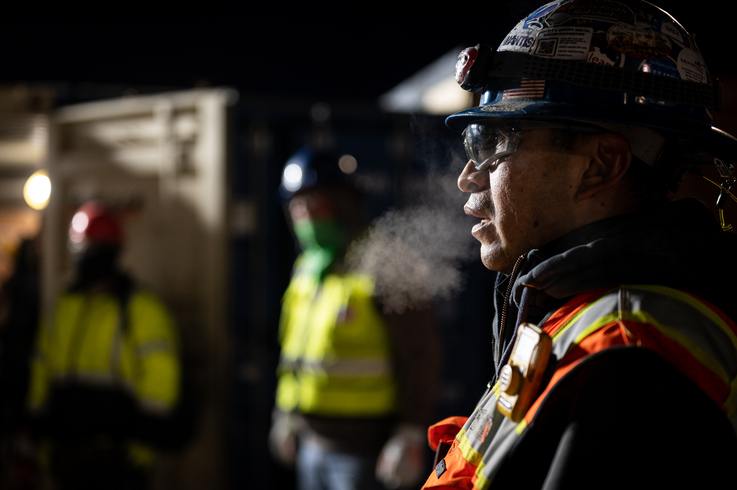 Mortenson carpenter foreman Adrian Martinez provides instructions to his crew of carpenters during their morning meeting at the Meta Data Center job site in December. Martinez is a native Spanish speaker but makes sure to repeat instructions in English so that everyone on his team understands. Twice a week, Martinez attends Mortenson’s free ESL classes to refine his English skills.

Moreover, the company had to stop work at Eagle Mountain and send 1,300 employees and subcontractors home for three days in November after two discoveries of hateful graffiti containing racial slurs. After the incidents, the company released a statement that read, in part, “(We) are committed to creating a culture of inclusion, fostering a diverse workforce, and to maintaining an environment where dignity and respect for everyone on our project is paramount.”

“As good as the culture at Mortenson is,” Knighton said, “there’s things that we’ve been blind to, that need to be spoken about more openly.”

A 2020 survey of people who work in construction found that 42% of construction workers had seen racist graffiti on a job site, 38% had heard verbal abuse and racial slurs directed to Latino and Black crew members, and 15% had seen nooses or other racist objects. Construction crews may be increasingly diverse, but many construction sites still harbor racism.

Mortenson has committed to diversity not because it feels right, but because it’s right for business. “Diversity makes companies stronger. But diversity requires effort to create unity,” Knighton said. “So, respecting the differences and yet still building that closeness, that close-knit team, is what makes companies successful.” 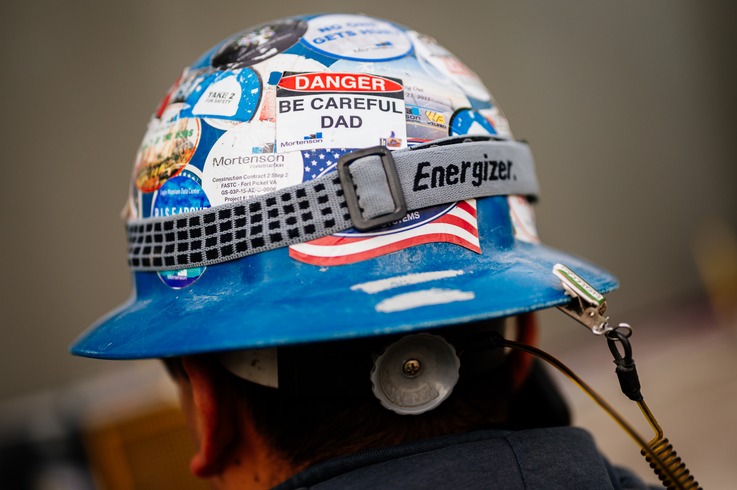 Omar Cabrera is a journalist who emigrated to Utah from Santa Tecla, El Salvador, two years ago. He now lives in Fairfield, Ohio.