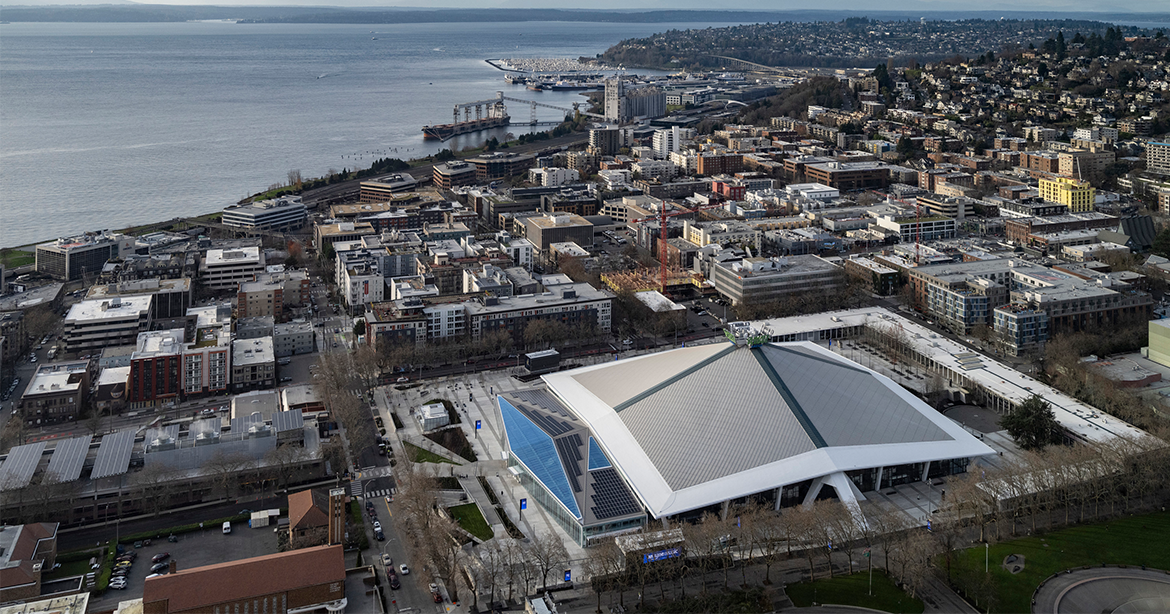 Construction of the new $1 billion world-class concert venue and home of the Seattle Kraken and Seattle Storm was completed in October 2021 on time for the Kraken inaugural home opener. The project exceeded all community benefit goals and successfully created long-lasting opportunities for local Seattle businesses and its diverse craft workforce.

It was important to ensure meaningful community engagement while building Climate Pledge Arena, especially as the country was impacted by the pandemic and going through complex economic and racial challenges. The construction of the Arena provided employment opportunities, job security, and professional development to a broad and diverse membership of the Seattle community. Our team set high goals for inclusion, and not only did we excel, but we were also able to involve the community in our project in a significant way.

The Arena created lifetime opportunities for individuals that have been historically marginalized in the construction industry and demonstrated how construction can transform communities through economic inclusion. As stated in the Seattle Finance and Administrative Services report, “Construction on the Arena offered quality jobs that provided living wages, benefits, career advancement and workplace safety, particularly during the country’s pandemic, economic and racial hardships.” Additionally, “Climate Pledge Arena created ample opportunity for women- and minority-owned (WMBE) contractors, moving the needle in contracting equity.”

Results were achieved through a comprehensive approach that included proactive planning, community engagement and outreach, mentoring and technical assistance, internships, and more.

“The culture of Mortenson and what they bring to the worksite is so positive and impressive,” says Community Liaison at Oak View Group Morgan Littlefield. “Mortenson and the support that they have brought to this community has been amazing. There were a lot of hours put towards education and supporting businesses to take them through not only the process but to help them understand the certification and how they could elevate their business and their opportunities.”

According to Michael Harder, Vice President and General Manager of Mortenson’s Seattle office, “It’s not about checking boxes, it’s about doing the right thing and making a difference.” He elaborates, “Mortenson’s team members are focused on Workforce and Supplier Diversity because it directly strengthens the economic health of the communities where we live and work. We are able to bring people into the workforce with craft recruitment and training, providing them with lifelong job skills. By ensuring to that underrepresented business have access to projects, we can help their businesses, families, and the communities they live in thrive.”

“The Mortenson team approach is always the art of the possible” says Steve Collins, COO of Oak View Group. “Mortenson, at the end of the day, it’s really about the people. The role they play is they foster a culture that allows and attracts the best in the business and gives them the tools that they need to do their job to embrace the project and figure out how to get it built.”