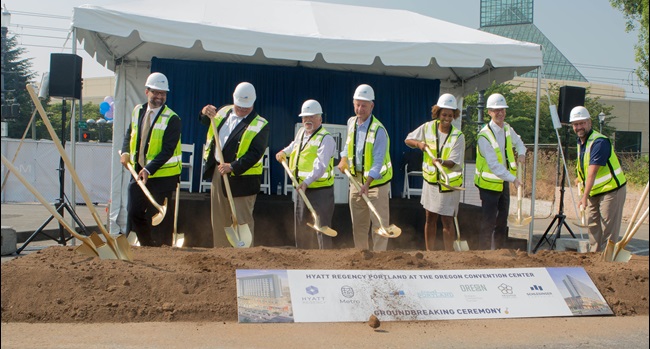 Nearly 30 years after it was first proposed, regional leaders set shovels to dirt Friday in the first concrete step to make an Oregon Convention Center hotel a reality.

A ceremonial groundbreaking, attended by about 200 people, marked the beginning of construction of the Hyatt Regency Portland, a $244 million, 600-room hotel that is scheduled to open in 2019.

The hotel, on the northwest corner of Martin Luther King Jr. Blvd. and Holladay Street, will feature ballrooms, restaurants and views of the city. But it’s the operational aspects that make it special to regional leaders.

Hyatt agreed to hold 500 of the hotel’s 600 rooms for large conventions that Travel Portland hopes to recruit to Oregon. It also agreed to a groundbreaking labor peace agreement that set the stage for improved union relations for a company famously cautious about labor relations. And the project is working to improve access to both minority- and woman-owned contracting businesses, but also to helping minorities and women looking to enter the trades as individuals.

All in all, regional leaders expect Hyatt visitors to spend $120 million a year around greater Portland. The hotel project received $14 million in local and state government grants. Room taxes generated at the hotel are expected to contribute another $60 million toward the project.