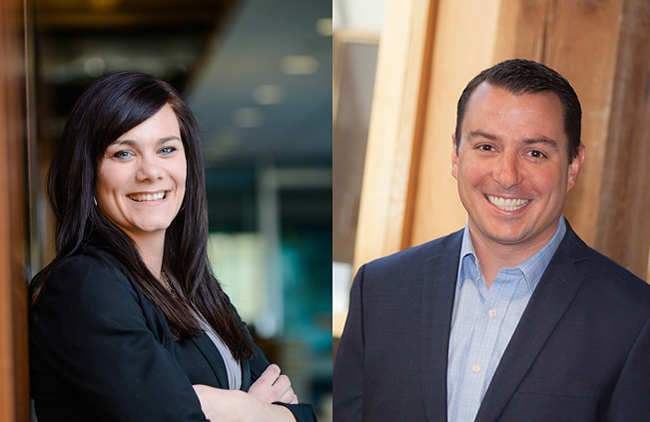 Two Mortenson team members were selected by Engineering News-Record (ENR) for their 2017 Top Young Professionals in the Mountain States region. This award recognizes individuals in the construction, architecture, and engineering industries who have built extraordinary portfolios early in their career and who dedicate significant amounts of time and expertise to serve their communities.

As a West Fargo resident, Joanna is very involved in the local community. She recently led a successful school supply drive for the United Way by collecting over $5,600 in supplies and monetary donations and raised over $34,000 for the March of Dimes. Joanna also led a Habitat for Humanity WomenBuild team, made up of women from Mortenson and Sanford Health. She consistently encourages team members to give of their time and talents; together they have been involved with Meals on Wheels, Ronald McDonald House, and Great Plains Food Bank.

Joanna demonstrated her commitment to future engineers by organizing on-site learning sessions and tours for construction students from local colleges and universities, as well as high school education programs through engagement at the Sanford Fargo Medical Center. Additionally, she is co-chair of the Advisory Board of Construction Management and Engineering at NDSU, mentors area University students, and is involved in outreach to local high schools with a Science, Technology, Engineering and Mathematics (STEM) focus.

Gene’s enthusiasm and ambition provided him with continually increasing responsibilities that he has tackled with aplomb, leading to a steady path of promotions throughout his 13-year career with Mortenson. As a member of the Denver’s Core Leadership Team, Gene has a significant involvement in the overall management of Mortenson’s Colorado operations, a top-rated local builder that has averaged $450M in revenue during the past four years.

Landmark projects that Gene has been involved with include the University of Colorado Athletics Complex Renovation and Addition, the new on-campus stadium for Colorado State University, the Coors Field Rooftop, the HARBORCenter for the Buffalo Sabres and the Pegula Ice Arena at The Pennsylvania State University.