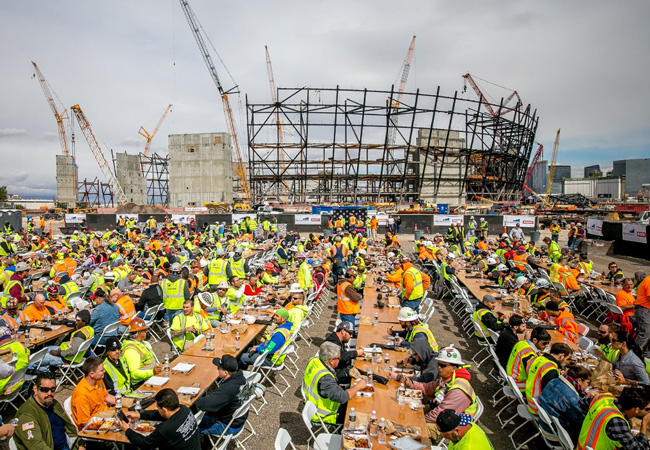 When the legislation and plan establishing workforce goals for the Las Vegas stadium project took effect, a benchmark of 38 percent participation by women and minorities was put in place. After more than a year of work, the goal has been shattered.

The Las Vegas Stadium Community Benefits Plan Oversight Committee learned Thursday that women and minorities completed 66 percent of the 1.3 million work hours performed on the project through the end of February.

“I took a tour of the site yesterday and can’t tell you how proud I am of this project and workforce that’s on it,” Committee Chairman Ken Evans said at the group’s quarterly meeting.

Board member Lynn Littlejohn, a liaison to the Mortenson-McCarthy joint venture general contractor working on the $1.8 billion stadium project, also reported a goal of giving at least 15 percent of contract work to Small Business Enterprise-qualified subcontractors was surpassed through February. The current SBE participation rate is 19 percent, with $179 million of the $924 million of subcontracted work awarded to 77 different SBE firms, 34 of which have multiple contracts. Littlejohn said preliminary calculations for March indicate the percentage is likely to rise to 20 percent. The 77 firms selected for contracts included 18 Women and Minority Business Enterprise-qualified companies.

Littlejohn said 68 percent of the firms awarded work on the project are based in Nevada.