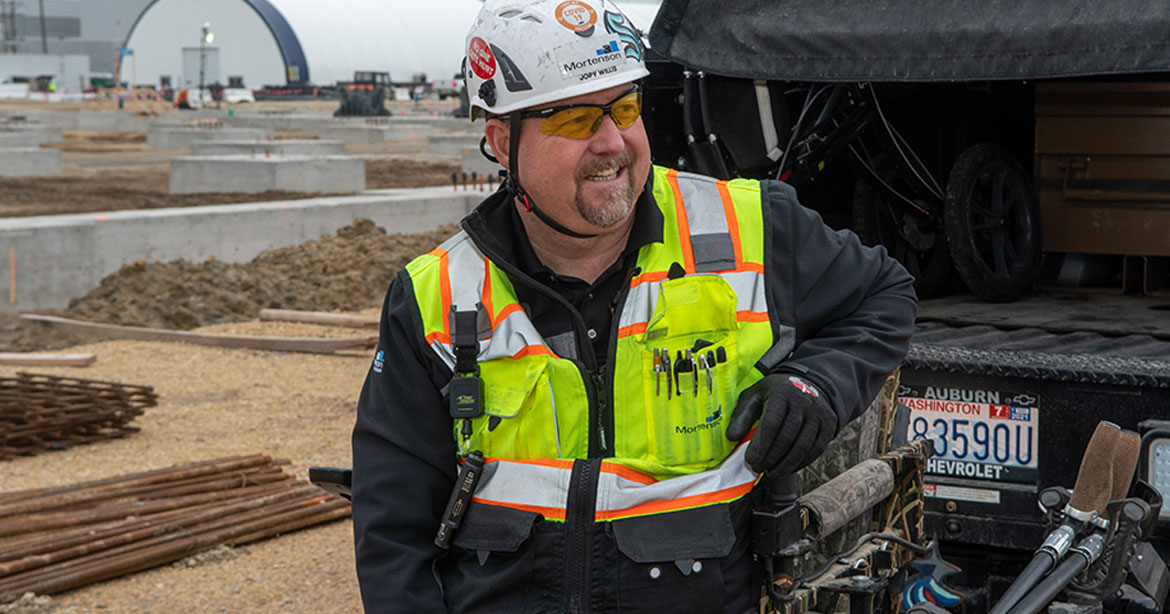 His 21-year-old son, Levi, was in the hospital after surviving a major car accident. Willis remembered wanting to make things easier for Levi while he couldn’t walk.

But crafting the ramp was also a coping mechanism, Willis added.

“When I need to get away, I start to build stuff.”

Three months later, Willis was at the company holiday party when he himself started feeling off. Willis recalled a stiffness in his legs that Saturday evening. At this point, the lifelong athlete was doing two high-intensity P90X workouts each day. He also traveled the country with a competitive men’s baseball team. “I told my wife, wow, I must be working out too much,” Willis recalled.

For Audra Willis, alarm bells sounded when her husband skipped baseball practice the next morning. She watched his health worsen over the next few days. By Thursday, he clearly needed emergency medical care.

But there was a problem: Willis was now struggling to walk.

“Luckily for us, we had a ramp in our backyard,” Audra said recently, betraying the family's tendency for finding the positive.

It was hardly the last time Willis would need that ramp. The sudden illness left him with a permanent spinal injury; he needed a wheelchair to get around for the better part of two years. Today, after more than eight years of rehabilitation, Willis navigates most environments — including construction sites — with a walker and hand crutches.

His physical limitations make Willis a rarity in the ultra-physical construction industry, where general superintendents like him traditionally log long hours and thousands of steps on unwieldy job sites.

“It’s extremely uncommon to be in this industry with a disability,” said Mortenson Social Responsibility Coordinator Joe Dailey, who has used a wheelchair since surviving a car accident in 2002.

In fact, in his 37 years at Mortenson, Dailey has encountered just one other employee with a spinal injury besides Willis. Physical disabilities seem to be a particular obstacle in a field like construction. But, as Willis’ story demonstrates, maybe they don’t need to be.

Willis started his career at Mortenson more than 33 years ago as a carpenter in the El Paso, Texas, area. “He’s a builder at heart,” said Seattle-based Field Operations Manager Greg Knutson, a Mortenson co-worker who counts Willis as a friend.

Over the decades, Willis worked his way up to superintendent on several high-profile building projects. He helped lead construction of the Denver Art Museum Frederic C. Hamilton Building (completed in 2006) and Walt Disney Concert Hall (finished in 2003).

Designed by superstar Frank Gehry, the concert hall was especially tricky, Knutson noted. “There are no straight lines; everything is multi-directional curves!” he exclaimed. “Jopy did a phenomenal job. The only way that happens is with a true builder.”

More recently, Willis was a superintendent on the redevelopment of Seattle’s Climate Pledge Arena, completed late last year. “That's a pretty crazy build we did there, probably one of the toughest jobs Mortenson has taken on,” Willis said of constructing the new venue while preserving (and hoisting) the site’s historic 44-million-pound roof.

Now Willis and his wife are settled outside Chicago, where he is overseeing construction of the DeKalb Data Center, an enormously technical project for Meta (formerly Facebook) with a phase I completion set for 2025. 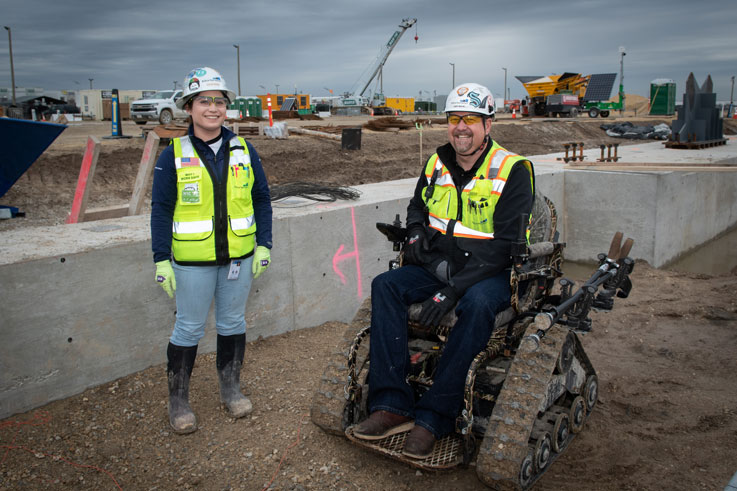 Willis chats with Paulina Carbajo, project engineer, on the site of the DeKalb Data Center outside Chicago.

After his wife took him to the emergency room in January 2014, Willis spent about 40 days in the hospital in Denver. The ordeal did not end with his discharge, largely because doctors were still stumped on his diagnosis. “Pretty much they said, ‘We're going to send you home and just hope the body starts to help,’” Willis remembered. “I'd gotten to the point where I was completely paralyzed.”

Mortenson leaders rallied and arranged for treatment at the Mayo Clinic in Rochester, Minn. But a diagnosis remained elusive. So far, the best guess is an inflammatory disorder called transverse myelitis. “They believe I had an overactive immune system,” Willis explained. “They think I had some kind of a virus. And in the process of attacking the virus, [my immune system] ended up attacking my spine.”

Willis spent about three months at Mayo before returning home for two years of outpatient therapy at Denver’s Craig Hospital. He returned to work (initially part time) on May 1, 2014, just over three months after going to the ER.

“I’ve been competitive my whole life,” he said. “From day one, I was going to come back.”

True to the family’s spirit, Willis now sees some upsides to his injury. For one, his disability requires him to prepare more. He arrives every day with multiple plans for getting around and solving problems. According to Knutson, Willis could even beat him in a two-block race from their office to a conference room near the Climate Pledge Arena project. “Jopy didn’t want to let his disability impede anything he was doing on the job site,” Knutson observed. “He worked hard so it wasn’t an issue.”

Willis also brings firsthand perspective to Americans with Disabilities Act requirements. “Before I would just build to code,” Willis said. “Now if I see something we may be able to make easier for someone in a wheelchair, I’ll say, ‘Hey, wait a minute.’"

In other words, he managed to stay exceptionally motivated and upbeat — Knutson went so far as to call Willis “my hero” for the example he sets. Not everyone should be held to his standard, of course, especially as the construction industry grapples with a historic labor shortage. So how can Mortenson recruit and retain other high-potential employees who happen to live and work with physical limitations? 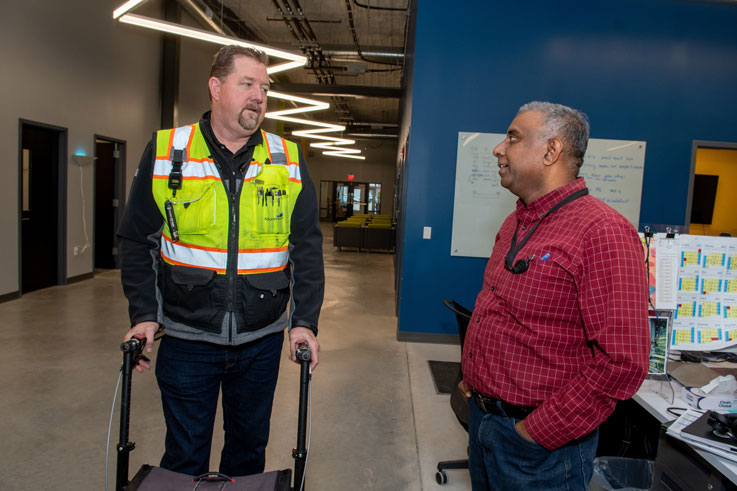 More than 80 percent of disabilities are the result of illness, injury, or age according to Felicia M. Nurmsen, managing director of employer services for the National Organization on Disability. Willis thinks Mortenson should keep stepping up for team members experiencing these crises. “When I was in the hospital and going through therapy, I met many people who had stories of losing their job the day they were injured or paralyzed,” he said.

But in his case, leadership not only arranged for care at Mayo Clinic, but also financed an all-terrain track wheelchair and three-wheel scooter to help Willis maneuver job sites. That generosity helped him stay positive in outlook. “I acknowledge all the time that my success has been because I’ve had a tremendous amount of support,” Willis said. 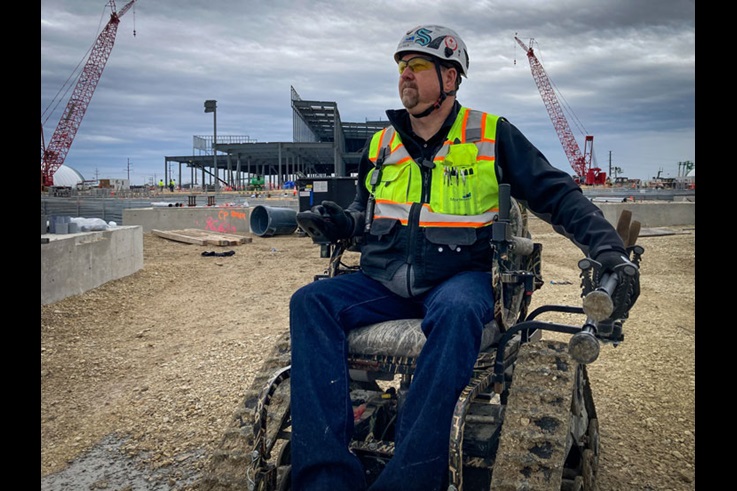 Jopy Willis, Mortenson general superintendent, in a track wheelchair he uses to navigate construction sites. Willis suffers from the lingering effects of paralysis that struck him in 2014 as a result of a mysterious illness.

Mortenson stepped up in similar fashion after Dailey’s accident 20 years ago, remodeling his house for his new mobility needs and fundraising for an accessible van.

Employees with disabilities are worth these investments, Nurmsen said, whether the onset of their challenges dates to birth, young adulthood or midlife. She pointed to a 2012 case study based on a high-tech Walgreens distribution center, which partnered with local disability agencies on hiring and training. “It was shown that employees with disabilities were either as safe or safer than non-disabled peers. They missed less work or the same. It never matched up with the myth of people with disabilities.”

Hiring and retaining workers with disabilities need not be chalked up to charity. In fact, Walgreens eventually expanded its disability employment initiative to retail locations nationwide, in recognition of a top-notch (and largely untapped) talent pool. Nurmsen believes construction companies could do something similar, despite the industry’s elevated needs regarding safety. “Safety should never be an excuse for not hiring someone with a disability,” said Nurmsen, who herself identifies as a person with disabilities. “Either you are a safe company — you provide the safety precautions that we need to be successful, and you’re willing to make adjustments. Or you’re not.”

At Mortenson, Willis thinks leaders could simply ask what employees need for safety and success on job sites. And the question should be posed regardless of perceived disability status. “There’s not a one-size-fits-all solution,” he stressed, because everyone has unique challenges.

Indeed, according to Nurmsen, 74 percent of disabilities are not immediately apparent, covering everything from brain injury to hearing loss. “One in four of us now has a disability,” she continued, citing a statistic widely circulated by the Centers for Disease Control and Prevention. “If you’re on a call with 10 people, at least two will have a disability or long-term chronic illness. We’re already working with people with disabilities. We just don’t know it.”

Today, Willis does his own physical therapy at home, where he makes “very incremental” gains toward his recovery goals. He has a treadmill, where he’s building endurance at 2 miles per hour. He also has a handcycle he rides while Audra walks their Yorkipoo, Rocky, and Tigger the miniature poodle.

But he’s pleased with his progress overall, Willis added. “Doctors told me I would never walk.” They said he’d need a wheelchair for the rest of his life. “I feel pretty good where I'm at now.”

The Willises have an adult daughter, Faith, who works in Mortenson’s Seattle office. Together, the family of four went through a lot over the past decade. Not only was there Levi’s car accident and Jopy’s sudden illness, but also Audra’s breast cancer diagnosis in 2019. She completed chemotherapy in October and recently passed her three-month checkup.

Through it all, the family’s religious faith proved a constant source of comfort and strength. At Mayo Clinic, for example, Willis looped Christian music through his headphones all day. And it settled the mind, he said, a reminder that God always has a plan.

You have the question of ‘why.' The answer is hopefully He can use me as an answer for a lot of other folks.”
Jopy Willis
Speaking about his illness

And Willis kept finding refuge in his toolbox. That is, he took on more home improvement projects despite his disability.

At their home in Colorado, where Willis once installed that fateful ramp, he undertook a landscaping project in 2018, complete with a new patio and tiered retaining walls. By that point, he was mostly using the walker and hand crutches. But he turned to his track chair for transporting pavers, according to Audra. “I recall a lot of neighbors telling him to stop, because he was making them look bad,” she said.

(Before and After) Willis has always found comfort in construction projects, even after it became difficult for him to move. In 2018, he installed a large patio and tiered retaining walls in the backyard of the Colorado home where he lived at the time. He used his track wheelchair to move pavers.

When the couple moved to the Seattle area in 2019, for the Climate Pledge Arena job, Willis remodeled the kitchen and removed a load-bearing wall, adding a steel support beam to open up the layout. “Even guys he works with were like, ‘What are you doing?’” Audra shared.

“I have to do it unconventionally,” Willis said of these projects. At times, he resorts to crawling, something he would never do in a work setting.

All photos (and video) by Nadia Oussenko. 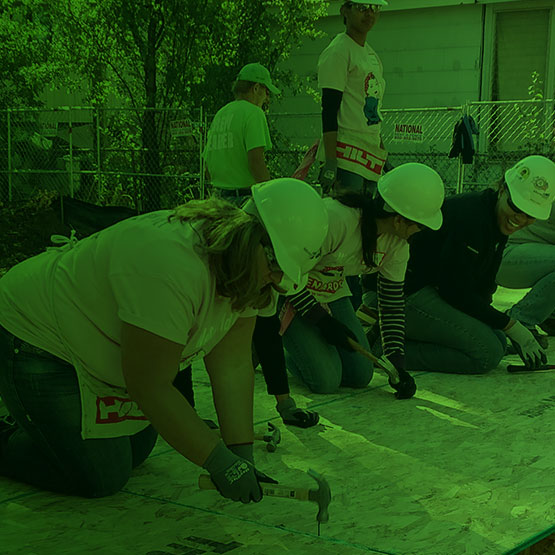 Building for the Greater Good

Our people, communities, and the planet on which we live come first in all that we do. 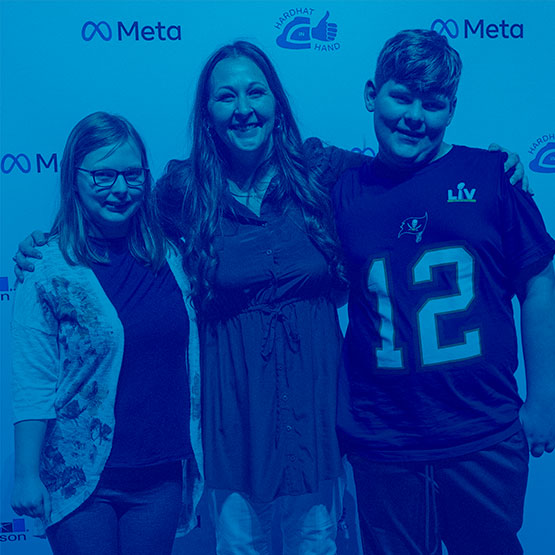