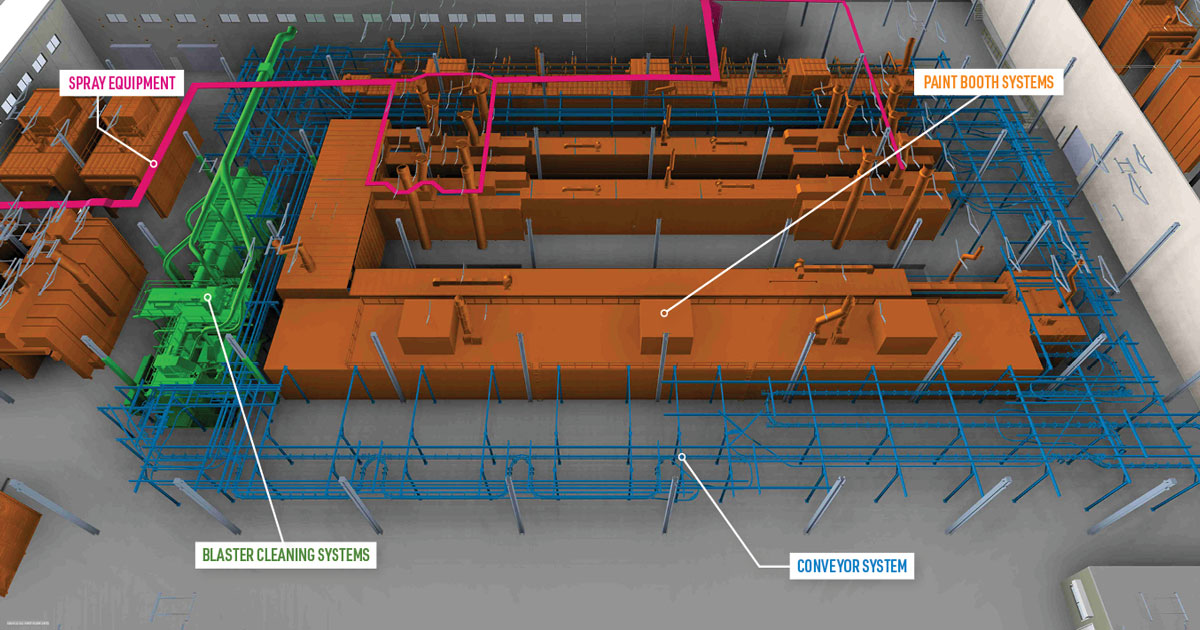 Vermeer is a global manufacturer of industrial and agricultural equipment located in Pella, Iowa. After two plants were lost in a tornado in 2018, Mortenson was engaged to rebuild a new 525,000 square foot facility. The new space expands production capacity with increased efficiencies and product flow, inclusive of ten value stream manufacturing and assembly stations, state-of-the-art weld fume mitigation mechanical system, and a best-in-class paint booth system.

CHALLENGE: Designing in a Silo

At the start of the project, it was realized that each team was individually designing the space for their equipment and creating their own installation schedule. Once the individual plans started coming together, significant spacing and schedule issues were realized: equipment panels were interfering with each other and systems were running into columns and walls. Additionally, installation schedules were not coordinated and did not account for key items that needed to be installed sequentially.

Realizing this early, Mortenson’s Virtual Design and Construction team worked  quickly to create an all-inclusive 3D model of the space, pulling-in information for each of the paint equipment systems. Once everything was in one place, over 100 installation clashes were identified (where two parts of the equipment interfered with one another).

The team held bi-weekly meetings, tackling individual problems and created an integrated schedule to install each piece of equipment. This collaborative process improved:

The paint assembly system was ready for testing and on-line as planned. Mortenson’s ability to offer our Virtual Insights team helped all stakeholders visualize the space and make key decisions on functionality and layout for each value stream. Another key benefit is the use of the 3D animation in employee recruiting and training by providing a line of sight into the entire process.

“Mortenson leadership and project management was instrumental in executing an aggressive schedule to get the new paint system installed and operational in time to meet our production needs,” said Vince Newendorp, Vice President & CAO at Vermeer. “Managing over ten sub-contractors, working in the same space at the same time was not an easy request, yet Mortenson’s leadership and organizational discipline once again proved why they are exceptional at what they do every day on the job site. And most importantly, the work was executed safely and without incident.”

Check out the manufacturing process at the New Plant 7 facility via our 3D model.