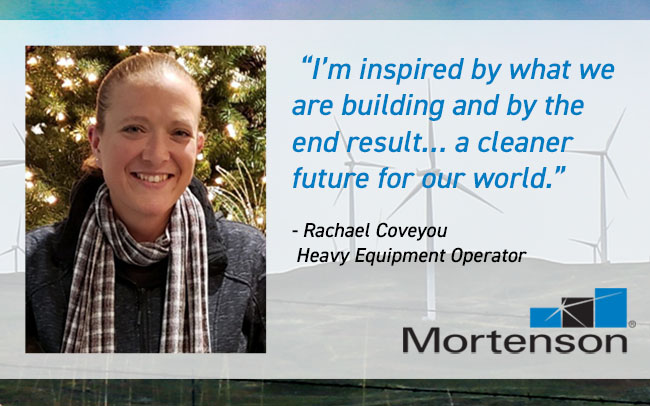 Rachael grew up 15 miles north of a small Alaskan town called Nikiski. Her dad owned a small construction business where Rachael worked and began developing the knowledge and skills she uses today.

After 10 years, she was ready for something different. That is when a friend introduced her to wind energy construction. She spent a few years working in the wind industry before she found the perfect opportunity with Mortenson in July of 2018.

Rachael quickly realized that Mortenson provided much more than just a job. It offered opportunities to travel, meet new people and experience new places. "Mortenson has always gone above and beyond to make traveling with my family as easy as possible."

Her kids also serve as a motivation for the work she does daily. She enjoys taking them to see the finished product and show them the parts that she built, "to see the pride in their faces is so very cool."

Rachael takes pride in her work. She sees it as a form of art and loves building a landscape that will stand for years to come. "I’m inspired by what we are building and by the end result… a cleaner future for our world."

Outside of work, Rachael enjoys bowling, cooking and going to amusement parks. She loves the outdoors and spends time during summer at her home in Alaska.