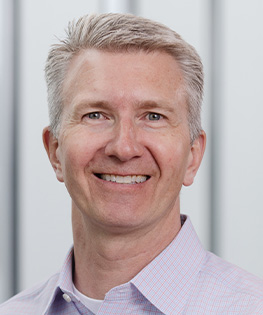 Originally from the Chicago area, Andy graduated from Iowa State University in 1995. After being awarded the Klinger Award for the Outstanding Graduate in Construction Engineering, he began his career with Mortenson. Currently serving as a Vice President & General Manager for the Chicago office, Andy provides leadership of the business development, marketing, design phase, and virtual design & construction teams in Chicago, as well as strategic oversight of the Mission Critical market.

Andy's unique technical background in MEP systems and passion for customer service has led to a robust career at Mortenson. Andy was selected to be part of Mortenson’s first international project, a substrates facility for Seagate Technology in Limavady, Northern Ireland. He has worked on a multitude of impressive projects, including the $211 million Walt Disney Concert Hall. In June 2003, he returned to Chicago to become part of Mortenson’s Chicago operating group. Since then, Andy has worked on over $900 million of healthcare projects in northern Illinois and northwest Indiana, while simultaneously leading Mortenson’s development of Virtual Design and Construction (VDC) and Building Information Modeling (BIM). He actively participates in promoting the progress and education of these dynamic areas of our industry.

Andy also served as the Director of Business Development for the Chicago office and was involved in many notable project wins for our group including two significant confidential data center projects, the Deerfield Library, Union Station, Big Ten Experience, and most recently the design-build University of Chicago Campus North Residential Commons.

Outside of Mortenson, Andy keeps a busy agenda filled with speaking engagements and civic activities. Andy currently serves on the Sinai Friends Board for Sinai Children’s Hospital and well as the Development Council for Advocate Good Samaritan Hospital. He also actively participates in the Construction Owners Association of America (COAA) as Membership Committee Co-Chair and is a member of the Design-Build Institute of America (DBIA).