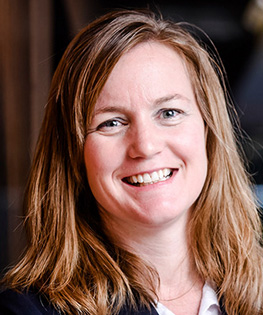 As Vice President of Operations, Kelly partners with Mortenson's Vice President and General Manager, Troy Blizzard, on the oversight of Mortenson's construction and field operations across Minnesota and the Dakotas. She joined Mortenson in 2000 after earning her degree in Civil and Environmental Engineering from the University of Wisconsin - Madison. Her calm demeanor and flexibility has proven invaluable to many customers who count on her to manage aggressive construction schedules and budgets.

Kelly serves as a mentor in the community and within the Mortenson organization. She's always looking for opportunities to share her experience and skills with women and youth in the industry. She currently leads a Mortenson Affinity Group, which serves as an education and networking platform for women to be successful in the workplace. She's been involved in the City of Minneapolis' Step-Up Achieve program, which helps youth learn on-the-job skills to get them ready for their future. She's also lead Mortenson's effort for Habitat for Humanity's WomenBuild and is a member of the National Association of Women in Construction.