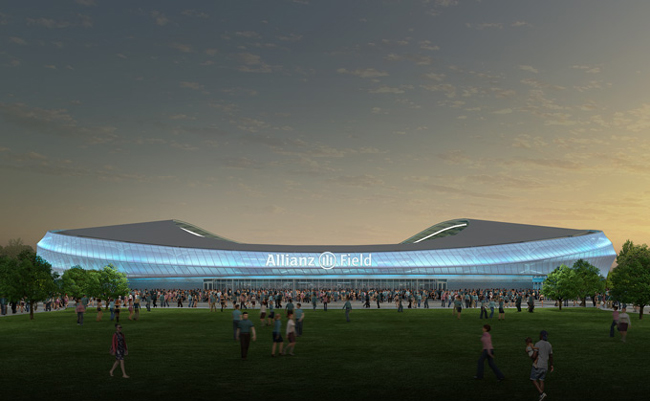 With construction halfway complete, builders of the new Minnesota United FC soccer stadium in St. Paul are turning their attention to the unusual fabric exterior planned for the structure.

During a media tour of the $200 million Allianz Field on Thursday, M.A. Mortenson Co. project manager Greg Huber said the structural steel and concrete work is nearly complete, despite adverse weather in April. Now workers are preparing to erect the first 10,000-square-foot section of the outer shell, which is designed to block wind yet remain translucent to sunlight or special lighting effects.

“It’s never been fabricated, actually,” Huber said of the synthetic shell material, which is a mesh woven of glass fiber yarns and laminated in PTFE, a polymer best known for its use in Teflon. “This is the first time this material has been used [for any construction project],” he claimed.

The first panel will be installed during the week of May 14, and attached to the steel ribs currently being erected around the structure. Also coming in the next few weeks are the massive speaker system and the “Safe Standing” section beneath the main video screen, which will accommodate up to 2,800 fans. The tiered standing area will be outfitted with rails and other features to prevent “crush” injuries, Huber said.

Dr. Bill McGuire, owner of Minnesota United FC, said the PTFE shell also plays a role in acoustics for the stadium, which sits at the busy intersection of Snelling Avenue and Interstate 94, just south of University Avenue.

“You can see how the roof is going to keep all this [noise] contained and push it back in,” he said.

But the roof creates its own problems, especially in winter, when much of the playing pitch will be in the shade for months on end. To keep the grass healthy, the design calls for a grow light array Huber compared to an “automated corn planter” that will be run over the grass in lieu of sunlight. There’s also an extensive infrastructure beneath the pitch.

“There’s miles of draining pipe and miles of heating pipe that just crisscrosses the field,” he said.

Huber also showed off a mock-up of the stadium seats.

“The seating system is mounted on a rail system so you can tighten them up if you need a little more capacity or spread them out if we need more space,” he said, noting the rails also allow the team to swap out different models of padded and unpadded seating in different sections.

Huber said the only major complication so far in construction has been the weather, but the project remains on schedule and on track for a home opener game, probably next April. About 225 workers are on site now, although that number will grow in the next month to more than 300.

“I’ve been fascinated through the winter watching the steelworkers,” McGuire said.“Remember, the first piece of steel went in last November. We’re about to top this off.”

Golden Valley-based Mortenson has done stadium projects around the world, Huber said, but there’s something special about working on this one.

“To do it in your hometown means the world to us, because it’s where we live and work,” he said. (Mortenson also worked on the stadiums for the Vikings and Twins teams in Minneapolis.)