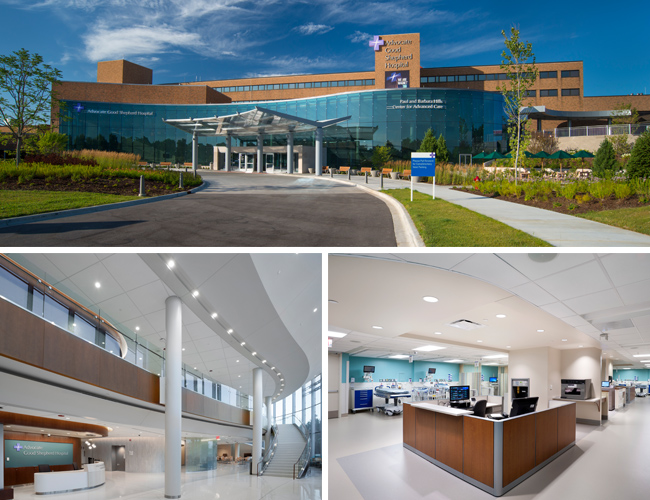 Excerpt from the Barrington Patch article:
The project has brought a number of "major improvements" at the hospital. Among them are four new inpatient units, including an expanded 18-bed medical intensive care unit and three medical/surgical unit. All of the hospital's 176 inpatient rooms now are private, and all new inpatient rooms are equipped with smart room technology.

…The expansion project has added 230,000 square feet to the facility and renovated 150,000 square feet in a project by Mortenson Construction, which was able to allow Good Shepherd to continue all operations and medical services during the entire construction period. To do that, the project was phased into 26 stages.

"Good Shepherd has clearly achieved its ambitious goal of creating the hospital of the future for its community. It responded to growing demand for such services as surgery, breast health and intensive care while making the facility more patient-friendly and efficient," Greg Werner, the Mortenson senior vice-president and Barrington resident who leads the firm's Chicago office, said. "This world-class facility is a true asset to Barrington and surrounding towns."
Click to read the full article.