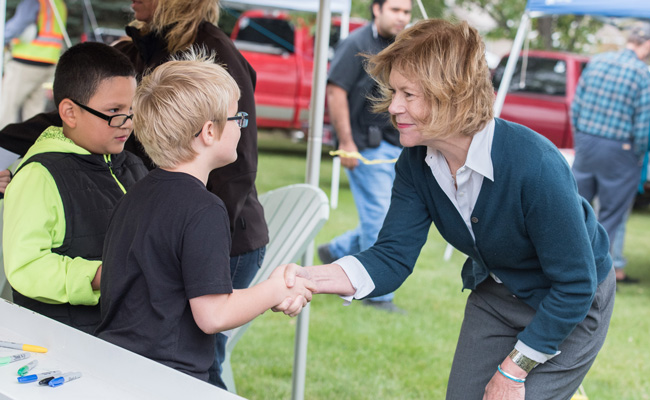 Lieutenant Governor Tina Smith visited CentraCare Health – Long Prairie on September 23, 2016 as part of a statewide tour of Minnesota's 87 counties. She met with hospital leaders and community stakeholders to take part in a local farmer’s market and a roundtable discussion to learn about how CentraCare and their area partners are meeting the needs of the community.

The farmer’s market had over 400 attendees, including 80 elementary students from Long Prairie-Grey Eagle Primary School and St. Mary of Carmel School. There was a craft station where each child received a pumpkin to decorate and a reading station with complimentary books, including Mortenson’s “Catch the Wind” and “Catch the Sun.” Community members gathered early in the morning to make apple crisp and Long Prairie-Grey Eagle high school’s culinary class made squash soup and vegetable sushi rolls to be served at the event.

At the roundtable discussion, CentraCare Health talked with Lieutenant Governor Smith and community stakeholders about several programs to reduce health disparities and build community through collaboration with public, philanthropic, business and community partners. The “Better Living: Exercise and Nutrition Daily” (BLEND) program was a featured topic of discussion. It works to improve the health of children in Central Minnesota by reducing the epidemic of childhood obesity. They also offer several programs, such as the farmer’s market and cooking demonstrations, designed to combat food insecurity by providing local families and community members with access to fresh produce.

Additionally, they celebrated the “Building a Healthy Community” campaign, which supported construction of the new, state-of-the-art Long Prairie medical campus. The facility will offer a new model of health care to better serve the nearly 24,000 regional residents with a focus on outpatient care rather than inpatient stays, better access to additional specialists, and privacy that meets today’s standards.

The final structural beam for the new Long Prairie facility was at the farmer’s market and was signed by the Lieutenant Governor, area students, donors, physicians, nurses, and the project team members. It was placed on September 27, 2016 at a community event. “We are so proud of the work you are doing, it’s just fantastic,” said CentraCare Health – Long Prairie Administer Dan Swenson, of all the contractors working on the project. “It’s been a wonderful partnership.”