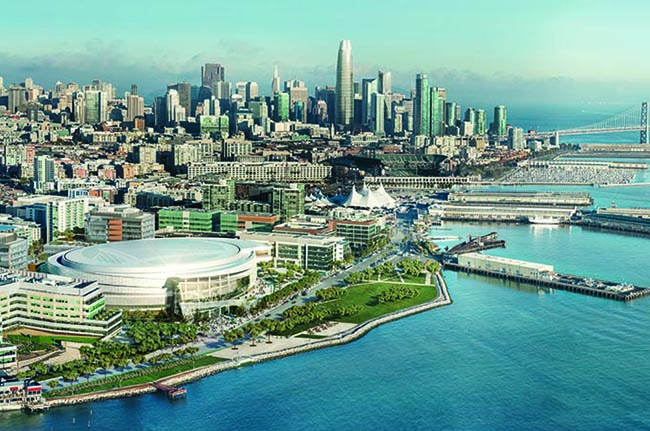 “The Mortenson and Clark team combines the strengths and resources of the top sports and entertainment builders in the nation, with a long and successful history of delivering projects in San Francisco,” said GSW President Rick Welts.

GSW plans to build its new state-of-the-art venue on an 11-acre site in San Francisco’s Mission Bay neighborhood. The project gained approvals late last year, and was unanimously approved by the Board of Supervisors in December.

“This location is a perfect fit,” said Joe Lacob, GSW’s Co-Executive Chairman and CEO. “It is an incredibly beautiful site near the Bay, in a dynamic part of the city that is convenient for fans from all over the Bay Area.”

The privately-financed project includes a state-of the-art 18,000-seat arena, two office buildings, 100,000 square feet of mixed-use/retail space, and underground parking. More than three acres -- 30 percent of the site -- will be plazas, landscaping and other public spaces.

“This project is going to be the premier venue of its kind,” said Steve Dell'Orto, senior vice president of Clark Construction Group. “We look forward to drawing on our 40-year history of building in the local market to provide excellent opportunities to businesses and workers in the Bay Area.”

“We have assembled our most innovative, energetic, and experienced team for this project,” said Derek Cunz, vice president and general manager of Mortenson’s Sports Group. “We are looking forward to delivering on our promise of building the best sports and entertainment venue in the country, and continuing our track record of success by delivering the project on time and on budget.”

“The Warriors are committed to using local businesses and local workers to design, build and operate Chase Center," said Steve Collins, chief operating officer of the new facility. “Already, through the design phase, we’ve awarded 40 architectural and engineering contracts with credits for SBE participation at approximately 50 percent, meeting OCII’s overall SBE goal. The actual SBE participation totals over $8 million, of which nearly 90 percent are committed to San Francisco based SBEs.”

With the support of GSW, Mortenson | Clark will use outreach initiatives like CityBuild to develop a comprehensive training program for San Francisco residents.

The design phase is currently underway as Mortenson | Clark and GSW Arena’s larger design group work as an integrated team to deliver the project.