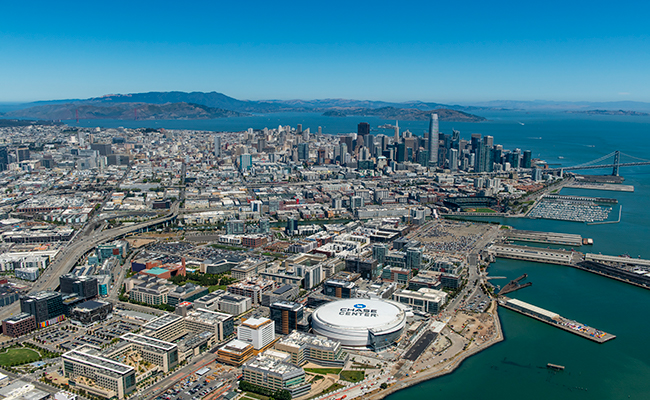 Mortenson | Clark have achieved substantial completion of Chase Center, San Francisco’s new state-of-the-art sports and entertainment complex. The joint venture team handed over the keys to the $1.4 billion facility on August 1, marking the end of a successful 30-month-long construction effort. With construction complete, Chase Center’s operations team will move into their new facility to begin preparations for the venue’s first event on September 6.

The centerpiece of the vibrant Chase Center campus, newly-dubbed “Thrive City”, is an 18,000-seat arena that will serve as home court to the six-time NBA Champions Golden State Warriors, and as a hub for nearly 200 events annually. The venue anchors an 11-acre site that also includes two 11-story office buildings, both components of ride-hailing firm Uber’s new corporate headquarters. The new community destination also features an iconic glass-enclosed gatehouse, over 20 unique retail locations and 3.2-acres of publicly-accessible plazas and open space, as well as a 925-space, below-grade parking structure.

A beacon on the San Francisco Bay, Chase Center is equal parts sports arena and performance hall. Starting next year, the venue will feature a flexible seating bowl that can be reconfigured to accommodate sell-out crowds at basketball games or play host to intimate theater performances. Two public entrances flank the arena’s east and west ends and are sheathed in curtain wall expanses up to 75 feet tall. Inside, the amenity-rich facility includes myriad features designed to enhance the fan experience, including 44 club suites, 32 courtside lounges, 60 theater boxes, premium lounges, and concourse areas replete with an array of local food and beverage options.

In total, the Chase Center project encompasses more than 2 million square feet of construction spread across five structures. “A project of this scale and complexity doesn’t happen without trust and collaboration – among our partners in the field and throughout every level of this team,” said Jim McLamb, Mortenson | Clark’s Project Director for Chase Center. “We had an exceptional pool of talented and determined project partners, all rowing in the same direction and working toward the same goal. At the end of the day, that translated into a high-quality end-product delivered on time, and in the safest manner possible.”

San Francisco’s newest landmark is a product of an intensive construction planning effort that began nearly five years ago and continued throughout the life of the project. To achieve date-certain delivery, Mortenson | Clark harnessed advanced 4D modeling and developed an innovative construction approach that involved unraveling the arena from other structures on site and sequencing construction around its four structural cores. Under this plan, each quadrant of the arena had its own schedule for concrete and steel, and each level had its own schedule for mechanical, electrical, plumbing, and finish work. This approach ensured all levels of a quadrant were progressing at the same time and allowed the project to advance at the quickest rate possible.

Chase Center’s aggressive schedule required crews to place as much as $2.3 million of work daily at peak construction. Despite a demanding schedule, and a diverse workforce that included as many as 1,500 craftworkers on site at one time, Mortenson | Clark maintained a stellar safety record, demonstrated by a recordable incident rate that is four times below the industry average.

“Chase Center is the result of the significant contributions of more than 9,500 craftworkers, men and women – a large contingent from San Francisco, all coming together to deliver a world-class facility that San Francisco can be proud of,” said Trevor DeLong, Mortenson | Clark’s Senior Superintendent in charge of field operations on the project. “Mortenson | Clark worked to build a culture on site that fostered productivity and collaboration, while maintaining a laser focus on safety, every day, without compromise. It was an extraordinary team effort.”

Chase Center will make its official debut in September when rock legend Metallica performs alongside The San Francisco Symphony; an impressive lineup of concerts and events will follow. The Warriors will take their new home court for a preseason game against the Los Angeles Lakers on October 5.