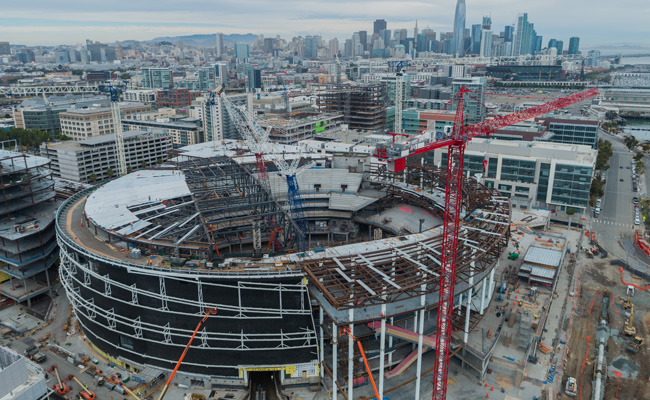 The Golden State Warriors’ game plan to build an 18,500-seat arena and mixed-use development in San Francisco looks tougher than a three-pointer at the buzzer.

The $1-billion project is more than halfway through construction, filling an 11-acre site hemmed in by dense development, including the Mission Bay campus and hospital of the University of California, San Francisco. The Chase Center arena, office towers and retail and parking structure sit at various depths in mud and fill from the city’s 1906 earthquake, just a few hundred feet from the bay. A structural concrete slab and 1,500 piles drilled into bedrock protect the arena and surrounding buildings from water, settling soil and seismic forces.

Construction began in January 2017 on the privately funded project, which includes the approximately 1-million-sq-ft arena and two 10-story office towers as well as 100,000 sq ft of retail. Managed by joint venture partners Clark Construction Group and Mortenson Construction, the project has completed 1.5 million craft hours, with 900 workers currently on site and a projected 8,000 workers overall. The arena itself is built around four 120-ft-tall concrete cores topped by a 350-ft long-span roof held up by four main 500,000-lb steel trusses. Magnusson Klemencic Associates (MKA) was the project's structural engineer.

The team’s 200-page monthly playbook for the design-assist project is a race to the roof, aiming to install the trusses as quickly as possible. The arena itself is sliced into sections, with each quadrant on a different mini-schedule to finish concrete, steel and other construction. It’s a demanding schedule, says Peter Bryan, the Warriors’ vice president of construction and development, but it is necessary to complete the project in time for the start of the 2019-2020 NBA season.

“Mortenson-Clark has orchestrated a pretty amazing dance out there, when you consider all the craftspeople, all the deliveries, all the equipment,” Bryan says. “Unlike an office building or other types of development, when we set our end date for a start of season, that’s fixed.