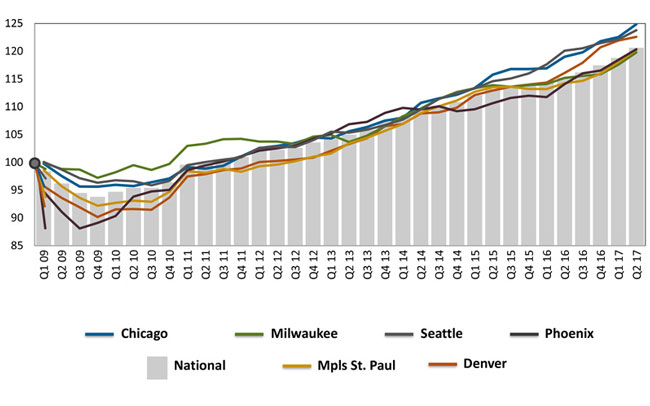 With supplies of some key materials, equipment and labor tightening, Mortenson Construction has raised its estimate for non-residential construction cost increases in Chicago for 2017 from 4% to 4.5%, the highest among the major markets that the national builder and developer tracks. This year’s increase follows a 2016 jump of 4.3% in Chicago, according to the Mortenson Construction Cost Index.

“Chicago construction activity initially lagged other markets in recovering after the 2008 recession, but it has gradually caught up and is strong now,” said Dennis McGreal, Chief Estimator for Mortenson Construction’s Chicago office.

In the second quarter alone, the Chicago index climbed 1.9% and is up 4.9% over the same period in 2016. Costs for eight building component categories, including steel framing, fire protection, earthwork and plumbing systems, grew between 2.2% to 3.5% in the second quarter, noted McGreal. Another seven categories, such as elevators, gypsum board and HVAC systems, escalated at least 1.5% during the same period.

Companies with projects underway or in the planning stages are pivoting in reaction to increasing costs and market activity. “With local precast contractors very busy, procurement lead times have extended and pricing has increased. We have clients reconsidering which cladding system to use,” noted McGreal.

“For the $505 million Mercyhealth Riverside Campus Mortenson is building in Rockford, we foresaw a potential labor and schedule challenge. The decision was made to have Mortenson prefabricate exterior metal stud wall panels at an off-site facility. This approach had the advantage of improved quality, labor control and expedited the schedule for enclosing the building,” McGreal explained.