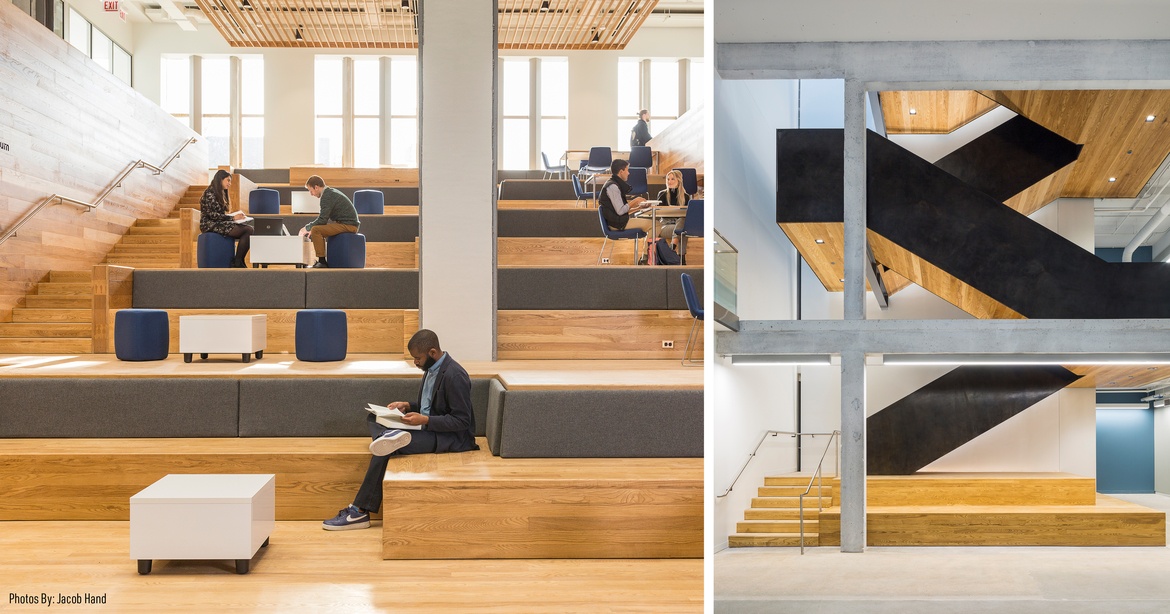 Wood panels in the renovated 1963 building come from trees felled by the emerald ash borer. Artist Theaster Gates, who hired local residents to mill the trees, used the wood in a light-filled, four-story common space.

Theaster Gates was more than thrilled to say yes when the administration at University of Chicago's Harris School of Public Policy asked him to lend his artistic eye to its new home. That new home, an $80 million renovation of a 1963 building on the south edge of campus, opened about two weeks ago.

"I was so excited that the building was being restored that I wanted to demonstrate that excitement by being as supportive as I could with the restoration," says Gates, who lauds the efforts to make the area south of the Midway more integral to the campus. "It's a pretty significant psychological shift that means that the south side of campus is actually an important part of the life of the neighborhood," Gates says.

The move comes at the right time for Harris, where enrollment has nearly tripled over the last five years. The school long ago outgrew its former quarters at 1155 E. 60th St. "Today's generation of rising leaders looks at the world and wants to get engaged," says Katherine Baicker, dean of the school. "People are diving in and getting the tools they need; that's a wonderful sign of things to come."

The building, designed by Edward Durell Stone, originally housed continuing-education programs at the university. Over the years, it served as conference space and, most recently, student housing. The university announced plans to renovate the structure back in 2014, and renovation kicked off with $32.5 million in donations from Dennis Keller, whose name is on the building, and King Harris, for whom the interior forum is named.