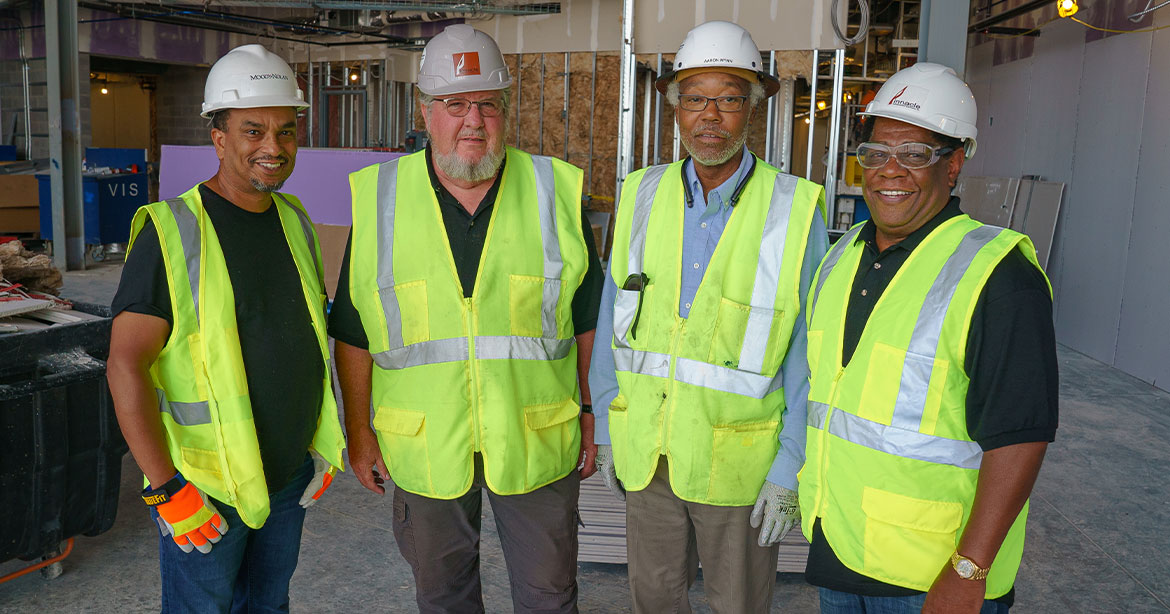 It was a big win for women- and minority-owned businesses.

As general contractor on Nashville’s GEODIS Park, Mortenson and its partners set aggressive diversity goals for those who worked on the $335 million soccer stadium. “I honestly don’t know of another project with such a major commitment,” said Mike Carter, managing partner and co-founder of Pinnacle Construction Partners LLC.

GEODIS Park was brought to life over two years by Mortenson in a joint venture with Cincinnati-based Messer Construction. And Pinnacle, Nashville’s largest Black-owned general contractor, was one of many partners and subcontractors to work on the 30,500-seat venue, which opened to the general public in May. “We as a group had a goal of a 30% spend with women- and minority-owned businesses,” Carter recalled. “At the end of the day, the number we achieved was 36 percent.”

He added: “That wouldn’t happen without progressive-minded leadership who want to make a difference.”

By now, Minneapolis-based Mortenson has 35 years of experience building America’s top sports arenas. At the same time, Mortenson has strengthened its commitment to women- and minority-owned construction businesses in the cities and towns where these facilities rise. “Putting money back into the community as opposed to hiring out-of-state or out-of-town contractors is huge,” said Rita Dancey, CEO of Nashville-based Maryland Electric Company LLC, one of 39 women-owned businesses to work on GEODIS Park. 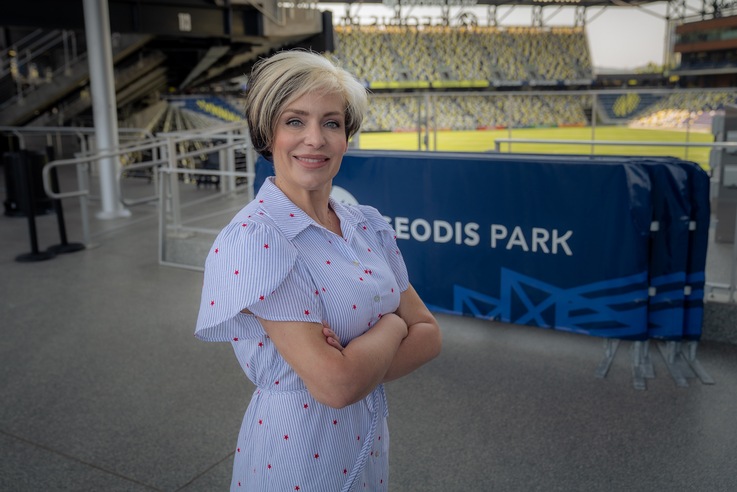 In the case of Pinnacle, the 22-person company previously partnered with Messer on projects including an airport and a university student union. Messer approached Carter again in 2018 for help with bidding on GEODIS Park. That was Pinnacle’s introduction to the world of Mortenson and the wealth of opportunity in professional sports. “I take my hat off to Mortenson,” Carter said. “Lord knows, stadiums are a growth industry right now; there are a number of NFL teams looking to build them.”

With GEODIS Park on its resume, Pinnacle went on last year to land the general contractor role  on another sports project: Nashville Soccer Club’s new practice facility, a multimillion-dollar project set to open in late 2022.

For the first time in Nashville history we have a Black general contractor, a Black architect firm, and a Black owners rep. We would not be in this position if not for the opportunity to work alongside Mortenson and Messer.
Mike Carter
managing partner and co-founder
Pinnacle Construction Partners LLC 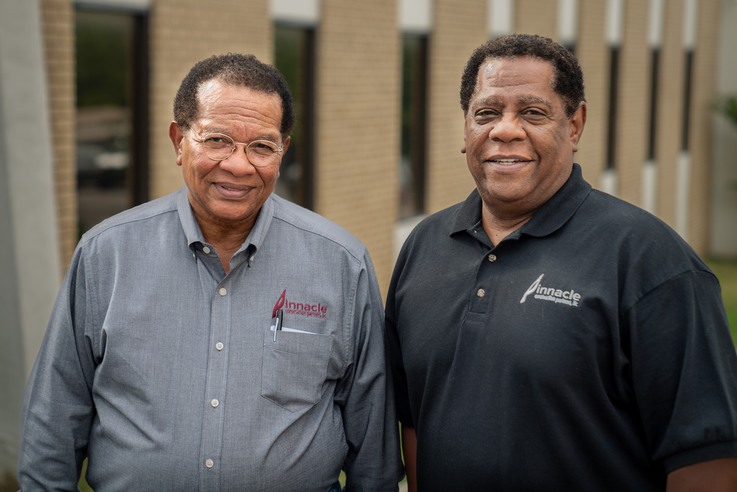 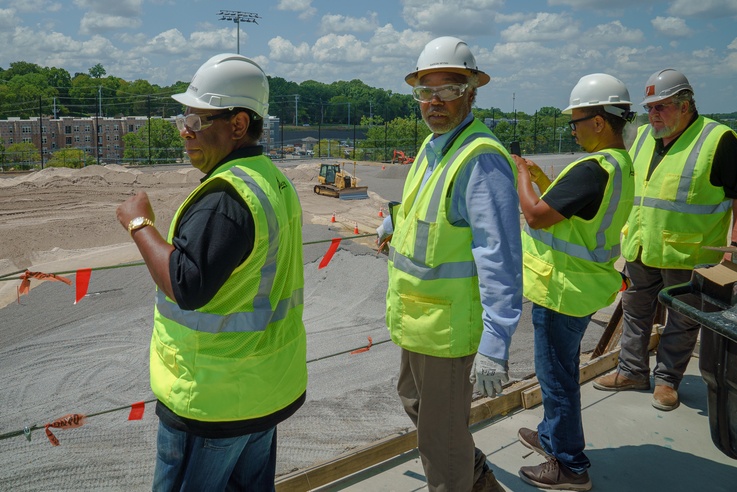 In the American business world, the idea of supplier diversity dates to the civil rights era. According to Harvard Business Review, General Motors set up one of the nation’s first supplier diversity programs in light of uprisings in Detroit following the 1968 assassination of Martin Luther King Jr.

In 1978, Congress amended the Small Business Investment Act (originally passed two decades earlier) to require companies with large government contracts to set goals for hiring diverse subcontractors and suppliers. A diverse supplier, by most definitions, is more than 50% owned and operated by a member of a historically underrepresented group. That definition was expanded in the 1990s to include women.

“There is not a single women- or minority-owned business who wants to be used because there’s a goal on a project,” stressed Barb Lau, executive director of the St. Paul-based Association of Women Contractors. But in practice, government funding for large projects such as airports and stadiums can serve as a motivator, encouraging large construction companies to reach beyond their usual roster of subcontractors.

Like much of the construction industry, Mortenson started out by setting diversity goals on a project-by-project basis, as encouraged by government rules. That changed in 1996 with the hiring of Lynn Littlejohn, currently vice president of community empowerment, who was the first to focus on diversity initiatives companywide. From there, the company intensified efforts to make the construction industry more truly inclusive.

“It was really about: how we lean in and actually ensure there is robust, real, meaningful participation on our projects,” Littlejohn said. High-water marks include the John B. Davis Education and Service Center for Minneapolis Public Schools, completed in 2012 with women- and minority-owned businesses comprising 53% of trade partners. There was also the Keller Center, home to the University of Chicago's Harris School of Public Policy, completed in 2018 with 47% women- and minority-owned subcontractors and suppliers. 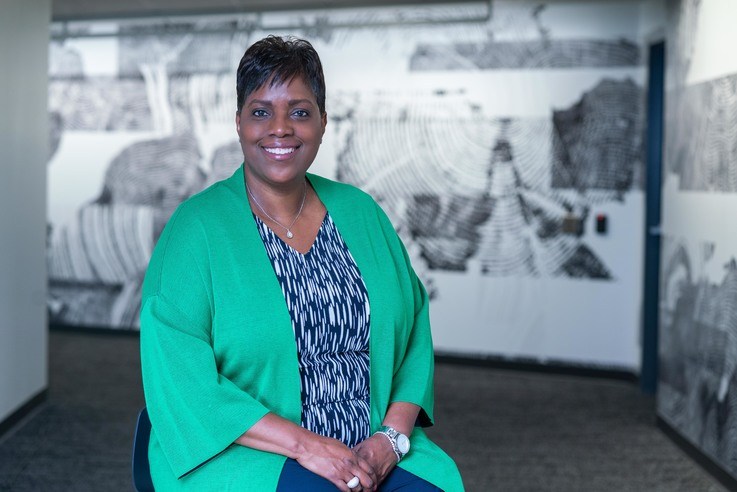 Over the years, Littlejohn has led Mortenson beyond “check-the-box” approaches to supplier diversity. “We’ve taken the position that we’re a leader,” Littlejohn said. “So this matters to us across the board – not just when the customer says it should.”

The strategy evolved from reactive to proactive, from transactional to relational. Take the example of Viking Engineering and Construction, a minority-owned business in Portland that has worked on many Mortenson projects over the years, including the $224 million Hyatt Regency at the Oregon Convention Center, completed in 2019.

Over 10 years, Mortenson’s Portland office took on a mentor-protégé relationship with Viking, according to Lindsay Verdugo, a member of Littlejohn’s team. “We’ve seen Viking grow from a two-person company; now they have over 50 employees,” she said.

“And as we’ve watched Viking grow,” Verdugo continued, “their needs have changed. They’ve been able to approach our leadership team for guidance on how to navigate a growing business.”

Today, Viking is a key Mortenson partner on the Multnomah County Behavioral Health Resource Center renovation, a roughly $15 million project set to open later this year. “They have a full-time staff person on-site with us,” Verdugo said. “They’re learning the ropes of a larger construction project – how to run a larger crew.”

In 2022, Mortenson unveiled a new name for this work: Community Empowerment. According to Mortenson Senior Vice President Krista Twesme, the rebranding reflects a redoubling of efforts to welcome those from underrepresented populations into the construction industry while “giving them the skills, the knowledge, the experience to continue in their careers in a way that would be more accelerated than if we hadn’t come to their community.”

The goal is transforming communities through economic inclusion. It means replicating what Mortenson did with Viking Engineering and Construction. It means building up even more women- and minority-owned partners for long-term excellence and success. As Littlejohn put it: “It helps those businesses, but in turn it helps our industry by increasing the pool of vendors and suppliers.”

The whole idea of Community Empowerment is a win-win for everyone. For people working on the project. For the companies they work for. For Mortenson, for our customers, for the community. It really does spiral upward.
Krista Twesme
Senior Vice President
Mortenson

Video and photos by Mitchell Jordan